FICCI to set up National Knowledge Functional Hub, FICCI Center of Excellence for Grass root Initiatives and Development in the state

On close heels of enacting the landmark A.P. Private universities (Estb. & Regulation) Act 2016 that permits private companies to set up universities as part of efforts to create world-class centres for higher learning, the Andhra Pradesh government has ordered a reconstitution of university executive councils across the state to include eminent people from various fields including the industry. The curriculum will contain a chapter on innovations at levels. It will be also setting up exclusive universities for water resources and solar energy for cutting edge research and development in these critical fields.

Letter of Intent has been signed for eight Greenfield private universities in Andhra Pradesh at an investment of Rs. 9000 crore. These universities will, in the next 10 years enroll 100,000 students. Several other major proposals were also being processed with a view to making Andhra Pradesh the education hub of the world. 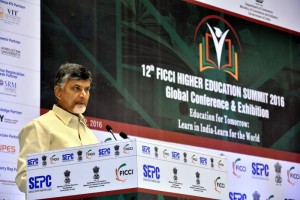 Outlining his ambitious plans for turning the state into a ‘silicon valley’ of higher education, Chandra Babu Naidu said for sustainable development, we need qualitative human resources which can come from a robust higher education system only. “I am hopeful that Andhra Pradesh will have abundant human resources not only for its needs for supply to outside world as well as  we bring top universities to the state. We’ll bring down our teacher student ratio down to international level in two years and we have told our education planners to study best curriculum in the world and bring it here along with best practices” he added.

Demonstrating his personal commitment to improving higher education, the chief minister said innovation holds the key. Recalling how his plans for providing high speed optic fibre had hit the wall for it required massive funds, Naidu revealed that after much brainstorming, they got this innovative idea of using existing power supply lines to carry the fibre at a fraction of the estimated cost. “We’ll take fiber to the last mile and provide our people and institutions digital connectivity.”

Chief Minister said that higher education in Andhra Pradesh has focused on strengthening state universities, establishing premier national institutes and attracting private sector investments into the higher education sector, among other reforms.  His government signed two MoUs with FICCI to set up National Knowledge Functional Hub (NKFH) for sustained Industry-Academia engagement resulting in employability of engineering graduates in Andhra Pradesh at The Sri Venkateswara University (SVU), Tirupati and   ‘FICCI Center of Excellence for Grass root Initiatives and Development’ in Amravati.

(This story appears in Dec 2016 issue of Curriculum)