The WorldSkills Competition 2022, conducted in a decentralized mode from September 3, 2022, to November 28, 2022, across Europe, North America, and East Asia after it was cancelled for Shanghai following Covid 19 outbreak earlier, proved good for India as it secured the 11th position by winning 2 Silver Medals, 3 Bronze Medals, and 13 Medallions of Excellence and thereby moving up by two ranks from the previous 13th position in 2019.

Among the winners, Nandita Saxena won a silver medal in patisserie and confectionery trade and Anushree Srinivasan bagged a bronze medal in hotel reception skill. ITI qualified competitors also showcased a remarkable performance by winning 2 bronze medals, one each in Prototype modelling and Mechatronics skill apart from winning2 Medallions for Excellence in Autobody repair and Automobile technology skill. India continued its dominance in Water Technology skill by winning a Silver medal.

Skills being the foundation of modern life, from the houses we live in, to the societies we create, is the result of skills. They are the driving force behind successful careers and companies, thriving industries, and economies. Skills keep the world working and the world’s Vocational Education and Training (VET) leaders unite as Members and partners of WorldSkills to advance skills promotion within their own country and region, and around the world. In India, the selection of candidates who represent India on this global stage is carried forward by National Skill Development Corporation (NSDC) under the aegis of Ministry of Skill Development and Corporation (MSDE) through IndiaSkills Competition, the country’s biggest skill competition. 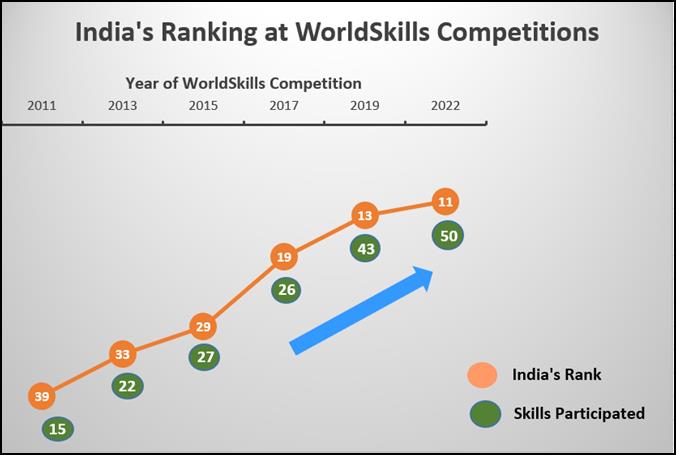