The 2nd edition of  national rankings by the union ministry of Human Resource Development  under  the National Institutional Ranking Framework (NIRF) released on April 3 displays supremacy of public (Govt ) HEIs.  The first ever degree colleges ranking is dominated by southern states though six DU colleges figure in top 10     see 100 ranks on (https://www.nirfindia.org/ranking2017.html) 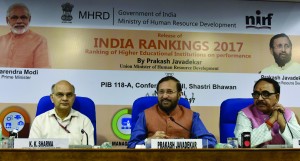 While releasing the rankings in New Delhi, union HRD minister Prakash Javadekar said this ranking is meant to have beginning of a fair competition among the institutions for achieving excellence in their efforts. This has recorded success beyond any doubt and is bound to march ahead. The Minister on this occasion also announced that government will extend more help to quality education institutions. It’s a vital change of policy and will motivate all the institutions to perform and excel. Factors regarding number of research papers submitted, patents obtained and campus placement figures will also count for seeking government support. He said importance to public perception, employer perception and academic perception will also be accorded.

The parameters used for India Rankings 2017 are broadly similar to those used last year. However, at the level of detail, some of the sub-parameters have been tweaked for a more robust system of rankings. In particular for evaluating Research Impact, parameters for quality of publications have been enhanced to include the number of highly cited papers, in addition to the usual parameters of publications per faculty and citations per paper. Innovations have also been made in improving the scoring metrics, where the “percentile” metric has been replaced by a more discriminating metric. All research related information, including publications, citations, highly cited papers and even patent information about institutes was collected from third party databases (from our industry partners) to obtain an objective and unbiased picture. For this year’s Perception inputs, a large data base of academic and industry peers and employers was deployed, in addition to getting inputs from members of general public. Finally, some provision has also been made for the scale of operations of an institute in terms of the size of its student population and graduated doctoral students.

According to K K Sharma, secretary higher education, the data received from both institutional and third party sources were subject to extensive scrutiny for consistency and correctness by a team of experts. As per the declared time-schedule, the rankings are being announced on the first Monday of April. The Rankings List includes 100 institutions each in the Overall, University, Engineering and General College Categories, and 50 each in Management and Pharmacy Disciplines. Additional rankings in suitably bunched forms are also being provided.

Although the Central Government funded institutions, in general continue to do well, some of the state-funded universities also are prominent. Some private institutions and universities have also been quietly climbing up to take high positions, thus offering value for money to their students, going by their ranks. Some of these institutions have consistently maintained or improved their positions of last year, clearly indicating that it was not a one-time fluke event. This is clearly a satisfying development in Higher Education.

Finally, a very exciting feature of this year’s Rankings is the ranking of General Degree Colleges in Arts and Sciences from across the country. While many of the names appearing in the top-100 list are well known and famous, there are many others who may not be so well known but have fared well. Clearly these need to be watched out for in future. “There are also a few notable absentees here as also in other categories, due to their non-participation. We hope that there will be more enthusiastic participation in the years to come”,  Sharma added.