In a truly inspirational benchmark of celebrating the power of education and bringing education narrative  into public and governance discourse , Rajasthan led the way by staging the first ever Festival of Education in India at Jaipur Exhibition and Convention Centre, Jaipur over two days on August 5-6.

The festival held in partnership with Dubai-based GEMS Education (esb 1959, now a subsidiary of Varkey Group Limited founded and managed by Sunny Varkay and valued at over $ 4 billion and runs school chains, teacher training and consultancy and is  present in over 19 countries including India encompassed almost  aspect that comes under effective education and learning- from inspiring students through compelling talks by prominent leaders to influencing parents to let children follow their passions. This festival trumpeted the need for quality education, teacher dedication and a provision of a holistic environment where students with all their capabilities flourish and become contributors to national development.  “I strongly believe that the two-day Jaipur education festival has given us the confidence and conviction to become agents of lasting changes in our education system that will ultimately go on to determine our future and that of our nation, “said Amreesh Chandra- Group President, GEMS Education.

The festival of education around the theme of One Young Rajasthan is being adopted by the state on lines of Jaipur Literature Festival and unlike the lit fest, this festival will travel to different regions of the state every year as the government also wants to showcase the state and its educational achievements. The next edition will take place in Udiapur.

With several expert and key note speakers including union ministers –Prakash Javadekar (HRD) and Rajiv Pratap Rudy (Skills) addressing various sessions in the deftly planned and high voltage extravaganza filled event as per organizers had a footfall of nearly 1.8 lakh people which included a good number of delegates from abroad and nationally besides school students, parents and teachers from some parts of the state. The state government was represented by the chief minister herself who almost sat through the two-day event and was much engaged with the proceedings.

The festival of education, Jaipur, managed to generate a genesis of collaborations and co-operations from both international and national delegates resulting in a pact with British Council to provide integrated support in spoken English, establishment of University of Yoga in Rajasthan by yoga artist Bharat Thakur as well as Shankar Mahadevan’s promise to open his first academy in the state. His Highness Sheikh Nahayan Mabarak Al Nahayan – Minister of Culture and Knowledge Development, UAE, who was the chief guest at the inaugural ceremony of this high profile event announced introduction of an exchange program for cultural learning and knowledge between Rajasthan and UAE whereas South Hampton University, UK is all set to work with Rajasthan in providing Wi-fi facilities in the dark areas.

Union HRD Minister Prakash Javdekar while underlining the importance of education said that  the countries focusing on research and innovation will prosper as prosperity based on natural resourced had its own constraints of time. He also informed 24 states were on board on proposed amendment on ‘no detention policy’ under RTE Act. He also said that Rajasthan is emerging as a model state in school education arena He also revealed his plans to make country’s population fully literate by training class 6-12 students to teach at home.

Sheikh Nahayan Mabarak while calling education a national resource said that education had potential of enabling the world end all economic inequalities and discriminations. He said that only education could save a society from differences and establish multiethnic cultures. It would be the best idea for ensuring prevalence of peace, stability and prosperity in the world.

Vasundhra Raje said that given the geographical and demographical circumstances of the state, providing quality education to the children here it was a big challenge. Accepting this challenge, her government brought big changes in the educational set-up and made it learning based. She said that teachers were important for making of any nation and they should adopt themselves to the upcoming changes. For this, the government was improving their skills and capabilities by providing them training for new teaching methodologies and syllabi. Raje said that realizing the fact that mere degrees were not enough for the youth to upsurge in life, the state government had focused on skill training along with basic education. Rajasthan was amongst the top state in providing skill education to its youth. Also, two new skill universities had been established here, she said. She invited the private sector establishments to invest for development of basic infrastructure in education. CM launched also an education CSR portal Gyan Samkalp. 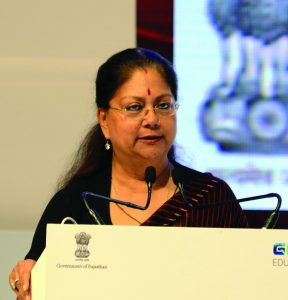 The closing ceremony an experiential musical night, indeed welcoming the change and marking the beginning of an active state was hosted by the effervescent actress and model – Gauhar Khan. The Festival of Education celebrated the genius of all kinds, proposes to empower talents and thus plans to churn out each student’s maximum potential. Even so was every activity at the ceremony including a performance by the Shillong Chamber Choir with their Vande Matram symphony. Dancing on the theme of One Young Rajasthan, were the school students choreographed by Dharmesh Yelande. The winners of the Battle of Bands – ‘The Musafirs’ were also awarded  by Kiran Maheshwari, Higher Education Minister Rajasthan , followed by their presentation.

Promoting young talent was one of the priorities of this festival. Recognizing hard work and innovative thinking were a set of awards to the winners of the Big Data Challenge Competition by Higher Education Department beginning with 1st winner bagging a Rs. 1 Lakh. To rejoice the success of this event came in Sona Mohapatra with her band and stormed the stage with her voice.

The eminence of a dedicated mentor was discussed thoroughly in the event with all delegates re-iterating the fact that teachers have more than half the responsibility of changing the state of education. In the light of the same, a special Teachers Contributions Awards by the Secondary Education Department took place where teachers from across the state were recognized for their outstanding benefaction in schools. Sangia Sharma,Kota; Rajendra, Bikaner; Om Singh Bhakti, Kumar Mkicha, Chandauli (for excellent services); D. Ravikumar, Chittorgarh, Shravan Kumar, Bundi; and Amar Lal Sharma, Bhilwara were among those awarded bu Governor  Kalyan Singh.

Overall, the Festival of Education beginning at Jaipur was a benchmarking event.