On July 11, 2021 the newly established University of Engineering & Technology Roorkee (UETR) was formally inaugurated by the Governor of Uttarakhand, Baby Rani Maurya in presence of Dr Dhan Singh Rawat, Minister of Higher Education, Uttarakhand and former CM Trivendra Singh Rawat. The commencement of the UETR is dream coming true for Seth RoshanLal Jain Trust (SRLJT) and its chairman J C Jain, who has been instrumental in enriching the education landscape of Roorkee first with College of Engineering Roorkee (COER, esb 1998) followed up now by UETR, COER College of Paramedical and Nursing Sciences and COER Medical College of Ayurveda and Hospital. 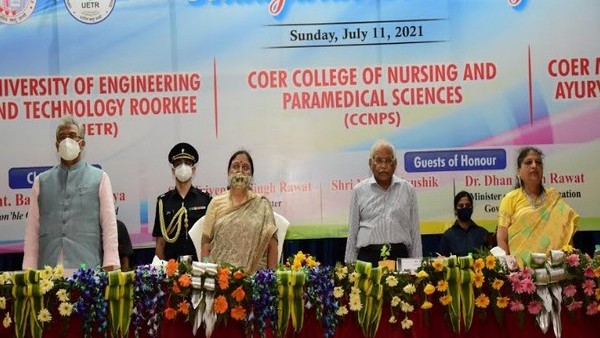 In an interview to Autar Nehru, the founding Vice-chancellor of UETR, Dr (Prof) S P Gupta, a former distinguished professor of electric engineering at IIT-Roorkee (1976-2018) and a former deputy director of IITR, who has been Director General of COER since 2018 and now made VC of UETR, talks about the university’s vision, plan and admissions.

Dr Gupta, Congrats for this new university. Tell us about the university, what inspired it and how are going forward?

In 1998, our chancellor, Mr J C Jain, who is an alumnus of BITS Pilani in Industrial Engineering and a stellar entrepreneur of Uttarakhand state, brought private higher education to Roorkee. And all these 23 years, College of Engineering Roorkee has flourished and produced proud students who are now working globally. So, building on that the idea of university was only a next logical step and the Government of Uttarakhand approved the university through an Act on Feb 15 this year and on July 11, the honourable Governor and three ministers from state government joined the launch. Now, we have started admission process and we’ll start our first academic year this year itself.

If I am correct, UETR is not the converted COER? COER status has not change?

Yes, that is correct. Actually, we have a 75-acre campus where currently all institutions including UETR are located. We have taken the building that housed management studies as the UETR building and two new buildings are coming up and in due course of time, the infrastructure wherever needed will get added up. There are virtual boundaries between these insinuations and for practical purposes, students will continue to have advantage of all the facilities.

Logically, it would have been ideal to make all of this part of new university?

I can’t talk of distant future, but at least for next five years, our plan is not to do so. That has a reason and I’ll share it. We are a private provider of higher education and our revenues come from fees only. We have a lot of student population coming from Bihar, eastern UP, Nepal and other places, where COER has already become a brand name. So, we don’t want to change that. UETR will come up on its own strength and emerge as popular.

Now, that means students have now one more opportunity and capacity augmentation through UETR ensures that. Tell us in brief, what will UETR offer and what is the intake?

As of now, we will start with four schools— School of Computing, School of Business Studies, School of Smart Agricultural Science and, School of Creative Arts and Design.  School of computing will offer specialized B Tech programs in Artificial Intelligence, Machine Learning, Data Science and Cyber Security and PG programs. In Business Studies, besides MBA and BBA we’ll also offer B Com (Computerized Financial Accounting).  In computing we are expecting to take 300 students initially and an equal number for other three schools, so we are looking at an intake of 600 at the moment.

What is the USP of your new courses and how are these attractive than similar programs offered by others in your own state?

Our curriculum and philosophy is in consonance with the New Education Policy of the Government.  Our emphasis is in built-in practical skilling, internships/mentorship, research-based knowledge, multi entry and exit under academic bank of credit (ABC) policy and affordability. Also, the interdisciplinary campus will put our students to an advantage.

In terms of facilities and faculties, how do you plan to provide quality assurances?

As I said, there are only virtual boundaries between us as university and other institutions under SRLJT and they are always there to support us. Then, Roorkee has two public institutions—IIT-R and Central Building Research Institute, Roorkee. As public institutions, they do extend some support in terms of access to labs etc to other neighbourhood institutions. The current pandemic has made us to set up a good online system and we have associated several distinguished professors and educators from all over the globe as distinguished mentors. They will offer a kind of handholding to students and help us in delivery of an up to date curriculum. From within the country, we have similar resources persons on-board such from IITs and a few leading industries. We have also entered into collaboration with international universities like University of Kentucky, USA where our students will get opportunity to work in projects and online lectures.

Lastly, tell us advantages of studying in Roorkee as a destination?

Roorkee may not be a metro city but nothing is amiss here for anyone coming to study. With IIT, it has a culture of education, our campus itself is a town outside the town. Then, Dehradun, Mussoorie and Haridwar are not far off; one can plan an excursion or a hangout. With an airport nearby, we are well connected by road, rail and air. With today’s virtual world blurring into real world, you’re always connected.