Global Schools Foundation (GSF) running a global network of 35 campuses under Global Indian International School (GIIS) brand in Singapore, Malaysia, Japan, Thailand, UAE, Philippines and India organized its first ever first-ever interschool Online Chess Tournament 2022.  GIIS Noida played the host and in all 600 students aged 8 to 18 years from10 schools competed in Under-8, Under-10, Under-12, Under-14, Under-16 and Under-18 categories.

Mitul KH from GIIS Whitefield, Bangalore made a clean sweep in the U-12, U-14 and U-16 boys category, punching above his weight, and winning all three contests. Aditri Shome from GIIS Ahmedabad and Gauri Aditya Chari of GIIS Hadapsar won the first spot in Girls U-12 and U-14 categories. Riya Pachouri from GIIS Noida showed similar feat winning the U-16 and U-18 categories for girls.

Aditya Dongre (Boys) from Smart Campus, Singapore won in the under 18 boys category. 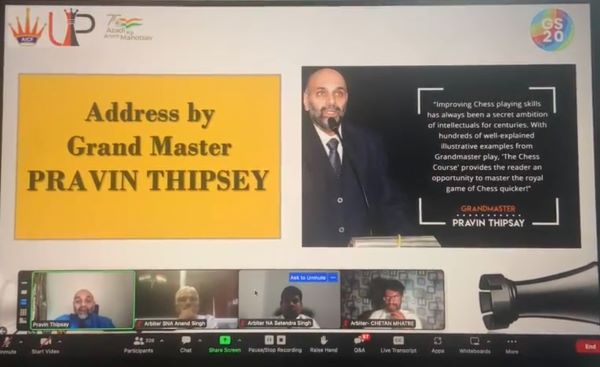 The three-day (Aug27-29) tournament, graced by Indian Grandmasters couple Pravin Thipsay and Bhagyashree Thipsay. It was an exciting event in which students from Singapore, Tokyo, Dubai, Abu Dhabi, Malaysia and India vied for the gold in six different categories. Thipsay, who holds the FIDE title of Grandmaster and is also the first Indian to win the Commonwealth Chess Championship, congratulated GIIS Noida and GSF for conducting the chess tournament. “Chess is a sport that can be played online, and has the ability to sharpen the brain,” he said, expressing amazement over the “600 participants at the event which made it almost as big as Indian National level chess championship”. He further wished good luck to all the participants and encouraged them to pursue the game diligently. “Never play chess half-heartedly, love the game and play it”

“This was a fantastic event of camaraderie, healthy competitive spirit, and triumph, which showed how much importance the ancient sport of chess holds in today’s world,” said GIIS Noida principal, Ganesh Sharma. “I congratulate each and every student, not just for winning but for participating as well, and keeping the flame of the sport burning,” he added.