A NCPCR report published in March this year which analyses data from 23,487 minority schools across the country, says a little over 37% of total students in minority schools belong to these communities. The report got media attention recently and its findings are being debated. Speaking to Indian Express, NCPCR Chairperson Priyank Kanoongo said, “The aim of the study was to assess how the 93rd Amendment, which exempts minority institutions from the otherwise mandatory provisions of Right to Education, has affected children belonging to minority communities and whether there has been a gap.”

Among the major recommendations is “Need for appropriate steps to extend the provisions of RTE to minority educational institutions or make law with similar effect to ensure RTE of children studying in minority educational institutions.” This has been a demand ever since RTE Act was enacted and given the rate at which minority schools have grown all these years, there is merit in this recommendation as the exemption has been made as an escape route from the provisions of the RTE Act.

While considering the affiliation status of the schools, majority of the schools were affiliated, however a wide range of disparity was observed with 88.61% schools in Gujarat affiliated to a Board but only 13.64% schools affiliated to a Board in Rajasthan. States and UTs like Chandigarh, Chhattisgarh, Dadra & Nagar Haveli, Madhya Pradesh, Rajasthan, Tamil Nadu, West Bengal, Kerala, Jharkhand, Nagaland and Arunachal Pradeshhave 100% schools affiliated. 31.56% of minority schools were reported to be issued the Minority Status Certificate by the State/UT-level Competent Body mandated by the National Commission for Minority Educational Institutes (NCMEI).

The National-Level Body, NCMEI, itself issued Minority Status Certificate to 14.96% schools across states. However, certain private religious groups as well as other Government Bodies were found issuing it in a number of states and UTs like Bihar, Gujarat, Uttar Pradesh, Maharashtra, Madhya Pradesh, Jharkhand, Kerala, etc. Further, 85.33% minority schools secured their Minority Status Certificate from 2006 onwards. A sharp increase was observed in schools securing the Certificate post passage of the 93rd Amendment in 2006. It was found that 62.50% of students in minority schools belong to non-minority communities. In Andhra Pradesh, Jharkhand, Punjab, Chandigarh, Chhattisgarh, Daman & Diu, Dadra & Nagar Haveli, Delhi, Haryana, Madhya Pradesh, Puducherry, Rajasthan, Uttarakhand this percentage goes up to more than 70%.

In the absence of clear guidelines with regards to the minimum levels of enrollment of minority students, the minority schools are catering to only 7.95% of the minority children population in the states. In terms of community, the schools being run by the Muslim community have more than 75% of the student population belonging to the Muslim community. On the other hand, schools established by the Jain community have less than 20% of Jain student population, while schools belonging to Sikh, Buddhist, Parsi and Christian communities have less than 30% students of the respective minority community. Further, only 8.76% of total students in minority schools belong tosocially and economicallydisadvantaged background.

Since minority schools are outside the purview of the RTE Act, there is no compulsion to admit students from disadvantaged backgrounds, with State & UTs like Madhya Pradesh and Chandigarh accepting less than 20% students. In terms of community, only schools belonging to the Muslim community have 24.95% of the student population belonging to disadvantaged background, while schools established by the rest of the communities (including Linguistic Minority communities) have less than 10% of students belonging to the disadvantaged background of the respective minority community. Lastly, only 4.18% of total students received benefits such as freeships, free uniforms and books, scholarships, etc. from schools. There is a wide range of disparity in the number of students receiving such benefits, with schools in Arunachal Pradesh, Andhra Pradesh, Bihar and West Bengal providing benefits to more than 10% of disadvantaged students while schools in Odisha, Tamil Nadu, Dadra & Nagar Haveli, Manipur and Meghalaya not providing to any student.

Summary of the consultation workshops with minority students

Expanding the coverage of Right to Education (RTE) Act to Madrasas: The RTE Act, which guarantees every child in India mainstream school education, irrespective of religion professed, should take precedence overthe Right to Religion. In fact, the implementation of RTE should not be seen as forced but as a moral compulsion.

Introduce General Education subjects in Madrasas: Din-i-Taleem and Buniyadi Taleem need to be equally treated and introduced in the Madrasa. Informal interactions have revealed that parents of this community want their children to be educated under both the systems of education.

Expand coverage of scholarships: Currently, only Government affiliated institutions receive scholarships. Students studying in most madrasas are also not getting scholarships.

Provide access to Health and Sports Facilities: Along with education, health, and nutritional aspect of children in madrasas needs to be looked at. Children must also be encouraged for sports as well.

Ensure retention of students: There should be a local mechanism to monitor dropouts and to ensure 100% retention of children in formal schools. 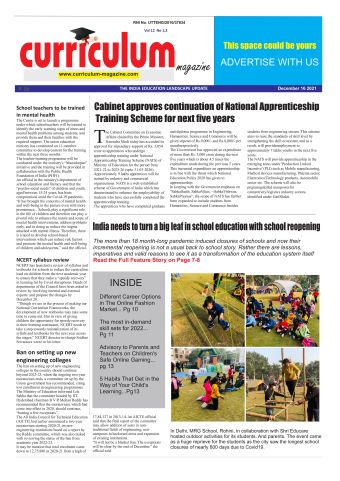