Indian Institute of Technology Roorkee improved four places from last year and has been ranked #5 this year. The Indian Institute of Management Kozhikode was recognised as the 2nd most ‘Innovative’ Educational Institute among Institutes of National Importance, Central University & CFIs (Non-Technical) category and is the only IIM to feature in the top innovation rankings.

Under ARIIA, an initiative of the Ministry of Education (MoE), Govt. of India and implemented through AICTE and MoE’s Innovation Cell  launched three years ago, all major higher educational institutions and universities in India are ranked on indicators related to promotion and support of “Innovation and Entrepreneurship Development” amongst students and faculties. 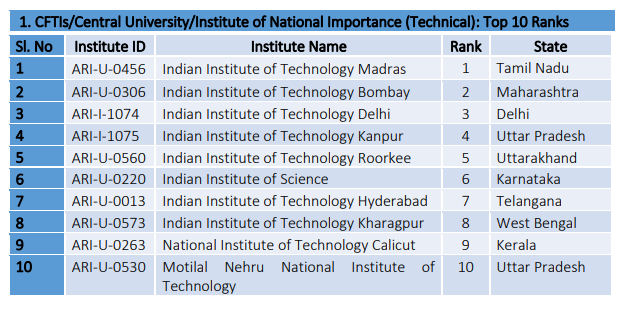 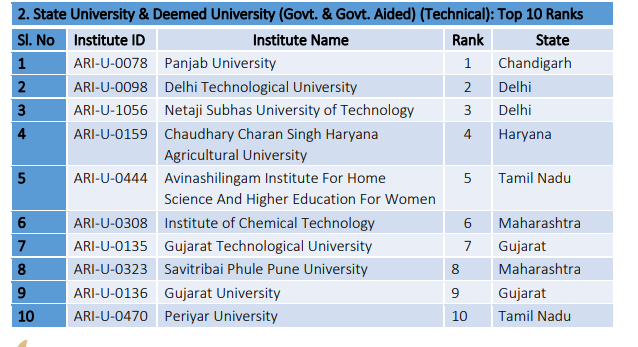 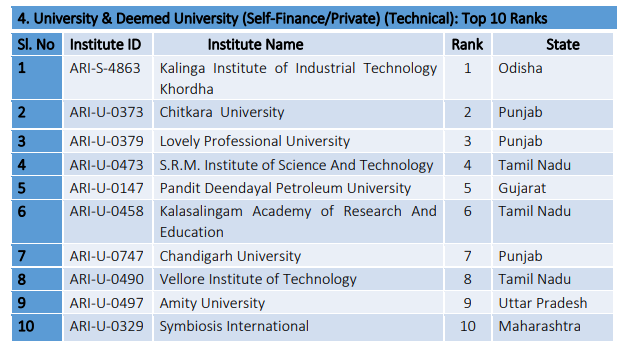 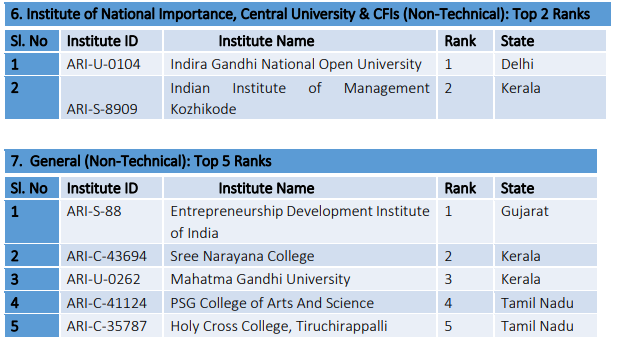 On this occasion, Dr. Sarkar said that ARIIA ranking will certainly inspire Indian institutions to reorient their mind-set and build ecosystems to encourage high quality research, innovation and entrepreneurship in their campuses. Giving emphasis on promoting innovation to achieve a $5 trillion economy by year 2025, Dr Sarkar said that more than quantity, the institute should focus on quality of innovations & research. This will help us achieve the Atmanirbhar Bharat in true sense.

While referring to India’s consistent growth in Innovation and Start-up, Dr Sarkar said that India is one of the largest higher educational systems in the world. There are ample opportunities for higher educational institutions to play the role of enabler to drive Indian innovation and start-up ecosystem. A concerted effort by our higher educational institutions is required towards inculcating the culture of innovation and entrepreneurship among our students and to prepare faculty as innovators, out of the box thinkers, creative problem solvers, entrepreneurs, and job creators. This will definitely bring a revolution not only at economic level but also at the social, environmental front.

The technical category has following 5 sub-categories;

All these submitted applications were subjected to multiple stages of screening, validation evaluation as per the ARIIA framework and guideline developed by the evaluation committee. Based on the score and range developed for the parameters and sub-parameters and category wise score and rank prepared for HEIs. Top-performing technical and non-technical HEIs assigned with a rank and band of ‘Outstanding’ whereas all the remaining technical and nontechnical institutions in each category assigned a band of either ‘Excellent’ ‘Performer’, ‘Promising’ or ‘Beginner’ to encourage their effort and participation in ARIIA.

Chairman, AICTE, Prof. Anil Sahasrabudhe said that indigenous version of innovation and entrepreneurship ranking initiative designed through ARIIA by accounting both national and international contexts, will not only help our Higher Educational Institutions to demonstrate their efforts but also orient them in setting goals at institute level to make India move further up in world rankings.

Highlighting the efforts of Innovation Cell in releasing the ARIIA Ranking, Additional Secretary (Technical Education), Rakesh Ranjan said that ARIIA has set a tone and direction for our institutions. It will help in making them globally competitive and front runner in innovation and entrepreneurship.

Prof Bhaskar Ramamurthi, Director, IIT Madras, said, “We are delighted to be adjudged the Most Innovative Institute for the third time in a row since inception of the Atal Rankings on Innovation. IIT Madras places a lot of emphasis on innovations among its students and faculty, which has resulted in a very successful and fast-growing deep technology startup ecosystem in the country.”

IIT Madras has an ecosystem that encourages innovation and entrepreneurship at multiple levels. These include:

Ø  Nirmaan, a pre-incubator to nurture student ideas mature towards incubation. Some of the startups that came from Nirmaan have been successfully incubated and raised over USD 1 Million

Ø  IIT Madras Incubation Cell (IITMIC), India’s leading deep-tech startup incubator that has incubated more than 240 Startups that have a combined valuation of US$ 1.5 Billion and created more than 5,200 Jobs

Ø  IIT Madras Research Park, which works with more than 75 R&D Clients, hosts Eight Centers of Excellence and Five Incubators besides engaging more than 3,000 professionals in its 1.2 million Sq.Ft of Workspace

Ø  Gopalakrishnan Deshpande Centre for Innovation and Entrepreneurship, which builds capacity in researchers to maximise the impact of deep-tech research through scalable start-ups

The Centre For Innovation (CFI) at IIT Madras is a student body that has augmented the ‘tech’ space in the institute wherein their projects have gone on to produce high-profile start-ups and internationally acclaimed competition teams. ‘Nirmaan’ seeks out students with ideas that have commercial potential and puts them through a one-year pre-incubator programme.

Speaking on his institution’s stellar achievement Prof. Debashis Chatterjee, Director IIM Kozhikode, said “IIMK’s career-best fourth rank in NIRF and second rank in ARIIA makes our silver jubilee year all the more special. Innovation is the bedrock on which IIMK has dared to go beyond traditional boundaries and providing the right motivation and guidance to bolster the entrepreneurial spirit is fundamental to our Vision 2047 of Globalizing Indian Thought. The growth model of this century will be founded on innovation and not on consumption. India will lead the world in Innovation and initiatives such as ARIIA will encourage Institutes like IIMK to usher in the next era of innovators and change makers.”  IIMK has its own business incubator and entrepreneurship development centre – IIMK LIVE, which was established in 2016 with the support of the Department of Science and Technology. The centre is envisioned to function as a business incubator with a purpose of creating a National Centre of Excellence that promotes innovation, new business venturing and entrepreneurship.

Prof Rajat Agrawal, Associate Dean of Innovation and Incubation, IIT Roorkee said: This improvement shows that IIT Roorkee is moving in the right direction for making the Institute an innovation savvy campus. He informed that 18 startups were established during the evaluation period. The filing of patents increased by 50% and four technologies were commercialized during the same period. The filing of IP by startups in the incubation facility of the institute also increased by 100%. These improvements in different aspects of I&E helped IIT Roorkee improve 4 positions in this years’ ranking.”