Home Spotlight Going innovatively Phygital: The experience of WUD’s School of Architecture 2nd year students tells you why it was the best choice to complete project work in pandemic

As Covid19 pandemic lengthened its dark shadows and disrupted campus lives and academic transaction alike, those students and teachers whose learning/teaching depends a lot on lab practicals, hand on training, field visits and collaborative projects were hit hardest in the past one year. However, human spirit and intelligence through ages have invented ways to adapt, survive and evolve. It is now happening in technical education as well. WUD’s School of Architecture 2nd year students just demonstrated that…

Bachelor of Architecture (B.Arch) is a rigorous five-year program and requires regular study trips and practical training besides a lot of collaborative group work. Obviously being one of the top career choices among students and having a tough competition (through JEE), those who eventually make it in country’s some 860 architecture schools, are expectedly diehard enthusiasts and serious students. However, college closures owing to pandemic have put students like any engineering and medical students in a situation where online classes don’t seem to suffice. Finding ways and means to overcome the handicap of not studying in the usual way of observation and hands on experience, has been a mission now globally. And, several models are emerging and a few of them could well be adapted as the new normal in future years.

Sonipat-based University of Design (WUD, esb 2016), even before becoming a university had started B Arch under the World School of Planning & Architecture and in fact, its first batch of 17 is graduating this year. However, here we would talk about its current batch of 3rd year 18 students, who have just completed second year of their program. As part of the course, they were required to undertake architecture design studio project—to enhance their understanding of design and skills. In normal circumstances, students would go to selected site and study it at great detail and work on the assignment.

But 2021 was different. No physical classes, no travel, no meeting ordinary people or officials to gain firsthand knowledge about sites etc. “How can we make architecture studio exciting and promising learning experience is always our aim. We had drawn a list of probable sites for the project and also decided it to look beyond our traditional catalogue. With two students in the batch from Kerala, we had included Padmanabhapuram Palace from Kanyakumari distict of Tamil Nadu, and finally went for it,” says  Pulama Oinam, Assistant Professor,  School of Architecture. In the month of March, when the semester was gradually moving to its end but covid infections were making a comeback as a second wave, the university administrators and faculty decided to depute the two students from Kerala (C S Gayathri,  Kavya S (Ist year student)) to the site along a third batchmate from Hyderabad (Teja Rakonda). The three students would live stream the tour while the rest of the batch would join virtually and take the visit along with them.

Gayathri, who lives in Kochi, got into touch with a relative living in the neighborhood of Palace and arranged the logistics. Traveling for five hours first to Thiruvananthapuram and then again for couple of hours to her relatives, she met her co-travelers in the evening of March 23, who too did a lot of travel. “We were both excited and nervous. Though I had visited the place as a little child, but actually all of us were strangers to the place and there were a lot of what ifs. Meeting with friends was a counter balance to this nervousness. So, on March 24, when we reached the Padmanabhapuram Palace, being a Monday, it was a public holiday for the monument as per ASI (Archeological Survey of India) rules,” she says like a storyteller. The three-some team used this opportunity to gather folklore and other information from people nearby and acquainted themselves about the timings and other info. 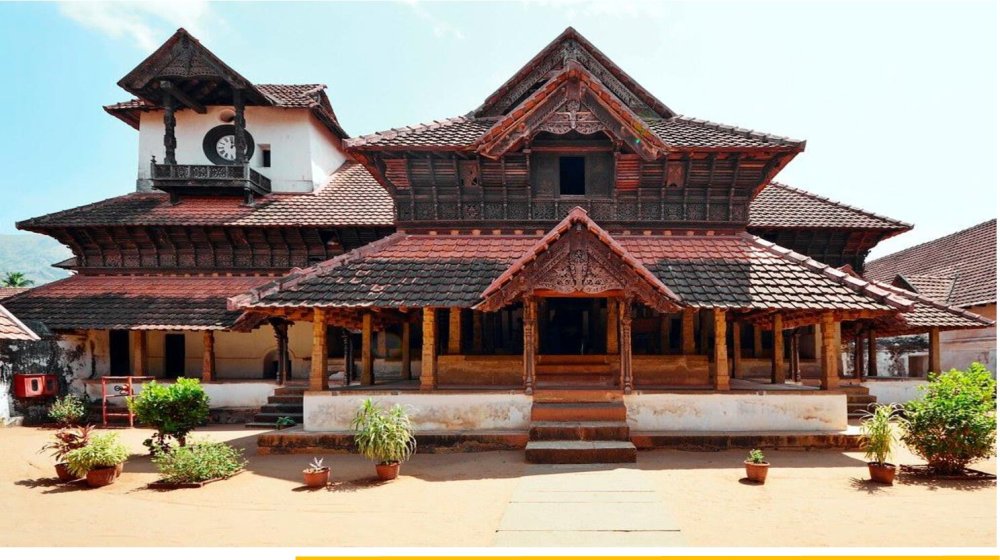 Next morning was the big day for Gayathri and her team. For those who are familiar with Malayalam blockbuster and iconic film Manichithrathazhu, will remember the grandeur of Padmanabhapuram Palace—perhaps the largest wooden palace in the world spread over 6.5 acres and the seat of erstwhile kingdom of Travancore. It was first constructed around 1601 CE by Iravi Varma Kulasekhara Perumal and then rebuilt by   King Anizham Thirunal Marthanda Varma—the founder of modern Travancore followed by others in the line, a total of 14 kings. Nestled in the foothills of Western Ghats, this ancient architectural marvel is a prized heritage of Kerala. Till reorganization of southern states, Padmanabhapuram Palace was in Kerala but it is being still administered by the state (Travancore Devaswom Board ) under a special arrangement with Tamil Nadu. 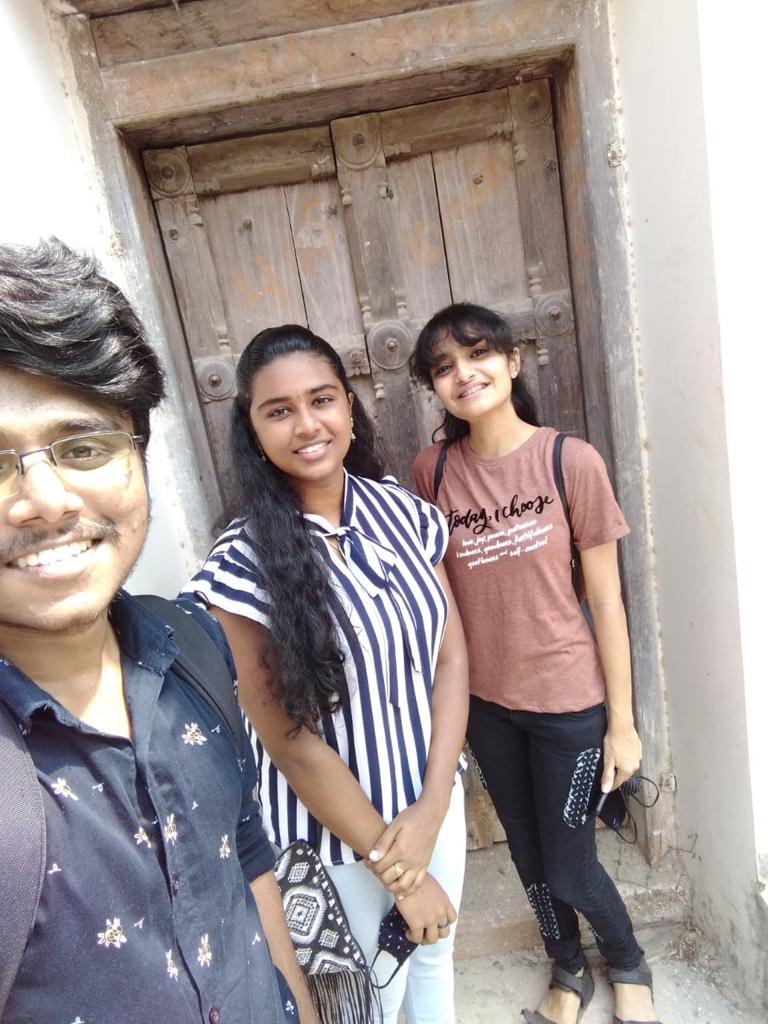 As the three students reached the Palace imagining a beautiful day ahead with their batch mates eagerly waiting to join them, it wasn’t a friendly entry. “As we sought permission to use our smart phones to stream live the tour showing our letters etc, the officials questioned the veracity of letters and won’t allow us. It was only after our teachers and administrators intervened and kept our spirit high that finally the permission came after a series of phone calls to higher ups from local officials got exchanged. It took more than a hour and made us tense. But thanks to our university, things worked well eventually,” adds Gayathri.

The students used only smart phones in the name of technology and through google meet all joined the live streaming which stretches to two sessions of about three hours each. Like the visiting team was busy for approvals and coordination days before the actual visits, the other students on the research part of it. “We started collecting as much information as we could from Internet, YouTube and other sources. We researched on all aspects including history, culture, architecture and others and regularly interacted with our teachers. So, when the live video calls started, we could relate to our findings and it made our interactions more than basic,” says Tarunya Singh.

So actually, what would architecture students of second year get to know from such a famed monument, already well documented and researched? Adaptive redesigning was the theme of the project. A learning project, not to be confused with any actual redesigning work. In layman terms, the students using design tools, architecture, knowledge and other tools had to propose redesigning and offer reasons for it. “An essential part of such study projects is understanding the gaps the current design and then build your case,” adds Pulama Oinam. But this project was still very special. For Tarunya and the rest of the batch, it was more than a challenge as such a complex structure needs not one but several visits to understand it fully. “We had to study and research the culture, history, economy, climatic conditions, transport—everything about it. It was challenging but exciting. But in the end, we all are happy ending doing such a project in our second year itself. It has given us a lot of confidence,” he adds.

With more than 20 build-up structures to cover, the homework or actually days of class work from home went into preparing maps, layout and then working on redesigning premises and final presentations. “We understood the importance of this historical site and its importance and complexity for students so as part of our endeavor to equip them, we arranged sessions with experts–Ajay K Jacob and  Eldo Alias for their understanding and research purposes,” says  Oinam.

The live streaming and interactions on the day were also fun and occasion of some camaraderie both online and offline. The phygital was coming as a reality and sinking in. In projects of these kinds, it was a revelation. “It was too much to capture, we were completely lost in the complexity and difficulty of it, but those side comments and pep talks made a memorable  day for all of us on the spot or those on laptops at home,” says Gayathri.

The class was divided into four groups and each group worked among themselves to come up with a redesigning model of the grand old-palace. Learning with the use of not only core architecture designing and tech skills but the broader principles of real life challenges entailed a lot of paper work, working on design softwares, preparing maps and layout—all contributing to that budding architecture mind that is out to conquer the discipline. Each presentation since has been evaluated by a jury and happily all of them completed their second year. In words of their loved and proactive teacher, Pulama Oinam, “It is equivalent to doing the project as would be done normally and achieving that level using innovative ways has been the best mark of this batch. It is so satisfying for me as a teacher.”

While, the redesign concepts developed by these students may not be of any public interest but the idea of doing more with the existing as highlighted by Gayathri (group) in her final presentation  that included adding a resort, library and adding shows of performing arts as well as compartmentalizing the attraction for category of visitors without tweaking the heritage or its sensitivity, will someday flow to the Government as an innovative way of engaging tourists and might be will be explored in the post-covid world.

“This is just one of the many innovations we did to beat Covid and keep our education on track,” remarks Dr Sanjay Gupta, VC of the university. Design thinking we suppose!