THE 11TH edition of Annual Status of Education Report (ASER) published by Pratham Education Foundation and released on January 18, 2017 throws up no major surprises in its assessment of learning outcomes in schools across rural India for the year 2016 though some welcome marginal improvements in reading and basic arithmetic ability have been seen in primary grades of government schools. ASER 2016 has also noted increase in the enrolment for all age groups (3-16 years) between 2014 and 2016 from 96.7% to 96.9%.  It also acknowledges improvements in the school facilities like toilets and provision of drinking water. Interestingly, the report says that there was no increase in private school enrolment between 2014 and 2016. 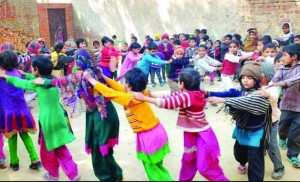 ASER, which began in 2005 as an initiative by Pratham is based on an annual household survey undertaken by it and its NGO partner organizations and volunteers in rural India.  The field survey using standardized formats takes place for two days in each sample village, the first day being for school visit and second day a holiday for household visits.  The data collected is then analyzed and interpreted in the form of a report. The 2016 ASER survey that took place in the month of September 2016 involving 500 local organizations and 25000 volunteers reached 589 rural districts and covered 562305 children (in the age group of 3-16) and 350,232 households in 17473 villages. This is by far the largest and most cited survey in India on learning outcomes in addition to NCERT’s periodic National Achievement Survey (NAS) for grades III, V and VIII.

Among the positives according to ASER 2016 is the increase in reading ability nationally in early grades in government schools. “Nationally, the proportion of children in standard II who are able to read at least std I level text has gone by slightly from 40.2 in 2014 to 42.55 in 2016,” the report says while adding that state-wise picture for std VIII reading level does not show much improvement except in Manipur, Rajasthan, Maharashtra and Tamil Nadu.

In case of arithmetic, the report finds an upward trend for the first time after 2010. The percentage of std III children who could do a 2-digit subtraction has increased to 27.7% from 25.4% in 2014. For standard V the level has remained almost same at 26%. However, the ability to do division among std VIII has continued to drop, a tend observed since 2010.

Similarly, ability to read English has remained unchanged for lower primary grads but shown decline in upper primary grades. “In 2016, of those who can read words (regardless of the grade), roughly 60% could explain the meanings of the words read,” writes the report.

It is also interesting to see that report has found that proportion of children enrolled in private schools has remained unchanged at 30.5% in 2016, as compared to 30.8% in 2014. Significantly the states of Kerala and Gujarat have seen an increase in enrolment in government schools. In Kerala it increased from 40.6% to 49.9% and in case of Gujarat it shot from 79.2% to 86% in the last two years. At the same time out of school children has increased in Madhya Pradesh (from 3.4% to 4.4%), Chhattisgarh (from 2% to 2.8%) and Uttar Pradesh (from 4.9% to 5.3%) in the corresponding period.

In school observations, the ASER survey shows no major change in children’s attendance on the day of visit. Trends over time show that attendance in primary as well as upper primary was higher in 2009 as compared to 2016. At the same time the report found that the proportion of small schools (total enrolment 60 or less)  in government primary sector continues to grow, so has the percentage of multigrade classrooms increased.  It also notes that the proportion of classes in which std IV are sitting with other grades has increased from 49% in 2010 to 58% in 2016.

Notwithstanding the marginal highs and lows as depicted in the report, the latest ASER report conforms to the previous year trends of low quality learning outcomes and a big picture as aptly put out in words by Rukmini Banerji (Chief Executive Officer of Pratham) as ‘something important to be worried about by all of us.” In his foreword to the report,  Madhav Chavan, co founder and President, Pratham Education Foundation  feels that lack of sustained change or improvement suggests that there was neither underlying large scale demand from parents nor motivation of the government to drive change. His hope is that measurements such as ASER can be helpful in understanding the managing the conflict such as pass-fail debate that change the narrative around actual issue.

Delhi’s deputy chief minister, Manish Sisodia who also holds education portfolio and has become a popular education minister in the country for visible qualitative makeover of government schools goes a step further and acknowledges that “90% of establishment (administration) don’t have a dream for education in the country.”  “Mindset of the governance has to change and people must be asking themselves if we have the understanding of education. As a country we need to get over this mindset. Our children, teachers, classrooms and officers have become victims of syllabus and all have lost freedom. We need to see the notion of development is not in flyovers but in proper education of our children,” says Sisodia.

And country’s chief economic advisor, Arvind Subramanian is at loss to see the lack of bottom up pressure from rural India and political economy in vouching for good education. “We have demographic bulge of youth, but this cohort has to have reasonably equipped with education and skills as the world is getting more difficult and dangerous. The premium is on education but somehow we don’t see education become a social engineering force to influence voting,” he adds.  Quite obviously we need to demystify quality education and sell it.