The President of India, Smt Droupadi Murmu, conferred National Awards on 45 teachers from across the country at a function held at Vigyan Bhavan, New Delhi on the occasion of Teachers’ Day (September 5, 2022).

Speaking on the occasion, the President remembered her teachers and said that they not only taught her but also gave her love and inspiration. On the strength of the guidance of her family and teachers, she became the first daughter of her village to attend college. She said that she always feels indebted to her teachers for whatever she has achieved in life.

The President said that science, research and innovation are the basis of development in today’s knowledge economy. The foundation stone for further strengthening India’s position in these areas will be built through school education. She said that, in her view, the development of original talent in science, literature, or the social sciences can be more effective through the mother tongue. It is our mothers who teach us the art of living in our early lives. That is why mother tongue is helpful in developing natural talent. After the mother, the teachers carry forward our education in our lives. If teachers also teach in their mother tongue, then students can develop their talent with ease. That is why in the National Education Policy 2020, emphasise has been laid on the use of Indian languages for school education and higher education.

The President said that it is the responsibility of teachers to generate interest in science and research among their students. Good teachers can make complex principles easy to explain with the help of living examples that exist in nature. She quoted a famous saying about teachers and said “the mediocre teacher tells; the good teacher explains; the superior teacher demonstrates; and the great teacher inspires.” She said that an ideal teacher has all four qualities. Such ideal teachers build a nation in the true sense by building the lives of the students.

The President urged teachers to encourage the habit of asking questions and expressing doubts in the students. She said that by answering more and more questions and solving doubts, their knowledge would also increase. A good teacher is always enthusiastic about learning something new.

On the occasion of Teacher’s day, Prime Minister,  Narendra Modi interacted with the winners of the National Awards to Teachers in New Delhi. Watch Interaction Video here.

Addressing the gathering, the Prime Minister paid homage to Sarvepalli Radhakrishnan and also reminded the teachers that it is all the more important to be felicitated by the current President of India who is also a teacher and has taught in far-flung places of Odisha. “Today, when the country has started fulfilling its colossal dreams of Azadi ka Amrit Mahotsav, Sarvepalli  Radhakrishnan’s efforts in the field of education inspire all of us. On this occasion, I congratulate all the teachers who received the National Award”, the Prime Minister added.

The Prime Minister highlighted the knowledge and dedication of teachers and pointed out that their biggest quality is a positive outlook that enables them to work with students relentlessly for their improvement. “The role of a teacher is to show the light to a person, and it is them who sow the dreams and teach them to turn the dreams into resolve”, he added. State and destiny of India of 2047, the Prime Minister said, is dependent on the students of today and their future is being shaped by the teachers of today, therefore “you are helping the students in shaping their lives and also giving form to the contours of the country”, he said. The Prime Minister said that when a teacher becomes associated with the dreams of the student, he achieves success in getting their respect and affection.

The Prime Minister also underlined the importance of removing conflict and contradictions in the various areas of the lives of the students. He said it is important that there is no conflict in what a student experiences in school, society and at home. He emphasised the need for an integrated approach by the teachers and partners with the families of the students to nurture the students. He also advised against having likes and dislikes for the students and treating every student equally.

The Prime Minister recalled his Independence Day proclamation of ‘Panch Pran’ and suggested that these Panch Prans may be discussed regularly in the schools so that their spirit is clear to the students. These resolutions are being appreciated as a way for the progress of the nation and we need to find a way to communicate them to the children and students, he said. The Prime Minister said, “There should be no student in the entire country who does not have a dream for 2047”. He said that there is a need to recreate the spirit that engulfed the nation during the years between Dandi Yatra and Quit India

On the occasion of Teacher’s Day, 118 teachers of Delhi were honored with the State Teachers Award for their unmatched contribution in the field of education. 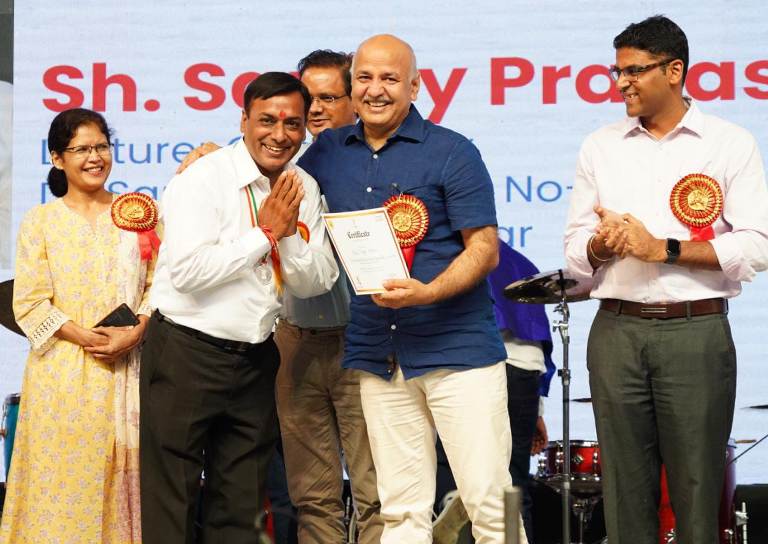 “The pride of education revolution is the future of 44 lakh children in the hands of our teachers, who consider them as their source of inspiration,” Manish Sisodia, Delhi Education Minister.