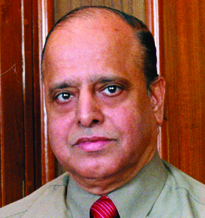 IN A NEW TWIST to the two and half year old formulation process of the  New National Policy on Education, a nine –member committee under the Chairmanship of eminent Scientist and former ISRO chief Dr K. Kasturirangan has been constituted for the preparation of  the final draft of the policy by the MHRD. No timeframe has been announced for this final draft even as union HRD minister Prakash Javadekar has hinted that the new policy is a few months away. The other members of the committee are Dr. Vasudha Kamat, Vice-Chancellor of SNDT University Mumbai. K.J. Alphonse credited with implementation of education reforms in Kerala, Dr. Manjul Bhargava, Professor of Mathematics in Princeton University USA, Dr Ram Shankar Kureel, Vice chancellor of Baba Saheb Ambedkar University of Social Sciences Mhau, Madhya Pradesh,  Dr. T.V.Kattimani ,Vice Chancellor of Tribal University, Amarkantak, Krishna Mohan Tripathy, former Chairperson of Uttar Pradesh High School and Intermediate Examination Board, Dr. Mazhar Asif, Professor of Persian in Guwahati University and Dr. M.K.Shridhar, a former Member Secretary of Karnataka Innovation Council and Karnataka Knowledge Commission.

While the announcement hasn’t invoked any sharp reactions but there are apprehensions that something has been already decided and the new committee is an attempt to provide just a legitimacy to that. At the same time, activists and educationists are still making attempts to reach out to the new committee with their inputs.

Prof Krishna Kumar, former director NCERT and a former DU professor of education has recommended constitution of state level advisory committees on lines of CABE and recovery of institutions like SCERT and NCPCR/SCPCR, DIETS, etc. He also wants the list of unfinished tasks from earlier policy and commissions to be considered. “We shouldn’t become very excited about the word National at the expense of state level policy requirements. He also suggested that ideology is no not a good guide if teaching is to be made professional,” he added while speaking on a panel discussion.

Dr Poonam Batra, again an eminent educationist and professor of education at DU said the trajectory of the policy has been more or less already there and don’t expect too much  change. “Diluting RTE Act is one of the agenda and there is a fear that disconnect of education with society will deepen. We should be worried about teachers as we are being trapped in a new liberal order,” she said.   According to Prof Vinay Kanth of Patna University there is a need to understand that the right to education as a fundamental right goes beyond the right to school or primary education and applies to education in a broader sense. “Imposing one kind of structural reform all over the country may not be worthwhile because of varying the states level needs.”

Prof Anita Rampal while citing the Delhi government’s interventions in school education where it divided students in a class on basis of performance and introduced alternate course for them and encouraged students to go for open schooling in class IX, questioned the policy impact when laws and polices are being  violated in a bizarre fashion. She recommended setting up of learning indicators as against standardization and narrowing the concept to quality to outcomes.

As per the union ministry of HRD, |”In an exhaustive democratic exercise carried for last 30 months the HRD ministry has received thousands of suggestions from, educationists, teachers, experts, students and other stakeholders from across the country. Consultations were held at Tehsil, district and state level. Regional conferences were organized where state governments have given their detailed opinion. Rajya Sabha debated the issues and a special education dialogue was organized in which 48 MPs from all parties participated. Many MPs have given their views in writing. On MyGov platform 26, 000 people gave their views online. TSR Subramaniam committee has given its detailed input. All these suggestions and inputs will be considered by the committee.”