To be spread over a campus of 200 acres, the first university among a host of HEI providers to be present in new Andhra Pradesh capital city, Amaravati, in coming years, SRM AP will admit 10,000 students in its first phase to be followed by another 35000 as the university becomes fully functional to capacity in next 5-10 years 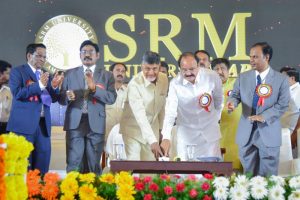 With about 3 lakh sq feet built up area and the first batch of just over 300 students, the under construction SRM University AP in Amaravati’s Neerukonda village, on July 15 witnessed the historic commencement moment of forward journey.  Andhra Pradesh Chief Minister, N Chandra Babu Naidu was greeted with hooting cheers by hundreds of school children and youth as he stepped in the specially made make-shift hall. The presence of Union minister, M Venkaih Naidu (who has now resigned as he became NDA VP candidate) and a host of ministers, MLAs, bureaucrats, educationists and farmers groups, made the occasion look like a political rally of sorts. And it was befitting to the occasion as the chief minister who as the chief visionary and architect of the new Andhra capital has pulled all the stops to woo and bring various universities, was himself excited about his dream taking she rudimentary shape.

“I am sure within a span of five years, SRM University with 10,000 students would be a top ranked world class university, with multi stream research in the fields of engineering to management, liberal arts & humanities to law, medicine to health sciences to make Amaravati recognized by foreign countries as the best educational hub of the globe”, said Naidu while announcing another 100 acres for the university to build a medical college and hospital. Inauguration of SRM University is the first step in the process of making Andhra Pradesh a knowledge hub. Next month in August VIT University campus will be opened in the upcoming city.

Speaking on the occasion, T R Pachamuthu, founder and chancellor of SRM University, announced that the SRM group would offer free education to 13 girl students, one from each district of the State, who hail from poor or agriculture family. Apart from this, he also offered `5,000 scholarship for 100 students in the State who excel in sports. He said SRM will adopt all the villages in capital region and offer free medical services through medical camps and SRM hospital which would be ready in the next phase. “We are investing Rs 3,024 crore to offer best courses in the Amaravati campus. Our infrastructure is going to be just as in in foreign universities like MIT, Stanford etc. In future, the students need not go abroad in search of better education, they can opt for SRM. SRM is embracing a new method of learning, which is not seen in India,” he added. SRM has partnered with UC Berkley College of Engineering, California, U.S., to enable bi-directional information exchange in the areas of engineering education. SRM will also be a global partner of the Jacob’s Institute for Design engineering and the Sutardja Centre for

Entrepreneurship and Technology (SCET). This partnership would establish centers of design, innovation and entrepreneurship at SRM, which would embrace the study and practice of “technology-centric” innovation bringing together technical depth, design methodology, and a focus on societal impact. SRM students and faculty will be provided the opportunity to travel to UC Berkeley to imbibe these ideas.Every year, 20 undergraduate students will be given the opportunity to go to UC Berkeley for a semester to study engineering at Berkeley with a defined set of concurrent enrollment and bootcamp courses.

SRM group would offer free education to 13 girl students, one from each district of the State, who hail from poor or agriculture family. Apart from this, he also offered `5,000 scholarship for 100 students in the State who excel in sports. SRM will adopt all the villages in capital region and offer free medical services in next phase.