Multi-ethnic group of young students sharing and having fun at a university campus.

Are you getting sticker shocked just looking at college prices in the USA and the UK? You might want to consider studying abroad in Canada instead. The country has nearly doubled its popularity among international students within a decade. Here are five good reasons to head north. 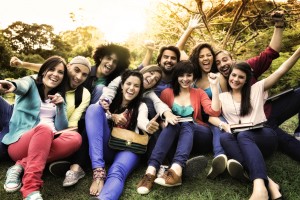 Canada is safe and welcoming

The USA’s northern neighbor has long been a forerunner of embracing multicultural values. In 1971 Canada became the first country to make diversity an official value as it established the Multiculturalism Policy of Canada, affirming the rights of all citizens regardless of race, ethnic origin, language or religion. The country has also been in the news a lot recently as Prime Minister Justin Trudeau has repeatedly welcomed refugees from war-torn areas to join the Canadian society. Canada is not a shabby place to be either: the United Nations consistently ranks it as one of the world’s best countries to live. Local residents, including international students, are protected by several freedoms and the crime rate overall is low in this stable society.

Canada is one of the world’s biggest education spenders: it’s within the top three out of all OECD countries. This emphasis on education and funding university researchers has lead to spectacular success, as Canadian universities always rank among the top in the world. During the 2016-2017 academic year, 26 Canadian institutions were included in the annual Times Higher Education magazine’s World University Rankings.

Canadian schools are particularly advanced when it comes to computer and information technology, aerospace engineering and biotechnology. This is not a new development either: with its innovative SchoolNet program, Canada was the world’s first country to connect its schools and libraries to the Internet in the 1990s.

Altogether there are 92 universities and 175 community colleges in Canada, offering more than 10,000 different undergraduate and graduate programs. Some of the most renowned schools include the University of Toronto, University of British Columbia, McGill University, University of Alberta, University of Montreal and McMaster University.

If you are not excited about having to endure the subzero winter temperatures of Canada, you are in luck: you can even get a quality Canadian education in the heat of Dubai. The Canadian University Dubai follows the Canadian curriculum and offers its students the option to transfer to any of its Canadian partner schools after their second year. As the university has Canadian accreditation, it’s easy to transfer your credits onward from CUD.

According to the market intelligence resource ICEF Monitor, the number of people studying abroad in Canada rose by a whopping 92 percent between 2008 and 2015. This increase in new arrivals is particularly evident in the big universities that now have very diverse student bodies. Out of the students at the University of Toronto, 25 percent come from foreign lands. The situation is the same in the University of British Columbia and the University of Montreal.

Indian students are likely to feel particularly at home in Canada’s universities, as around 14 percent of the country’s international students come from India. The Indian community is also one of the fastest growing segments of Canadian society.

There are decent scholarship opportunities

While Canadian scholarship opportunities are best at the PhD level, there are certainly some options for undergrad funding as well. Canada has a government website which enables international students to check which awards are available for them based on their home country. There’s also the Canadian Commonwealth Scholarship Programme: it offers $10,000 to foreign students studying in public Canadian institutions. Some individual universities also have their own programs. For example, Concordia University offers 193 scholarships to international undergraduate students.

There is a path to permanent residency

Unlike the US, which makes it fairly hard for international students to stay in the country after finishing their studies, Canada actually strives to keep foreign graduates on its soil. This makes studying in Canada all the more appealing for many students.

Upon graduation and even before receiving any job offers, international students can apply for a Post-Graduation Work Permit. This allows them to work in the country for up to three years. The Canadian government has also recently introduced immigration policies that benefit Indian students in particular – the country is currently loosening the requirements for permanent residency for highly skilled students who have graduated from a Canadian university.

At the end of 2016, Canada’s government changed its electronic immigration system, Express Entry, to make it easier for international students to become citizens. There is also a rule pending in the senate that would let foreign students count half of their Canadian study years towards their citizenship application’s required period of residency.

About the Writer: Mirva Lempiäinen is a US-educated freelance journalist from Finland. After calling New York City home for about a decade, she now resides on the French-Caribbean island of Guadeloupe. She is a frequent contributor to SchoolApply.com.