Home Juvenile Behavior What is Turning Juveniles to Heinous Crime?

“What makes the teens (adolescents) commit heinous crimes such as rape?” The answer to this question is highly complex. Mental health studies indicate that currently adolescents are low on resilience, grit, hope, tolerance, and high on aggression, conflict, mood modification etc.

Overall, in the past decade, data from National Crime Records Bureau (NCRB, 2015) highlighted that India has seen a steady increase in the number of cases registered against juveniles. 73.7% of these juveniles in conflict with the law were in the age range of 16 -18 years (NCRB, 2016).  Why is it so? Let’s try to figure out. 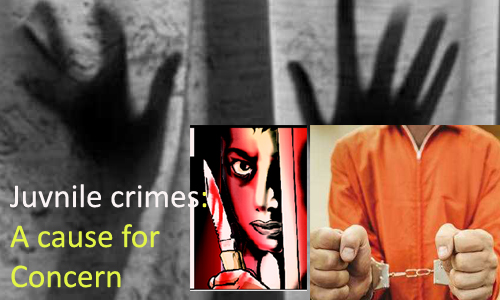 Science suggests that juvenile delinquency occurs due to the interaction of various so called ‘risk factors’ at the personal, family, peer and community level. Thus, no child is a ‘born’ criminal or rapist. About 97% of a child’s personality consists of values, attitudes and morals formed by age of 7 years-all which is influenced by parents, peers and neighborhood. A child primarily interacts with family, school and neighborhood during personality development.

Child rearing practices are being influenced by the current changing family structures in India, moving from joint family to nuclear family and single-earner family to dual-career family. Research studies have documented that children who have received poor parenting, lack of affection, poor supervision, maltreatment and abuse (physical, emotional, sexual) in childhood are more likely to display criminal behavior and turn into juveniles. The Indian traditional joint family system helped to establish acceptable child behavior. However, today with both parents working, there is less quality time spent by primary caregiver which is putting children in the “risk” zone. Children who witness domestic violence and gender discrimination at home at an early age can lead to the ‘intergenerational’ passing on of lack of respect and even violence against the opposite gender which is regarded as acceptable. An analysis of the family background of juveniles arrested in 2016 shows that 38,061 or 86% of the 44,171 minors apprehended lived with their parents, while another 4,550 (10.3%) lived with guardians. The statistics too indicates that family environment plays a crucial role.

Apart from changes at home, there is a significant change in nature of play activities that children are engaging in today. We are raising generations of children who grow up in front of television and use tablets, mobiles etc. This is becoming more important than allowing children to play in parks, read books or involving them in hobbies at home. Playing in parks ensurs that child learns the values of negotiation, sharing, caring, accommodating other person’s point of view, creativity, problem solving skills, decision-making etc that are slowly fading today. The traditional way of engaging children until age of 3 years at home was to give them wheat dough (for making roti), pulses to sort (mix of rajma and kabuli chana) or vegetables to sort, shelling peas, skinning boiled potatoes has now been repackaged to playing games on screen that is hindering the growth of fine motor skills. This impairment in growth can be easily observed in the diminishing writing skills among adolescents.

Experts have also opined that children whose parents do not spend at least two hours with them are less likely to develop emotional regulation and self-control. A recently concluded positive mental health research study in North India indicated that adolescents’ who were able to express their opinion and thoughts in front of parents and other family members, who perceived presence of relaxed environment in family, amicable relationships among family members, were satisfied with their physical appearance, satisfied with dressing style and perceived presence of environment for facilitating character strengths were emotionally, psychologically and socially healthy. Parent-child relationship, shared family activities and positive parent role modeling enhanced adolescent mental health and development.

Interaction with peers in school enhances social communication skill of children. However, there is always a fear of the child being in the company of other deviant children thus, making child monitoring important. Bullying in school has its effect on both the victim and the bully. These children are observed to develop non-acceptable behavior to either protect themselves or to feel accepted by other children. In addition, rejection from peers and teachers at schools can act as a major blow to the self-esteem of a child and resilience to deal with life problems. In an effort to ‘fit in’ and compensate for the lack of self-confidence and anxiety, adolescents’ may fall into the trap of deviant behavior and ultimately get caught up in the vicious cycle of crime. The competitiveness in schools has increased many fold leading to lack of focus on life excellence.

A research study conducted on North Indian ‘school going’ and ‘school dropout’ adolescents indicated that  as compared to ‘school going’ adolescents, ‘school dropouts’ had lower psychosocial functioning indicating that they were more depressed, displayed violent behavior, had conduct problems and showed a lack of emotional control and impulsivity. Early exposure to impoverished environment and petty crimes such as thefts, gambling, alcoholism, violence etc creates a conducive atmosphere for children to consider violence as acceptable behavior.

The factors that put children at risk for turning into juveniles can be turned around to serve as ‘protective factors’. Therefore, there is an immediate need for a transformation in the social environment that should commence with parenting at home, child monitoring system, and instilling the right values of what is acceptable and not acceptable at parental level. However, role of the school cannot be undermined.