With the start of a new academic session in universities, it is also a season for election of student bodies.  A few of these elections are significant and keenly watched for national ramifications.  Considering that Lok Sabha (Parliament) elections are due in second quarter of 2019, next year, the outcome of these elections fought majorly by  student affiliates of political parties, in a way captures the electorate mood. Some observers saw the mood and campaigns in these elections as the forerunner of the 2019 Lok Sabha poll. 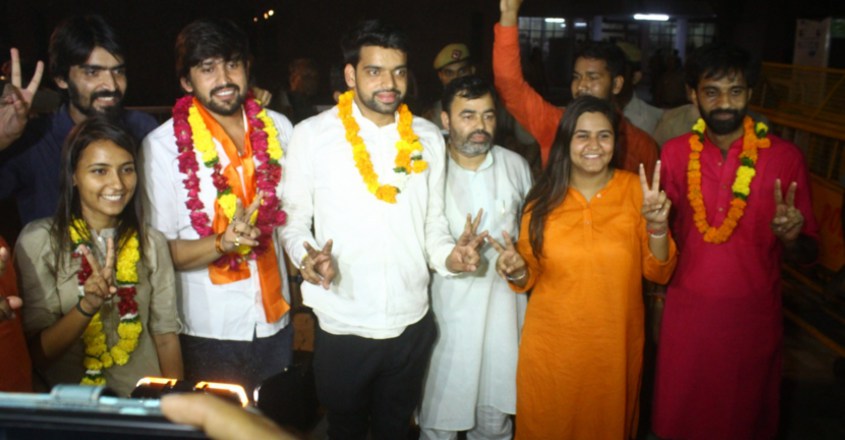 The months of September-October saw keenly anticipated student union elections in Delhi—DUSU (Delhi University Students Union) and JNUSU (Jawaharlal Nehru University Students Union)—and the contrasting results of the two were also reflective of the polarized campus politics at these two highly ranked central universities in the national capital.  Two more student union elections , again in central universities of political significance—University of Hyderabad  and Allahabad University  confirmed the trend. The notoriety that Allahabad University has earned over the years spilled over these elections yet again after violence erupted in the hostel rooms following the declaration of results on October  6.

ABVP’s Ankiv Basoya won the presidential post with a margin of 1744 votes while party’s candidate Shakti Singh was declared as the vice president after he won with a margin of 7673 votes. The Aam Aadmi Party’s (AAP) student wing, the Chhatra Yuva Sangharsh Samiti (CYSS), and left-wing students’ outfit All India Students Association (AISA) who jointly contesting these polls drew a blank.

DUSU election became controversial on the counting day itself after some EVMs malfunctioned and NSUI and AAP alleged rigging of EVMs by ruling BJP government.  The counting was suspended for several hours. However, in a bigger controversy that broke following the declaration of results was the charge leveled by NSUI against the newly elected president, Ankiv Basoya of submitting fake certificates for admission at DU. ABVP, however, countered the claims, saying:  “Delhi University gave admission to Basoya after due verification of his documents.” Now the university has decided to scrutinize the documents.

JNUSU elections, which have always high drama, deep ideological debates and festivities too had its share of controversies, claims and counter claims. ABVP, which is now the largest student political outfit in India claimed moral victory in its defeat as it consolidated a sizeable vote share in ‘the last frontier’ that is JNU. Here also controversy broke after ABVP created ruckus on the counting day saying the counting was started in absence of its agent. Then after winning, the left groups allegedly in guise of a peace march against ABVP actually provoked its gangs into  thrashing some of the ABVP supporters  in hostels and elsewhere as these went into ‘combing’ the campus.

Ever since the February 9, 2016 infamous incident happened in JNU, where the then JNUSU president Kanhaiya Kumar and close associates were charged with sedition charges, there are concerted attempts  to take on deep entrenched left ideology in JNU as it is deemed as the last bastion of left politics. While a consecutive win for left in JNUSU election this year  has only bolstered left presence in the campus, and even propelled the troika of  Kanhaiya Kumar, Umar Khalid and Shehla Rashid as the next generation  political leaders nationally, BJPs high decibel rhetoric may prove counterproductive for it.

Nevertheless, as journalist  Shreejay Sinha put it in the Firstpost.com (Sep 22), “ABVP, through its years of activism, has grown into a largest single organisation on campus. Let’s face it. On a one-on-one basis, ABVP outnumbers every other organisation electorally. It’s this fear of electoral annihilation at the hands of an ascendant ABVP that forced at least four organisations (AISA, SFI, AISF, DSF) to forge an opportunistic alliance called Left Unity in the first place.  Subsequently, the post-poll violence was aimed at striking fear into the heart of ABVP and demobilise it psychologically as well as politically… JNU is the last refuge for the Left and a final frontier for ABVP. The battle is going to be intense.”

However, the good showing by ABVP in University of Hyderabad came as total surprise. AMVP swept the student union after a gap of eight long years on October 6. Aarti Nagpal, a PhD Psychology student grabbed the post of UoH SU president and thereby became in power last time in 2009-10, swept all five key posts of UoH SU. The election results also saw for the second time in university’s history, a woman become the President of Students Union, after 2013. The posts of Vice President, General Secretary, Joint Secretary, Sports Secretary and Cultural Secretary were grabbed by Amit Kumar, Dheeraj Sangoji, Praveen Chouhan, Aravind S Kumar and Nikhil Raj K.

In case of Allahabad University (AU), the Samajwadi Party’s student wing Samajwadi Chhatra Sabha (SCS) and the National Students’ Union of India (NSUI) shared two posts each while as ABVP suffered a jolt and just retained the post of general secretary of the student union. Uday Prakash Yadav of SCS was elected president while as Akhlesh Yadav of NSUI became vice president. Shivam Singh of ABVP is the AUSU general secretary. Joint secretary posts have been won by SCS and NSUI. 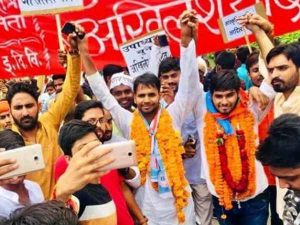 But not unexpected, soon after the declaration of results on October 6, the hostel room of newly elected president was set on fire and arson and violence broke out  in which a number of furniture items, documents, cloths and other things were gutted. A case has been filed against the newly-appointed president of Allahabad University’s student union, Uday Prakash Yadav, for his alleged involvement in the violence that took place on the day results of the student union elections were declared. Prior to this about 20 students including from ABVP were booked for the same rioting.

The student unions from being purely as student welfare bodies were politicized especially after Emergency and Mandal Commission implementation. Lyngdoh committee did try to cut to size the growing monster by its recommendations, but the ideological battles on campuses have only intensified as in the general polity.

With a youth population of about 65% youth, campuses should continue to be the places of student politics and activism but not breeding grounds for hate, divisive or separatist politics.