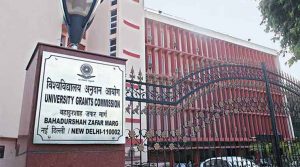 In all probability it will be curtains for the University Grants Commission (UGC), which was established through the UGC Act of 1956 on the pattern of the British University Committee, UK (repealed in 1989) and is currently the de facto apex regulator of higher education in India after the union government approving a draft legislation for its repeal and replacement by another body christened as Higher Education Commission of India (HECI).

After cabinet approval, the draft Act for Higher Education Commission of India (repeal of UGC Act) 2018, was put in public domain for suggestions on June 28 on MHRD website. By the close of date of suggestion making, July 20, about 10,000 suggestions and comments were received. Some of these  may be incorporated in the draft act, and thereafter the revised draft will go for cabinet approval again before the final bill is introduced in the Parliament.

Beginning early this year, the government finally woke up to the issue of regulations of the higher education and started reform process like reform of NAAC, regulation for grant of graded autonomy to universities, granting of autonomous status to colleges, the regulation for Open Distance Learning and  regulation for online degrees. According to the government, the present draft Act is part of this reform process aimed at reforming the regulatory systems that provide for more autonomy and facilitate holistic growth of the higher education through five principles—Less Government and more Governance, Separation of grant functions, End of inspection raj,  Focus on academic quality, and Powers to enforce.

And expectedly, the draft Act has come under heavy criticism from several quarters including  former union minister and  erstwhile BJP leader Yashwant Sinha,  Delhi University Teacher Association (DUTA), states like Tamil Nadu and Puducherry, educationists and experts for being heavily tilted towards government and bureaucrats and therefore greater interference. “This is a bill which promises autonomy but gives the universities and HECI only the freedom to obey the diktat of the government of the day. It is a poor if not cruel joke played in the name of the reform,” says Prof Appoorvananad, DU professor, columnist and a vocal critic of BJP.

“There seems to be an attempt to corporatise education sector by focusing on homogeneous, one-size-fits-all administrative models and best practices rather than allowing institutions to evolve them over time, based on their specific needs,” DUTA said in a statement adding that even as the government had to shelve proposal of creating HEERA because of opposition received, dismantling of the UGC to create a new agency looks like a quick desperate step in the same direction.

However, the Association of Indian Universities (AIU) with about 720 members doesn’t feel there is need of going into a further study into functioning and drawbacks of UGC. “The GER in higher education has grown by over 200% in last five years, the diversity of courses, teaching processes and the complexities and challenges thrown by technological change has made work of universities and institutions challenging. It is being felt by UGC as well but due to its own way of working and rigid rules, a lot of people felt UGC needs to be recasted. What has added to the problem is that UGC has been burdened too much over the years with all sorts of new work. And, reforming UGC itself is an option but in its old garb, the acceptability of change may become a challenge. So, replacing it by another body makes sense. Eventually, whether UGC does it, MHRD does it or any other agency does it, for us as universities, the only concern is that we must get an efficient (speedier decision making), transparent, responsive and enabling regulatory framework to operate, serve and grow,” says Prof Sandeep Sancheti, the newly elected president of AIU, who is also the vice chancellor of SRM Institute of Science & Technology, Chennai.

Draft Act for Higher Education Commission of India (repeal of UGC Act) 2018 has proposed that HECI will have a chairperson, a vice-chairperson and 12 members (3 secretaries from ministries of Higher Education, Skill Development and Entrepreneurship and Department of Science and Technology, AICTE and NCTE chairpersons, two Chairpersons of the Executive Council/Governing Body of accreditation bodies, two serving VCs, two serving professors and a doyen of industry). Thus there are five independent members and nine are ex- officio members. “It is heavily tilted towards ex-officio members leaving very little space for independent views It sounds like council rather than commission as other commission like election commission, Information Commission and so on, “ feels Prof  G D Sharma, a former secretary of UGC.

Sharma also questions how HECI could specify learning outcomes and curriculum development when it is respectively a function of national qualification framework and university itself. Also, if NIRF is there how can the new body evaluate the yearly academic performance?

Writing on News18.com, former UGC member, CIC and interlocutor on Kashmir, MM Ansari says “It seems unlikely that separation of roles of funding and quality assurance will improve the management of HEIs to raise them to global standards…the proposed HECI Act is merely to justify the illegal administrative actions taken by the government u/s 20(1) of UGC act.” According to him neither UGC was provided necessary funds for equitable distribution among central universities nor has the MHRD itself done the needful to avoid such pitfalls in governance as to compel the VCs to seek intervention the President of India for obtaining funds for university development. Against the UGC’s actual expenditure of Rs 8,906 crore in 2014-15, the corresponding allocation for 2017-18 was Rs 4,692 crore, which indicate substantial reduction in funding of higher education institutions through UGC. This has deprived the institutions of reasonable amount of funds for teaching, research and innovation. Also, available funds under RUSA have not been utilised for the purpose for which budgetary allocation was made.

Setting up of HECI is the fourth attempt to restructure and reform higher education sector regulator in the last 12 years which began with the National Knowledge Commission (NKC, 2005-2013) recommending an overarching Independent Regulatory Authority for Higher Education (IRAHE) in 2006. The then UPA government without accepting the recommendation constituted Yash Pal committee to examine the issue further. The committee submitted a report on “Renovation and Rejuvenation of Higher Education in India” to the Ministry of Human Resource Development on June 24, 2009 and that  became basis for the National Commission for Higher Education & Research (NCHER) Bill, 2011, which was eventually withdrawn by Modi government soon after it came to power in 2014 .

His government set up another committee in 2015, this time under the chairmanship of another former UGC chairman Prof Hari Gautam to review functioning of UGC. Professor Hari Gautam committee on basis of its report suggested setting up of a National Higher Education Authority through an Act of Parliament.  But again, no call was taken on the recommendation. Last year, Higher Education Empowerment Regulation Agency (HEERA) was proposed to replace UGC and All India Council of Technical Education (AICTE), but the move failed to take off yet again due to stiff opposition.

In light of so many suggestions and opposition, the debate on HECI bill is definitely going to be stormy when its final version comes out. Will it again be an aborted attempt or just a bill in the Parliament, which like past important bills will lapse as this Parliament gets dissolved in less than a year’s time from now, are questions that will be best answered only by time.  – Autar Nehru