Home Education Editorial What does the New Team of ministers at the Ministry of Education tell us about India’s education reading?

The Bharatiya Janta Party (BJP) and its ideological mentor, RSS, have been very clear in their minds about importance of education and its role in shaping of the society. However, unlike in NDA I under AB Vajpayee when the Ministry of Education (then HRD) was given to a heavyweight, Murli Manohar Joshi, in 2014, the BJP experimented with a novice ‘short-tempered’ Smriti Irani. Obviously she didn’t last long, but again for rest of the term in Prakash Javadekar, the party again shied away from putting a heavyweight in charge of the ministry.

In Modi 2.0 in 2019, the ministry was given to Ramesh Pokhriyal ‘Nishank’.  Again his credentials to head MoE weren’t great or in sync with changing landscape of education. And now in the latest reshuffle of the union cabinet on July 7, four ministers have been entrusted with the job of handling the ministry. What is the thought behind the current composition and strengthen is still anybody’s guess, but the signals it sends out are that the work in the ministry is being closely scrutinized and division of labor has come up as a necessity.

In the hindsight, the matrix of ideological push and need of modern governance and understanding, seem to have found some equilibrium. Probably NEP 2020 has done that needful and the ministry has been freed from clutches of wanted change.

Skill development has been one of Prime Minister Modi’s personal favorites and it won’t be wrong to say he is one of the best motivators and brand ambassadors for restoring primacy to skills in India. During his chief ministerial years in Gujarat, he developed a lot of affinity for skills. 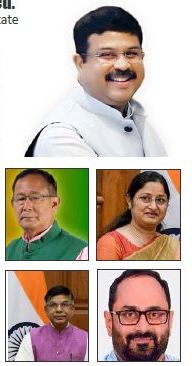 Now the next logic question is about choice of Dharmendra Pradhan as the new Education Minister and importantly also as the new union skills minister. The synergy and interlinking of the two ministries with a common boss is indeed a bold experiment and may lay basis for an integrated policy approach. If lines between skill education and mainstream education are blurred and two diffuse, it will be a welcome change and make skills socially more acceptable. In terms of productivity, it will be like best of the two worlds. Having said that, it is still a long way to go and with the kind of tech disruptions and new business models, even setting goals would be outdated.

Pradhan has already a working stint as the junior skills minister and therefore is quite familiar with skilling system, he has also a youth leader and therefore has a natural connect with the youth issues.  In Prof Rajkumar Ranjan Singh, Annpurna Devi and Dr Subhas Sarkar as junior ministers, he has got enough hands to keep a microscopic look at all segments of education, which looks a better order. Another advantage Pradhan may have is his disciplined image and more of party man than an ambitious politician.  So, unlike in times of Kapil Sibal as HRD minister, where MoS Daggubati Purandareswari publicly signaled then secretary for ignoring her, the three junior ministers are likely to get enough work.

Whereas education is not in good health in the country, the current challenges owing to pandemic have added to the worries. So, a clear leadership with vision for achieving national objectives of education, is a hope of every Indian.