Home Announcements Workshop on Industrial Automation at The Neotia University

Sarisa (Bengal)-based The Neotia University has tied up with Technex’17, the annual techno-management festival of Indian Institute of Technology, IIT Varanasi (Banaras Hindu University), to organise a workshop on Industrial Automation in association with Innovians Technologies. The two day workshop, scheduled on 24-25 September, 2016 at The Neotia University, will provide a unique opportunity to engineering students from Eastern India to get IIT Certificates. The winning participants of a national Industrial Automation competition at the end of the workshop will also get a chance to showcase their innovative projects and compete at Technex 2017, the renowned annual techno-management festival of IIT Varanasi in February.

The workshop will focus on one of the most relevant topics related to productivity – namely, Industrial Automation and more specifically – Programmable Logic Controller (PLC) and Supervisory Control and Data Acquisition (SCADA) – the two most used guiding forces behind any automated industrial plant. The main objective of this workshop is to make aspiring engineers acquainted with the concept and knowledge of latest technologies being used to achieve industrial automation. 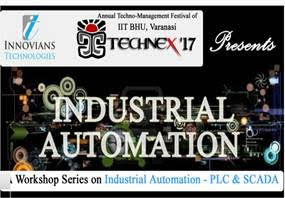 The workshop will be conducted across 3 rounds.