There are 3.38 crore students  enrolled in various programmes at under-graduate and post-graduate level.  Out of these, nearly 85% of the students (2.85 crore) were enrolled in the six major disciplines such as Humanities, Science, Commerce, Engineering & Technology, Medical Science and IT & Computer. The number of students pursuing PhD in 2019-20 is 2.03 lakh against 1.17 lakh in 2014-15.

According to union Education Minister Ramesh Pokhriyal, who released the report,  the continuous focus given by the government under the leadership of Prime Minister Narendra Modi on education of girls, women empowerment and empowerment of socially backward classes are well reflected by the increased participation of women, SCs and STs population in Higher Education as shown by the Report. Minister of State , Sanjay Dhotre said, “The results published in this report are indicators of the success of the policies adopted by Prime Minister Shri Narendra Modi in the higher education sector of the Country. I hope this report will help our policy makers to further improve the higher education scenario of the country.”

In AISHE 2019-20, 993 Universities, 38,102 Colleges and 8,631 Stand-alone Institution have uploaded the form on the portal. However, in addition to the actual response received during AISHE 2019-20, data has been pooled from the AISHE data uploaded during last two years and the final list is :  1043 Universities, 42343 Colleges and 11779 Stand Alone Institutions. Reference date for filling up the Data Capture Formats was 30th September 2019. The number of institutions, teachers and students has been recorded on the basis of their actual number as on 30th September 2019. Information in respect of Examination Result has been collected for the students passed out/awarded degree on or before 30th September 2019 for the previous academic year. Financial Information has been recorded for the previous financial year i.e., 1st April 2018 to 31st March 2019. The survey was launched on 1st January, 2020. Data uploading started from that very first day of its launching and continued till 15th August, 2020. Data was collected on several parameters such as teachers, student enrolment, programmes, examination results, education finance, infrastructure, etc. Indicators of educational development such as Institution Density, Gross Enrolment Ratio, Pupil Teacher Ratio, Gender Parity Index, etc. are calculated from the data collected through AISHE.

In terms of state-share of enrolment, Maharashtra tops in the enrolment of students in Universities (including constituent units) with 9,67,034. This is followed by Tamil Nadu with 9,26,490 students and Delhi with 8,16,110 students. 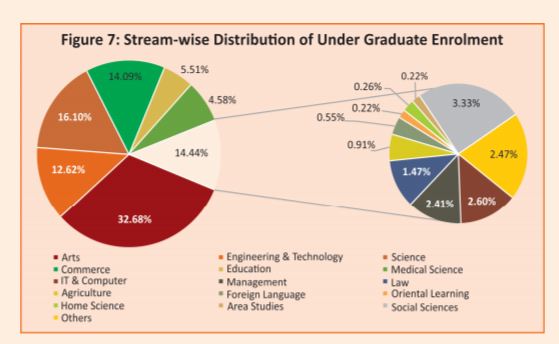