If the vision of Auronya College  coming up in Pondicherry on a land of 15 acres with an investment of over Rs 100 Cr translates into a reality in next a few years, we could well be looking at a ‘future ready’ model of higher education in India. The college has been launched to take on the challenges of the most transformative times in human history arising from the convergence of technological, biological and physical systems in the just started 4th Industrial revolution. In fact, the college has registered a trademark by the name of ‘Education 4.0’ to bring home the notion of diverse interconnected learning and a new paradigm of teaching/learning that is unfolding the unknown future of things. Auronya college, which will be a fully residential learning campus and support immersive and interdisciplinary experience including tours  will offer undergraduate degree programs in six disciplines—design sciences, business & economics, humanities & social sciences, research& intelligence, arts (from performing arts to culinary arts to history and anthropology), and media & communications. The courses will start from next academic session, that is, 2018. However, this year, the college will launch a one-year post graduate diploma in New Age Management & Leadership named Antariksh, a kind of executive MBA for working professionals. The course cost is Rs 15 lakh and will amalgamate elements from all the six schools mentioned above.

Abhay Kumar (Jain)  a hugely successful first generation entrepreneur and a big name in pharma industry who was born and brought up in Tamil Nadu (though his family comes from Rajasthan) and is credited with founding successful companies  like LifeCell International and Shasun Pharmaceuticals is the man behind this ambitious education venture. Kumar first ventured into education in 2004 with setting up of the Sri Shankarlal Sundarbai Shasun Jain College for Women in T Nagar, Chennai. The college started with five students, and today has more than 4000 students and ranks in the top 100 degree colleges in NIRF rankings 2017. “Auronya is built with a foundation of creation and contribution embracing the spirit of liberal education, invention, intelligence, globalization and entrepreneurship,” says Abhaya Kumar, who persuaded his good friend and noted educationist, Dr Indira J Parikh to join him in this new project.

Parikh, a former dean at IIM-A, who has taught at INSTEAD Fontainebleau (France) and at Texas A & M University and was instrumental in setting up of the Flame University, Pune (a liberal arts university) is the founding vice-chairman at Auronya. Known for her strong liking for Indian traditions and values, Parikh sees this as an opportunity of embedding values of nature and civilization into the emerging education order of future. “The generation born in this decade and those yet to be born will be confronting a revolution in technology and as a consequence in the life and living and relationships amongst people. Education and employment will undergo change not available in the history of mankind. In order to meet the unfolding of this New Age Change the country needs to prepare an education which will be real agent for the times and meaningful to the generation of students…the country will also need to prepare leaders who will take the responsibility to shape this change in a most dignifies human manner,” she says.

On the choice of starting a liberal arts and sciences college instead of technical education institutions as is  a ‘norm’ in south India, Jain a chemical engineer by education says that liberal education has taught him to cope with the challenges of life and he developed a fascination for this form of education when he often travelled across in his early career. And why Pudducherry and not Chennai as the college location, Jain indirectly points to less hassles in ‘clearances’ and presence of Auroville in the Puducherry.

Indira Parikh is excited how the unfolding of the college will be a voyage of discovery by the students and how this will be an alternative education system. “Education 4.0 is education of tomorrow. Children know more about facts and technologies but not about values. Unless you have roots, no matter how high you grow, it is always going to be shaky,” she says. “Auronya is going to be about self-reflection, adventure, passion, pride in patriotism and to expand mind,” she adds. 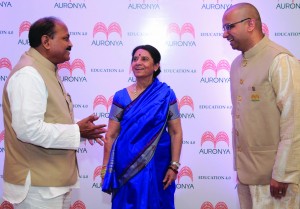 Auronya College including its logo was revealed to the world in Chennai on April 22 at a special launch event attended by a host of educationists, advisors, collaborators’, close friends and governing council members. To be supported with a heady mix of high-end technology directed towards a ‘future centric’ knowledge, the full-bodied curriculum aims to embed timeless values and culture in serene nature setting. Designed by architect B V Doshi (Padmashri awardee), the campus will be state of the art and have amenities like Virtual & Augmented Reality studios, 3D printing facility, think spaces, amphitheater, smart classroom, sports facilities, gymnasium, swimming pool etc. The college encapsulates six schools: School of Design and Sciences; School of Business and Economics; School of Humanities and Social Sciences; School of Research and Intelleigence; School of Arts; and School of Media and Communications.

Anuj Sharma, Founding Dean Auronya, who is a Havard alumnus cites depletion of several elements from the face of earth as challenges that future education has to address coupled with technological imperative for creativity, agility, adoptability and cognitive alignment for human-machine intelligence interface in coming years. “Future shouldn’t catch us by surprise, we must not be seen running away. We need to be the change ourselves and that is how we plan to fuse the human and technology elements at Auronya,” he says adding that Auronya College is committed to expand its learning universe in the coming years for unique Undergraduate, Masters and Post Graduate programs.

By Autar Nehru, who attended the inauguration ceremony in Chennai.