Home Right to Education India’s commitment to its children impassive

Well a child may ask: Where are basic facilities in my school? Where are my teachers? Why my teachers are not able to help me? Will I be failed? To answer these questions, one has to really to evaluate the implementation of Right to Education Act, 2009. And alas, it is a patchy story of ‘failure’. 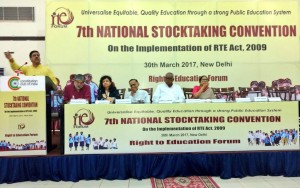 On March 30, RTE Forum, the national coalition of activists and organizations from more than 20 states in its national stocktaking convention (this year it entered into 7th edition) on the implementation of RTE Act yet again painted more or less the same picture that it did last year. The report released at the gathering says India’s 90% schools aren’t RTE compliant. Even among the top 5 performing states, the implementation is in the range of 19-30%. In bottom states it is somewhere between 0.2-2%. Karnataka and Himachal Pradesh have shown negative trends.

The report says that para teachers still constitute about 13% of the teaching workforce and at 18% there are more than 9 lakh teacher vacancies in the country. About 94000 schools are still single teacher schools and in a large number of schools pupil teacher ratio is as high as 60.

Pointing to lack of training for school management committees (SMCs) and a mechanism for ensuring school development plans, the report says there are negligible SMCs in private schools. Again about 40% of schools don’t have a playground and about 33% don’t have boundary walls. A large number of schools don’t have electricity or libraries. In more findings, the report says that CCE is still not seen as a useful change and is resisted by functionaries.

The report also points out that budget allocation has remained stagnant and when analyzed in detail, it has come down in several important heads including teacher training of language teachers. The report has also highlighted the closure of government schools. “More than 4000 schools are in position to close due to policy paralysis or promotion of privatization of education in Rajasthan,” the report says.

According to Ambarish Rai, National Convener, RTE Forum, there is an effort at promoting privatization of education and in some instances government schools have been closed just to make that land available for commercial use. “The inequality in education is increasing. Government schools are for poor and even in private schools (budget schools) what kind of education is there when you hire a teacher for a few thousand rupees. We would welcome any amendment that would strengthen the RTE but would come on streets if it is diluted,” he said adding that education is important for keeping unity in diversity and responsibility of the government and parliament.

Former foreign secretary and president CSD, Prof Muchkund Dubey called for including at least one year of pre-schooling under RTE Act. But it must be ironical for children of India that an legislation as important as RTE Act hasn’t been discussed in parliament for long and coupled with Child Labor Act, the progress is largely not known at least officially.