The much orchestrated show of strength by National Coalition for School Education (NISA) where about one lakh representatives (majorly school owners) from country’s budget private schools (BPS) were expected to join a protest rally in Delhi’s famed Ram Leela ground on April 7, against government high-handedness on account of RTE Act implementation, turned out to be a meek show as far as numbers are concerned. Nevertheless, the rally which was eventually attended by a few hundred delegates, did register the protest of these schools as private school associations from several states extended support to NISA’s ‘Shikhsha Bachao Andolan’ (Save Education Campaign) as the sword of Damocles continues to hang over their heads.

Actually a squall and rain storm on the evening one day before the event spoiled most of the outdoor arrangement that the organizers had put together. A number of plastic chairs were broken as the rallying erected for tents fell on them. By the time, some of the arrangement could have been salvaged or put in place again, the scotching heat of about 42 degrees left no choice for most participants not to join the proceedings. The event had turned into a mela (fair) where food and others squatters did a brisk business. Several delegates were heard complaining for the mess and no care after they had traveled from so far off places. 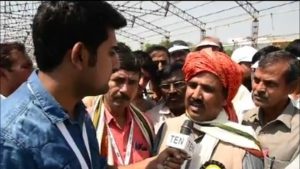 Kulbhushan Sharma, who is the president of NISA used the occasion to advance school voucher program as conceptualized by NISA’s parent organization CCS (Centre for Civil Society). He demanded that each child be given Rs 2500 per month by the government so that s/he goes to school of her choice. “Government must trust parents. Through vouchers, private schools can turn under employment of teachers into a respectable employment and tax payers. Schools would be able to meet salary criteria and turn about two crore tax payers to the country,” he added. He also demanded safety and security of all students, teachers, management and school premises..

NISA claims a membership of 55,400 schools from 20 state, which cater to the needs of 9.35 million children all over the country. And NISA using this number has also started an online petition to the Prime Minister against the RTE provisions that threaten closure of schools on input norms.

The army of about 3 million low cost or affordable budget private schools in India is in itself an economic sub-sector with unique characteristics including achievements and problems. The bulk of these schools is the result of an entrepreneurial zeal triggered by self-employment prospects and successes running these schools have demonstrated. While in some places these schools have genuinely filled the gaps in quality of education and provision of schools, yet in overwhelming cases, these are purely accepted commercial entities. Completion, retention and autonomy have made them academically somewhat superior to neighborhood government at least in public perception and that is a reason for their rapid growth.

But with child-centric Right to Education law, the game is changing. Largely unregulated or soft-regulated thus far, these schools now face a prospect of closure. Therefore, the fear of losing livelihood is bringing them together and the issue is becoming bigger by the day.

There are several issues that have cropped up as there is no dialogue between these schools and government at a collective level.  According to Hemlata Sharma, School Kranti Sangh of Rajasthan, who was the star speaker at the Ram Leela rally, their association has submitted 290 memorandums in last two years to authorities from district administration to PMO, but never got any reply. The non-existence of a policy towards these schools have resulted in heated arguments between schools and district collectors at several places principally on the issue of non-receipt of reimbursement of fee of EWs students admitted in accordance with 12 (c ) of RTE Act, 2009.

Authorities have been threatening those schools who don’t admit fresh students even with snapping of water and power supply. Property tax is another area, so is building maps of these schools. The school owners today are a frightened herd with uncertain future.

So, it will be interesting to see how this large number of ‘entrepreneurs’ keep their own and others jobs intact. Will their intense lobbying both through a bunch of research scholars and vocal chords win over the politicians? Do we see Right to Education Act getting scrapped or voice less children winning a place in our national development goals?