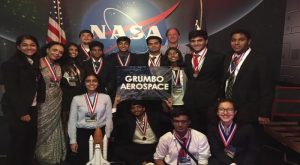 A team of 12 students drawn from Delhi Public School R K Puram’s Aerospace Society club along with five other international teams from USA, UK, Australia, Argentina and Uruguay who together formed ‘Grumbo Aerospace’ company are winners of this year’s International Space Settlement Design Competition, the final of which was held at the NASA Kennedy Space Center in Houston, Texas (USA) over four days (43 hours) between July 27 and July 31. The company presented the winning presentation on ‘a moon surface city’ meant for research into terraforming at a crater on Moon.

Back home, the winner group of students along with advisor Rupa Das is on top of the world as this is the first time that DPS R K Puram has won this prestigious international competition even though the school teams have been competing for it for the past 12 years. Sharing their experience at the final, the team members recounted the grueling sessions of working for the presentation with excitement. “We worked practically 43 hours nonstop and with international team members in our company and it was a lifetime experience as apart from design and civil engineering sciences, business development, automation etc we had to deal with cultural differences. It was a great learning,” the members say.

The contest which was created by co-founders Anita Gale, Dick Edwards, and Rob Kolstad in 1984 for high school students in USA, was expanded to India in 2007. This contest puts high school students in the shoes of aerospace industry engineers designing a city in space that will be a home for over 10,000 people. Student engineers demonstrate creativity, technical competence, management skills, space environment knowledge, teamwork, and presentation techniques to conquer the problems inherent in sitting and designing a Space Settlement (aka Space Colony).

Each year the Competition organizers develop a new design scenario with its own special requirements. Contest teams work together to create a 40-page report that addresses the issues and communicates their ideas and designs.

“We planned a city for 20,000 people and it had all the amenities and necessary resources to sustain itself,” says a team member. On being asked if it is pure sci fin kind of presentations at the competition, the winners felt agitated saying that all that is presented is scientific and there is a possibility that in two decades from now, a space settlement might be a reality. “We are very much convinced that this will happen,” they added.

During the competition, they got a chance to attend technical sessions by NASA and Boeing engineers involved in known Space missions—the Space Shuttle and Apollo programs.

The teams are divided into 4-5 departments from structural engineering to resource regeneration and they have to prepare a presentation on all aspects of a space colony. This competition takes place in a simulated future. Technological advancements beyond the current state of the art have accrued. Mentors, professionals and real engineers share their knowledge and experience in both engineering and management to these teams and helps them prepare the presentation which is then judged by a jury of experts.

The DPS R K Puram team began the competition in May 2017 online with Indian preliminary round. It was followed up by Indian final at a facility in Manesar (Gurgaon) in November. The team emerged as runners up here. After this were Asian prelim round, again online and its final which was again held at Manesar. DPS R K Puram team beat other teams including from home country, China, and Pakistan and qualified for the international 12 finalists. Before going to USA, the team had met Vice-President N Venkaiah Naidu and Delhi Chief Minister Arvind Kejriwal to seek their blessings.

While the whole experience was joyfully satisfying, one wish that will never get fulfilled for them is that they won’t be able to work at NASA as adults as no foreigner is permitted a job there. Nevertheless, their achievement is a matter of great pride and inspiration!