The global summits held over the critical issues of environment platforms  have reflected more global discord than consensus when it comes to sharing of responsibilities in the whole environmental scenario. The recent example is the announcement of the US President Donald Trump to pull out of the Paris accord which intended to bring all the global nations to combat climate change. In December 2015, nearly every country in the world — 195 in all — agreed to the first global pact aimed at reducing emissions of planet-warming greenhouse gases. It was a landmark diplomatic achievement and the pinnacle of President Barack Obama’s environmental agenda. Scientific studies show that if the world’s carbon emissions continue unchecked, atmospheric temperatures will continue to rise. The planet won’t just be hotter, but it will also suffer from rising sea levels, more powerful storms, droughts that lead to food shortages and other extreme conditions. The idea of the Paris climate accord was that every country, rich and poor, would set goals to curb carbon emissions in an effort to avert the worst effects of climate change.

According to Trump, it hurts the American manufacturing prospects. On this basis, Trump refused to endorse the Paris agreement at G-7 summit in Italy very similar to Kyoto Protocol which was never ratified by US. This puts Paris accord in danger which could be another Kyoto protocol signed in 1997 as the first global pact on climate change but only proved to be a major under-achiever later on. By doing this, US would be the third nation alongside Syria and Nicaragua. It is very much clear that development agenda of any nation is guided by the vested economic interests more than any other factors. Only one time major environmental disasters are able to catch our attention towards the enormity of the problem. The uncertainty and unpredictability are the two significant features in environmental management which need to be addressed with more seriousness and in right perspective. 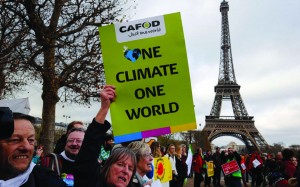 There have been buzz around sustainable development since past two decades but policies and measures show only the different side of the story. According to the World Bank Report, India loses about 80 billion dollar annually which constitutes about 5.7 percent share of the whole GDP due to environmental pollution, domestic waste, erosion of agricultural soil, poor sanitation and hygiene, deforestation and loss of biodiversity. And interestingly, all this is the outcome of aggressive development pursuits. The paradigm of development in our country is following a path that is profoundly based on capitalistic structure of economy. From a clear policy shift towards economic globalization in the 90s, the major focus has been around increasing the GDP growth with environmental concerns falling in the background. The economic priorities have taken over the environmental challenges which are really serious in nature. So it is obvious that there is distortion of balance between ecology and economic interests. The alarming effects on the ecosystem have raised grave concerns pertaining to-

China accounts for 28 percent, US 16 percent and European Union 10 percent for carbon emissions in the global scenario. US pull out would again put onus on China and India with other developing nations to take the Paris pact forward. This also brings the issue of climate justice and equity to the fore. Industrialized and economically developed nations face the biggest responsibility and burden for action to address climate change. They must support developing nations adapt through financing and technology transfer. But that is not the case as the responsible nations are reluctant to indulge in any kind of formal treaty that in anyway harms their economic agenda. Paris accord is a true reflection of this approach. India at the national level has to set its environmental priorities right in consonance with her strengths and challenges.

It is only in the interest of India to address the issues and take stringent measures well in time. India should decrease its dependency on conventional means of energy consumption and move towards non-conventional sources like solar, wind and tidal energies. India is doing that though it requires a more streamlined effort. It needs innovation to explore green technologies and its adaptation to diverse climatic conditions. The application and expansion of green technology is the need of hour. The research and development requires much more impetus on the one hand while conservation of natural resources on the other. For instance, Canadian company General Fusion is planning to establish its first power plant based on fusion energy which does not emit greenhouse gases and it is safer for earth.   Similarly another start-up company of Canada is working on carbon engineering which is planning to prepare fuel from carbon dioxide emitted from environment.

The other major step is taking a policy shift towards green tax progressive in nature. It would be applicable to agencies public and private involved in excessive exploitation of natural resources. The collected money could then be utilized for conservation of our biodiversity. And more certainly we also need to redefine the development perspective. The society has changed from being conservative and traditional towards liberal, utilitarian and materialistic in nature. In this context, the man-environment relationship has evolved over a period of time in which man is dominating over the environment thereby creating a serious ecological imbalance. This takes us to another dimension of socio-behavioral and cultural elements that determine the status of ecosystem at any point of time. In this scenario, it therefore becomes significant to bring socio-behavioral changes towards building a healthy ecosystem that adds much more than tangible accomplishments.

In this respect, measures of economic development in terms of GDP should be supplemented by Green Gross Domestic Product (GGDP) to measure development on environmental parameters. The industries that are saving or protecting environment in anyway should be promoted by providing certain incentives. India having an edge of demographic dividend should harness the potential of vast human resource in such service based industries that are eco-friendly.  The use of bio-toilets, recycling of waste products and pooling of resources should be promoted at the community level. The minimalist approach which was adopted in western countries few years back should now be encouraged in our country as well, where people should follow a lifestyle based on minimum requirements like it is becoming popular in Japan. Overall, the present and future environmental challenges need community sensitization and intervention collaborated with adequate and effective policy initiatives from the state and central governments.