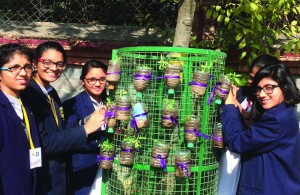 The World Environment Day on June 5 was marked and celebrated in India much like the rest of the world with school children/youth and other groups including local government bodies and environmentalists organizing various customary awareness generation activities, dedications, plantation drives etc.  India on October 2, 2014 has embarked on a cleanliness campaign popular known as Swachh Bharat with the mission of achieving street-smart cleanliness everywhere by October 2, 2019 coinciding with the 150th birth anniversary of Mahatma Gandhi. So, Environment Day had more significance for India.

However, a mid tem review would reveal that this mission is lacking in impact and therefore optimism. While there is indeed a far greater awareness about the need of having a healthy environment and environmental issues like waste management, sanitation, pollution control and climate change have become part of daily news, the connect and intensity of it becoming a national/people mission is still a dream. According to Navin Bhatia, who anchors news capsules on whistleblower news India, the problem or failure of Swachh Bharat lies in not responding to technological and systemic capacity? Quoting a study done by IIT Kanpur for ministry of urban development in 2016, he says that of the 1,43,499 MT of waste generated  daily by more than 9765 urban centres in the country, only 83% is collected leaving about 25000 MT on roads and elsewhere. And only 29% of collected waste is treated or recycled, which leaves a huge volume of waste untreated in landfills,

It is not that models of 100% waste collection and treatment don’t exist. In fact, Prof Krishan Khanna ounder of  iWatch voluntary group in a letter to Prime Minister (a copy of the letter is with this publication) has provided a snap shot of how it is done in countries like Germany and how it can be done successfully here in India. The heavily technological models of processing/ treatment plants and a must good practice of segregation of waste at source are keys to pull the whole system to its holy objective. Unless those investments and corrections are made on a priority basis, awareness generated on the cause can turn to despair and disinterest.

Eco-restoration and livelihoods have to be mutually inclusive. This implies that save whatever virgin lands/ecosystems and forests we have and provide impetus to eco-friendly trade and business. Protecting environments must become part of individual life skills so that we can automate protection and nurturing of trees and conservation of natural resources.

So, it is important to work on a comprehensive strategy that will involve deployment and development of world class technology and processes in waste collection and disposal; improving air quality by curbing suspended particulate material, which has been of late linked with thinning of monsoon clouds; and of course mass participation. And schools and children have been doing their bit year on year. If provided with an enabling and visible action plan, our children would become green producers and consumers in their adult life. And that way a whole generation will carry forward the values of a healthy environment.