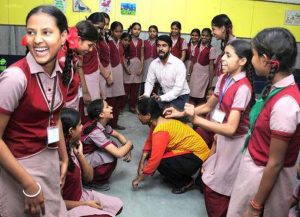 Aam Aadmi Party (AAP) led government in Delhi last month on July 2 rolled out a new pathbreaking education initiative called ‘Happiness Curriculum’ for sensitizing over eight lakh students on universal human values and emotional wellbeing in about 1000 Delhi government schools. Going by the initial and informal assessment, the intervention in the form of a regular ‘happiness class’ for classes nursery to VIII, prepared by State Council of Educational Research Council (SCERT), the equivalent of NCERT at state level, in consultation with five NGOs working in the field of life skills, child psychology and allied spheres, is suggestive of its likely success.

According to highly placed sources within the expert committee which framed this curriculum, teachers have started reporting learning improvements in subjects like Mathematics. “It is too early to conclude any impact, but several teachers are feeling a change,” the source said while clarifying that the impact analysis will be done only after a full academic session next year.

Education has been a major area of focus for the AAP government in Delhi ever since it assumed power in February 2015. In the current fiscal, Delhi government has allocated Rs 13,999.7 cr for education, which is 26 per cent of the total budget and an evidence of education being prioritized. It was under this zeal that the present government in order to improve outcomes in government schools embarked upon several strategies and initiatives including systemic changes. After Chaunnati and Pragati initiatives in 2016, which were aimed at helping slow learners, last year, the teacher development coordinators program and principal cluster meets were started. It was essentially the freewheeling environment and belongingness generated within the system that academicians within the government set up opened up and provided vital research inputs and then became part of the change. Happiness Curriculum launched by Dalai Lama in presence of Delhi Chief Minister Arvind Kejriwal, Deputy CM who is also the education minister and about 18000 teachers on July 2, is the latest addition in this approach towards improving government schools in Delhi.

Even though life skills program through YUVA was available for quite some time within the education establishment of Delhi, constitution of the Cell for Human Values and Transformative Learning (CHVTL) within DIET at Darya Ganj set the ball rolling for a meaningful intervention. Under the chairmanship of a deputy director level officer, a group of principals, vice-principals, SCERT psychologists and others brainstormed to make an innovative intervention that would be targeted at ‘mindset’ change of children so that they start perceiving things from a positive perspective. Subsequently, in February this year, proposals were invited from expert groups for preparing a curriculum that would be transacted in classrooms with impact.

Five NGOs– Dream a Dream, Blue Orb, Circle of Life, Abhibhavak Vidyalaya and Labhya Foundation were chosen among 1500 applicants to work alongside CHVTL committee for preparation of this curriculum. The 50 odd expert group comprising experts from different domains including 30-40 government school teachers were part of this exercise with focus on five major verticals – mindfulness, self-awareness, harmony, critical thinking and emotional intelligence. Under this Happiness Class handbook for teachers have been prepared in four categories Nursery-Kindergarten, Classes 1-2, Classes 3-5 and Classes 6-8. About 18000 teachers are being oriented to facilitate this program which is also regularly being followed and monitored by observers and experts.

“We studied happiness framework and concluded that if it is linked to purpose, then children would be better equipped to shun negative emotions like hatred, anger, jealously etc and other radical influences in life. And if they live the present in a positive mindset, many things of the past  and coming future will be seen by them in a constructive way,” says one expert on condition of anonymity.

The curriculum and happiness class is essentially a full period of about 45 minutes with a structure of discussions and activities. Mindfulness is a form of concentration exercise where the children are told to concentrate on present and sounds around with eyes closed for a couple minutes both to start with and at the close. The syllabus consists of half a page to one page stories or concept notes/scenarios. These are not the usual moral values education stories but situations in real world examples. The teacher introduces it and then children have to respond and get into role play etc. “We have to involve each and every child in the class and for this we can go with a story for a week. As it is not examination based, more and more students speak up their mind and then through peer listening develop a perspective. And as is desired we are making attempt to involve the last child so that the impact is felt across the board, “ says a teacher serving in Delhi government secondary. Delhi government in addition to 1000 secondary and senior secondary schools also owns about 500 Sarvodaya Vidyalas with primary classes. The bulk of primary education government schools in Delhi come under the three municipal corporations.

“Most curriculums are made keeping IQ of about 50% of children in mind, while as the other half is neglected by our education system. We need to look at how best we can engage both teachers and children in a process to make our next generation better human beings. That will address several evils and shortcomings in their lives and society. That is how this new innovation is positioned,” says Shailendra Sharma, Principal Advisor, Directorate of Education, Delhi government. On being asked if the AAP government, which is at loggerheads with private schools, plan any directive to take this offering to private schools in Delhi, he says,” No we have no such plans but anybody is free to implement it.”

With crime graph steadily going up and depression and other mental diseases nearly assuming epidemic proportion, an innovative intervention of such large scale is welcome. It has also tremendous research value and multiplier potential. Therefore, the happiness index that comes after its assessment will be eagerly awaited.  …Autar Nehru