THE TRAVEL to Muni International School from nearest Metro station of national capital, Delhi’s  Dwarka in cramming Mohan Garden area is an ordeal of negotiating unruly and diverse traffic  and men on narrow, encroached and poorly maintained streets. Forget aesthetics of road structure, it is a common site in   ‘unauthorized’ colonies of Delhi numbering in hundreds and  inhabited by a sizeable lower middle class population. The thoughts of ‘why am I here?’ cross your mind repeatedly until you reach the school. Like hundreds such small schools in almost every street of India, the school obviously came up to cater to its neighborhood  people in 2002, and more so as a means of earning livelihood for an undergraduate ex-serviceman, Havaldar Ashok Kumar Thakur of Jat Regiment (from 1984-1992). So, what is the big deal about this school?

All children (714) here converse fluently in English. And all of them come from less or moderately educated families! Wait, that is not all. Every child here has a working knowledge of Japanese language as it is compulsory till class IV. The school is a member school of Japan for promotion of Japanese language in Delhi. In terms of academics, even those at bottom touch more than average as the school has the motto of ‘no child left behind’. It is not complete as yet. Every child is trained in giving cardiopulmonary resuscitation (CPR), acupressure therapy, handling some medical emergencies, and growing herbs.
The ‘wonder’ is so captivating that through word of mouth and excellent presentation skills of Thakur, the school is drawing visitors from India and abroad. According to Thakur even the Delhi government unofficially is sending its school leaders to learn the change.
How was this feat or success achieved, will be a researcher’s delight.  Ashok Thakur, who couldn’t complete his B Com as a student, was nevertheless a favourite student of teachers throughout as he was not only enterprising with persuading traits but was obedient to the core. “I was a back bencher but teachers preferred me for doing odd jobs for them or otherwise,” he recalls sarcastically. After retirement from Army, he joined family business (a shop) of dealing in properties in his area. But soon family found him unworthy of doing anything productive and as a last resort provided me a 250 sq yard land plot to open a school. He did start it with 25-30 students and a couple of teachers from his shop. His school came to be known as ‘dunkan wala school’ (shop school) and for next 5-6 years posted recurring losses. To make up for the loss and avoid borrowing from family, he would go to Dubai from February to July all these years to work as a daily wager in naswar (powdered tobacco) packaging and distribution. 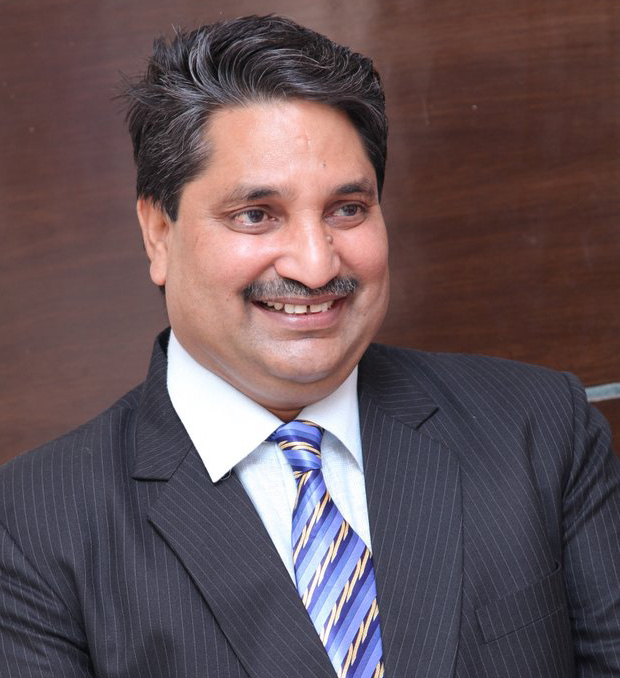 So, Thakur, all the time thought of some intervention that would change the fortune of his school and therefore his own. He began to scrutinize school processes minutely and how his school could make the cut and be different. According to school principal, Seema Sharma, a trained English teacher, who has teamed up with Thakur from the very start, “We decided that all students in the school should speak in English only. And, upfront it was a difficult decision. Neither had we had teachers, nor parents, who could support it. Instead a number of parents protested. But we persisted and in the first few years, children hesitated, made lot of mistakes but we painstakingly corrected them till our first batch of children developed communicating in English as a habit. And thereafter, it comes naturally to children as they join us after some months through peer learning.”  According to Thakur, the school doesn’t prescribe to English text book for small classes. “We don’t have English Book or English period, but our children speak English,” he says.
A similar case with Japanese language, which happened because of the vision Ashok Thakur had for imparting language skills to his students. “I always had the neighborhood population in my mind. Most of them don’t have large enough incomes to support higher education of their children even if their children are academically bright. So, I thought why not to equip these children with something that can make them employable even with secondary education. Japanese is a tough language but with lots of opportunities. Also, their culture is much closer to us. That’s how we got a Japanese teacher into the school,” he explains. The teacher, Japanese national and paid by Japanese government comes twice to the school. But again, it is the peer learning that is driving a successful experiment in this 95 X 65 ft school with limited infrastructure. 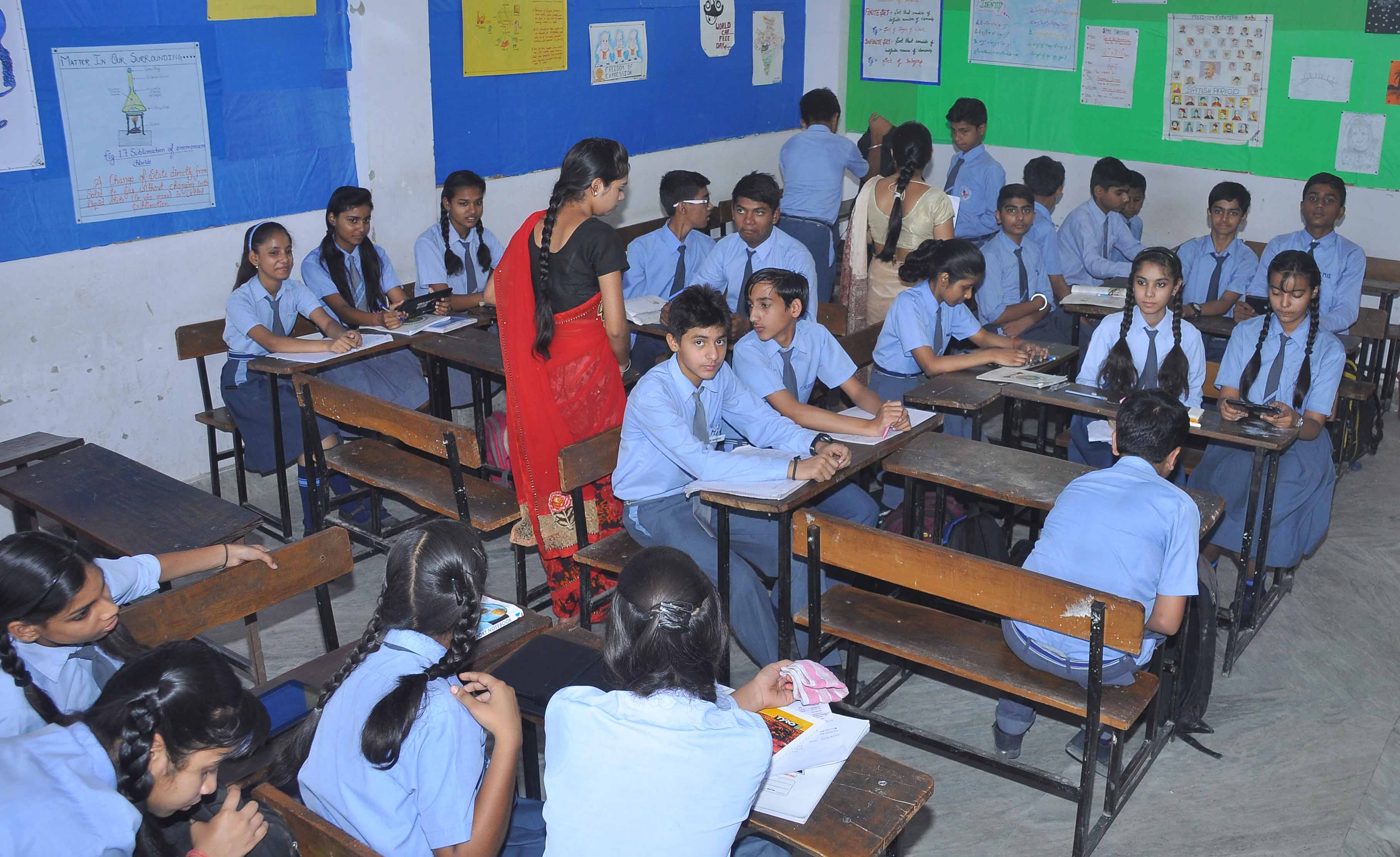 Thakur’s R & D intervention is not restricted to languages only. The school period system is also evolved. To begin with, the students get half an hour in the morning to unwind, mingle, and chatter through games, cultural & club activity or practicing some medical emergency method. Thereafter, the period that follow are of 1 hr 40 min duration. At the close of the school, there is a pictoral summarization of the day’s work.
Still a bigger practice that the school has pioneered and may well hold the answer to ailing school education in India as also the crisis due to teacher shortage, is how learning takes place in the classroom and beyond. The students are divided into groups of 5-6 and have a group leader on rotation basis. They read the lesson first all by themselves and underline things they don’t comprehend or understand. In what they call as the UPLC method, the things not understood are termed as problem area and with effort of teacher as the facilitator, the problem areas are discussed and learning takes place. Now the few students, who grasp and learn quickly, teach the rest. “Children learn from themselves much easily and faster than teachers. They are full of energy and school is not a silence zone. We have channelized this energy and allowed them to talk among themselves without the rigidity of only teacher talks and students listen. The seating plan is also make them talk to one another than look at black or white board. This way we pull up even those students who are difficult learners,” adds Thakur, who doesn’t forget to remind that the school is named after his mother Muni Devi. In his own connotation, the name is a gifted as in vedic culture munis were practitioners of the teachings rishis explored and evolved. 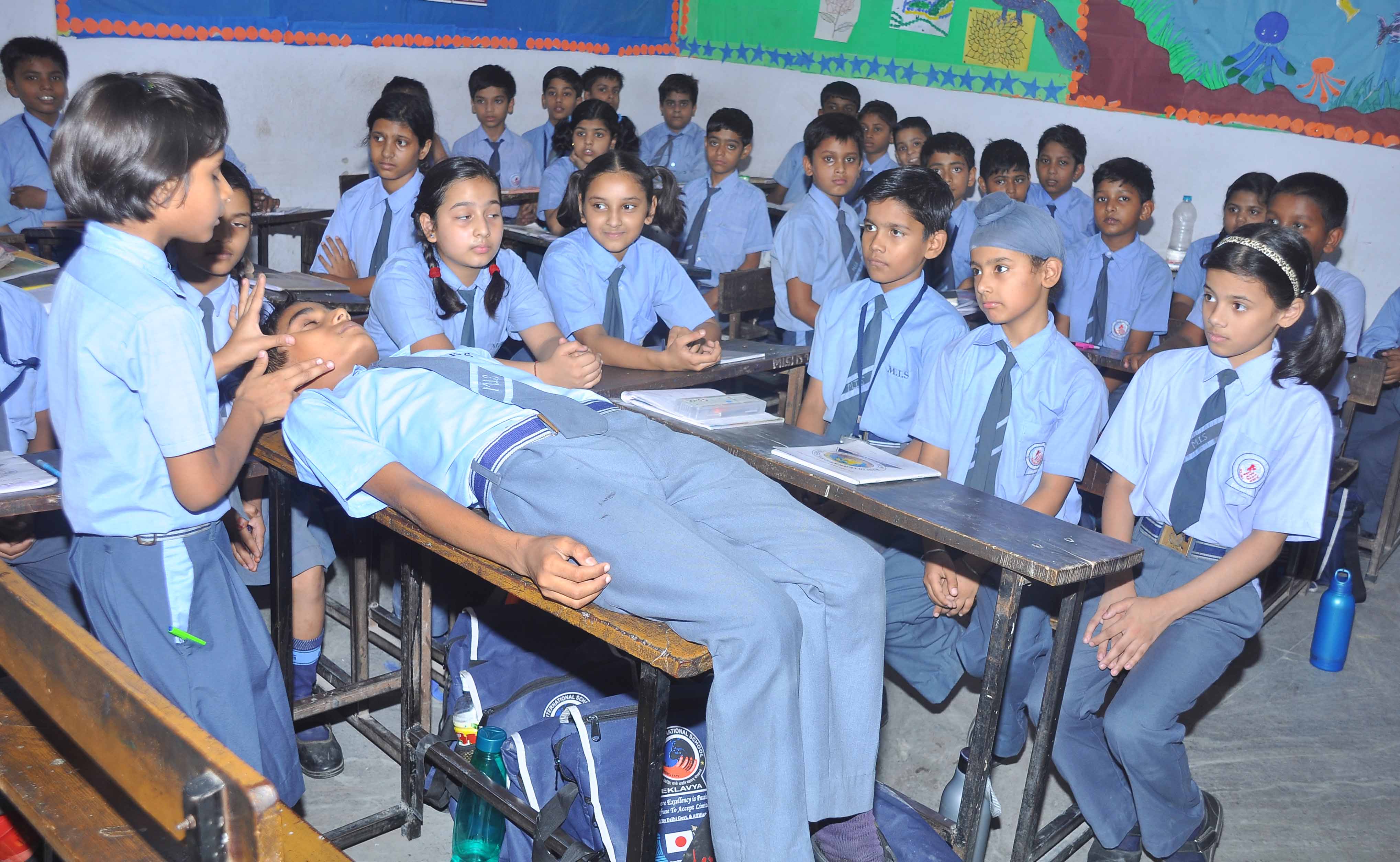 Such was the impact of perceived learning outcome for an inspecting state government disaster management officer that a few years back he pulled out his two children from the highly ranked Bal Bharati School in Rohini and admitted them here. He also got his brother to admit his children and  the two ferried their children personally 17 km up and down daily after buying a second hand car.  According to Thakur, school education which forms the basis for citizens of tomorrow, as of now is too much material than about moulding human behavior and teaching them for life. “We tend to make our children literate instead of teaching them how to learn. The missing link is impacting all aspects of life with mediocrity to corruption and lack of employability. But we have proven, it hasn’t be the case if we catch them young for good education.” That is how the school is recipient of Ashoka Foundation’s change maker school award. 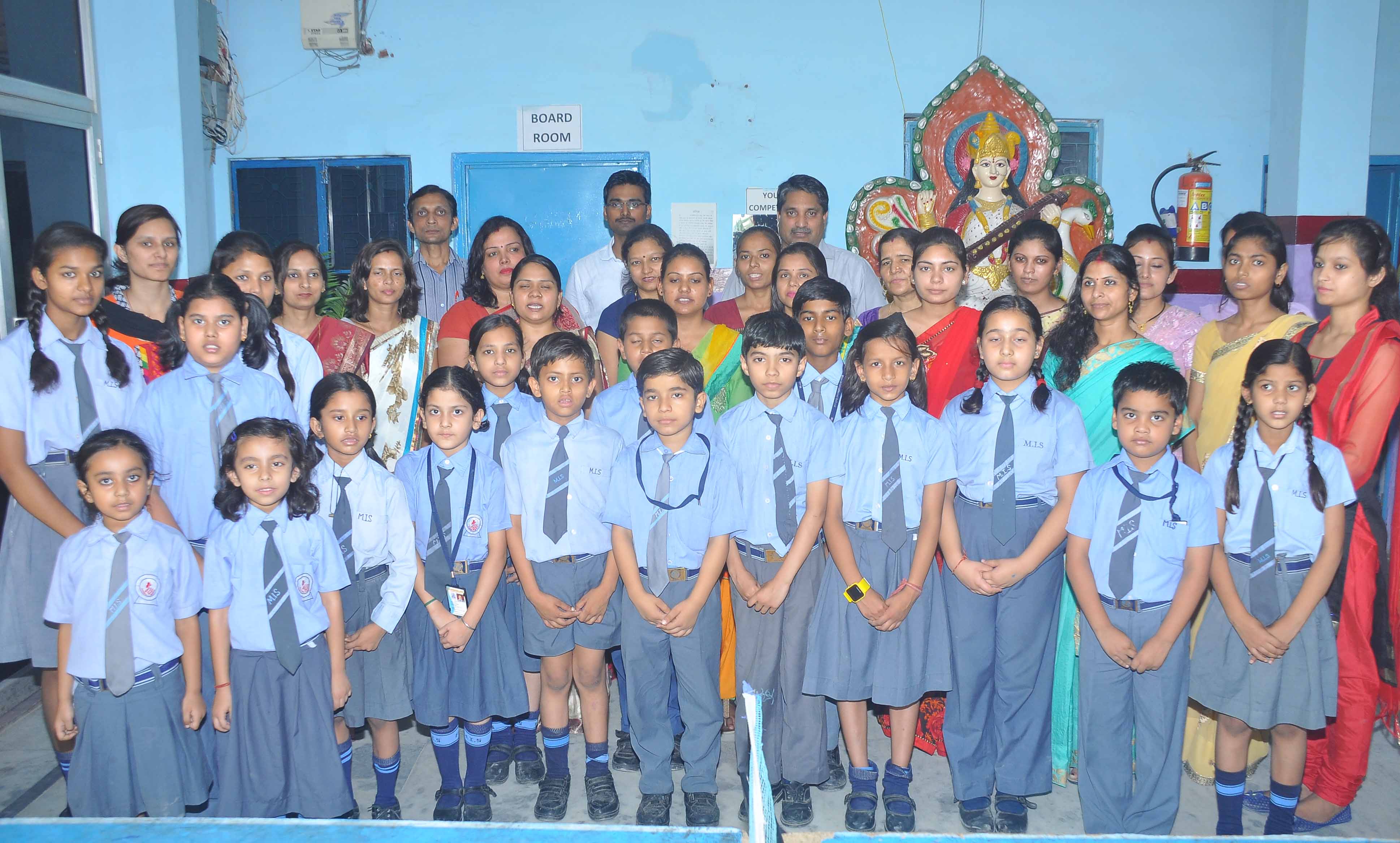