Just over seven-year old Dhruv Pandit, a class III student of Apeejay Svran Global School, Sector 21 (Faridabad) has been appreciated by the India Book of Records and recognized for winning the maximum number of awards (42) in a single academic year (2021-22).  These awards span over several Olympiads, music and marshal art competitions, intra-school and interschool contests and special competitions offered by some entities.

His inherent talent apart, what has made this long list of accolades possible for him is the enthusiasm, dedication and support of his doctor parents—Dr Sandeep Pandit (Consultant Non Invasive cardiologist and Diabetologist) and Dr Meenu Pandit (Consultant Pulmonologist)—and of course his school teachers who provided information on most of these competitions. 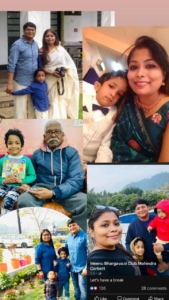 According to his mother Dr Meenu Pandit, Dhruv after academics is in mad love with music. He started learning and playing keyboard from an early age and has also been tutored for this. But what is more surprising is his  enrolment with BHU’s department of music for diploma in vocal music through distance mode.  For this he is training under a Guru thrice a week in the evenings.

So, how did Dhruv got initiated into music with no family member ever having even thought of it? Pat comes the reply from Dr Meenu, “Three months after his birth, I joined my duty and left him in the care of my parents. Now both of them are fond of old music and songs, so they would play the music and enjoy every bit of it. And it had an effect on Dhruv. Soon after he started talking, it was amazing to see he started following music and reproducing it. By the age of three he could remember the lyrics and reproduce some of it. We had given him a keyboard as well and he was thoroughly engrossed in all this.”

Like many young professional parents, Dhruv’s parents, wanted to provide him opportunities of holistic development. This led to him joining judo-karate classes in the evening and slowly he started likening it and learning it the hard way. He is a blue belt already with an aim to achieve a black belt in coming years. While all this looks normal and a familiar story, it was the participation in various competitions that has started giving him high and  drive to do more.

The pandemic which stole two years of school environment from children also came with an alternative that many children drooled on.  Dhruv probably due to a certain pressure of his activities didn’t get into gaming but online space allowed him to compete almost non-stop. “When schools shifted to online, we also prepared his room and apart from online classes, he also prepared for Olympiads. All this while his teachers wherever found a piece of information on competitions and challenges, would pass on to me,” says his mother. 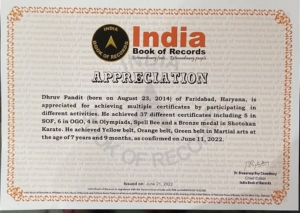 He started participating in Olympiad Society’s Olympiads from class I itself and in class II while schools were still online, he competed in most of them and won award in as many as 15. He also earned international ranks in science. All this has positively pushed him to watching informative TV channels like BBC Earth, Nat Geo, and Discovery Science etc.  Dhruv has also registered his talents with smush painting and continues to do well in drawing art; he has also won a gold medal by winning Spell Bee competition. In addition, he has also won medals from GEMS Education in their challenges. In near future, Dhruv will be participating in a mega-talent hunt programme in Faridabad where he will be singing a song while playing music on his keyboard according to his mother.

The doctor couple has been taking his interests and talent very seriously and providing him all possible opportunities as they decide on his participation after getting competition information from his martial arts coach, school and other sources. But like every parent, they too feel the pressure and exertion both physical and mental on a child his age is not good. “There is a difference between pushing a child into something and nurturing his talent. We are doing the later and are conscious of the fact that we need to look after him, feed him properly and ensure his childhood is intact. With schools now open, he will now be groomed by the school as much by us. We’ll continue to support his talent development as long as he needs it,” adds Dr Meenu.