The PGI Report for 2021-22 will be revamped by adding new indicators aligned with NEP 2020 initiatives to expand the coverage without altering total points. By doing so, Domains such as teachers, digital education, learning outcome etc will get enhanced weight in the Index. The revamped PGI 2021-22 will replace the redundant and saturated indicators. The marking system will also undergo changes making it more specific. The classification of points obtained by States/UTs will also be converged to the new classification adopted in PGI District structure. This is stated in the newly released PGI Reoprt for the year 2020-21. 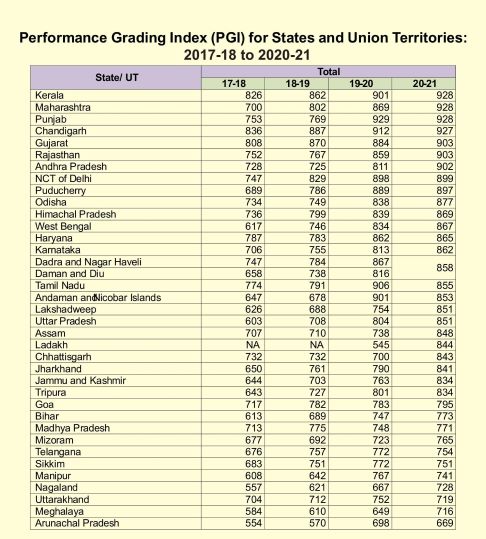 In the report, many States and UTs have made substantial improvements in many of the outcome parameters, along with measurable improvements in their governance and management-related parameters. Apart from this, the impacts of COVID-19 on some the parameters relating to teachers and student’s attendance could also be seen in this year’s report for few of the States/UTs. A total of 7 States and UTs, namely Kerala, Punjab, Chandigarh, Maharashtra, Gujarat, Rajasthan, and Andhra Pradesh have attained Level II (score 901-950) in 2020-21 as compared to none in 2017-18. 12 States/UTs joined Level III (score 851-900), 6 States/UTs joined Level IV (score 801-850), 6 States in Level V (score 751-800), 4 States in Level VI and one State viz., Arunachal Pradesh stayed in Level VII (score 651-700) in PGI 2020-21. A total of 27 States and UTs have improved their total PGI score in 2020-21 as compared to 2019-20.

The maximum and minimum scores obtained by State in 2020-21 are 928 and 669 respectively. The deviation between the maximum and minimum scores obtained by States is 259 or 39 %, of the minimum points, indicating that, State Arunachal Pradesh has to put more efforts to reach the top slot. This disparity was 51 % in 2017-18 indicating that, PGI also helped to bridge the performance gap among States/UTs over the years which may be due to efforts of the Government such as look East policy. The reduction in Inter-State differential is also due to close monitoring of schemes through evidence based PGI which might have helped both the performing and aspiring States and UTs to improve their performance.

The Performance of a State/UT is often perceived to be linked to the size (geographical area) of the State/UT as it has a bearing on several logistic, administrative and other issues. However, size does not appear to be a determining factor in the performance of States and UTs in the field of School Education as assessed by the PGI. Thus, Rajasthan, Maharashtra, Gujarat, Andhra Pradesh, Punjab, Kerala, and Chandigarh which are in Level 2, are ranked 1 st, 3rd, 5th , 7 th , 20th , 23rd, and 35 th respectively in terms of their geographical size among States/UTs. Similarly, the States which are in Level VI and VII are ranked 14th (Arunachal Pradesh), 19th (Uttarakhand), 24th (Meghalaya), 25th (Manipur), and 27 th (Nagaland) respectively in terms of geographical size.