In April 2016, India will publish its first-ever national rankings of institutions of higher education after the ministry of human resources development announced the national institutional ranking frameworks for engineering & management streams. In a related development, which may raise interest level in rankings further, Times Higher Education World University Rankings, London will publish BRICS university rankings, which would be revealed in New Delhi on December 2, 2015 writes Autar Nehru

This year September, though India has made its debut in the Quacquarelli Symonds’ (QS) list of top 200 universities globally with the Indian Institute of Science, Bangalore and the Indian Institute of Technology Delhi (IIT-D) having ranked 147 and 179 respectively in the QS World University Rankings for 2015-16, the rankings business is still vaguely understood and undervalued by most universities in India. Ostensibly stung by repeated failure of showing up in the global top 200 rankings in almost every world rankings survey, a kind of ‘blot’ over quality of higher education in India (aspiring to be a knowledge superpower), the government education establishment has come up with a scheme for national rankings of these institutions in the hope that such a setting will eventually propel some of country’s top ranking institutions into top global rankings. On September 29, after nearly a year when the union ministry of human resources development (MHRD) decided on setting up a reliable, transparent and authentic ranking system for higher education institutions within the country on the recommendations of heads of central and institutions of national importance universities last year August, documents for a new national ranking system framework called the national institutional ranking framework (NIRF) for engineering and management categories were unveiled. Similar documents for ranking universities along with architecture and planning institutions is expected to follow soon. NIRF envisages separate rankings for different categories of institutions in their own respective peer groups, the reasons supplied by the architects of the new framework are inclusivity and level playing field. According to the union HRD minister, Smriti Irani, the Ranking framework will empower a larger number of Indian Institutions to participate in the global rankings, and create a significant impact internationally too. “I see this as a sensitization process and an empowering tool, and not a tool for protection,” she said at the launch event.
Speaking at a seminar in Delhi, the newly appointed secretary for higher education, V S Oberio said that the first rankings, which are representative and as per India’s requirements, would be around April next year. “I don’t see this becoming encompassing and exhaustive in next two years, but a beginning to that end. Our framework is a moderated version of QS and is self-reporting. Though all central universities will be part of it, I hope good institutions from private as well as other sectors will aspire to be part of rankings,” he added.
Phil Baty, editor Times Higher Education World University Rankings, London who was in Delhi recently welcomed the move saying “India needs national rankings and national data collection effort. We want more universities from India to provide data, and we really encourage data sharing.” He acknowledged THE having problems in getting data from Indian institutions in the past.
At the same time private rankers in India feel the announcement is not a big deal. “With these rankings, nothing much will change and for sure world rankings about Indian institutions won’t,” says Premchand Palety, CEO of C-fore, a Delhi-based multidisciplinary research organization well-known for undertaking ranking surveys of educational institutions in India for national publications. Speaking about his more than 15 years experience of looking at the state of education through field visits and data collection about education institutions in the country, Palety says that instead getting into the business of rankings which the world over is undertaken by third party agencies and mostly publications, the ministry should have played a bigger role. “The governments rather should be proactive in faculty development and improve teaching and research. For instance the stipend for an IIT Ph D scholar must be about Rs 1 lakh instead of current Rs 30,000 which is not even sufficient to repay loan he or she may have barrowed. Silicon Valley is the gift of Stanford University’s research culture, the government should facilitate such a culture in our universities if it is really serious on competing with the best in the world,” he adds.
However, at the same time some experts believe that the step might unshackle the country’s public university system controlled by bureaucrats, who don’t want to be compared and don’t want to see the mirror. As it has been made mandatory for institutions to disclose practically every information publically by up loading on website, data is going to be easily available and a single government order can coerce even those who have remained afraid of assessments thus far, the experts argue. International experts provide more valid reason and support for rankings of higher education institutions from their own experience. Prof Tim White, school of material sciences & Engineering, Nanyang Technological University, Singapore, says rankings have a role, “good rankings keep best students in the country. You need them for credibility outside India at world stage. These attract investments easily, international students and provides international visibility.” Rankings are important indicators of progress and therefore help country. Top institutions align themselves with the focus area of the country and get funds as well as support national activities. According to Prof A K Azad Choudhury, professor emeritus, University of Dhaka, Bangladesh, “There is a need for emphasis on higher education than what we tend to have on primary education in this region because higher education is bed rock of many things that determines your development and standing in world.” 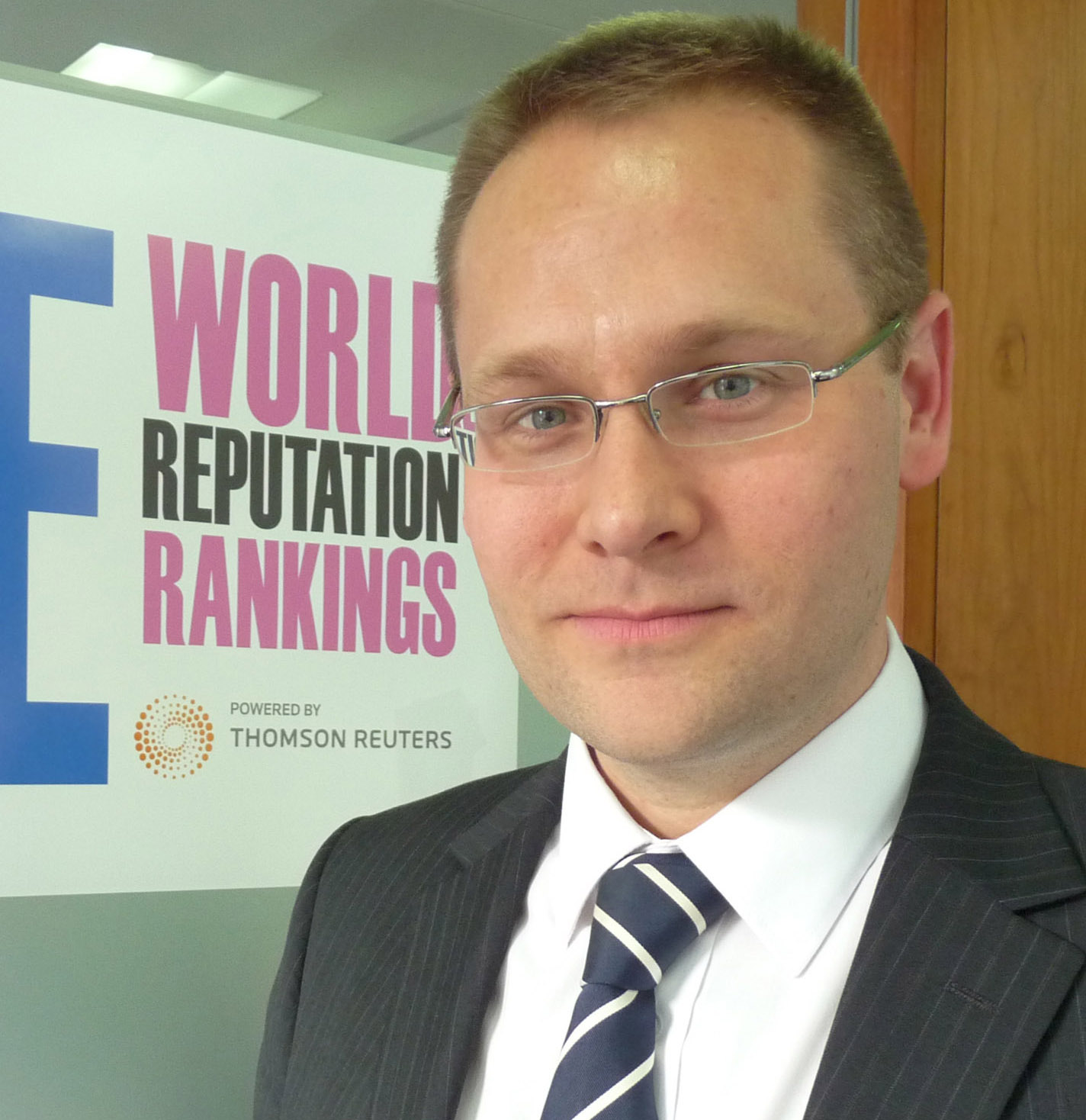 Phil Baty, editor Times Higher Education World University Rankings, London who was in Delhi recently welcomed the move saying “India needs national rankings and national data collection effort. We want more universities from India to provide data, and we really encourage data sharing.” He acknowledged THE having problems in getting data from Indian institutions in the past.
So, overall, the move of the ministry of HRD is a step in right direction which incidentally will be the first ever such India-centric framework. The proposed national ranking will be calculated on five broad generic parameters, namely: (1) Teaching, Learning and Resources; (2) Research, Consulting and Collaborative Performance; (3) Graduation Outcomes; (4) Outreach and Inclusivity and (5) Perception. For scoring purpose, Teaching, Learning & Resources (TLR) will carry 100 marks and a weightage of 0.30 points, Research, Professional Practice & Collaborative Performance (RPC) will too have same 100 marks and 0.30 weightage. Graduation Outcome (GO) will comprise of 100 and will carry a weightage of 0.15. Outreach and Inclusivity (OI) will again have 100 marks 0.15 weighage, while as the last generic parameter Perception (PR) will have 100 marks and 0.10 weightage. 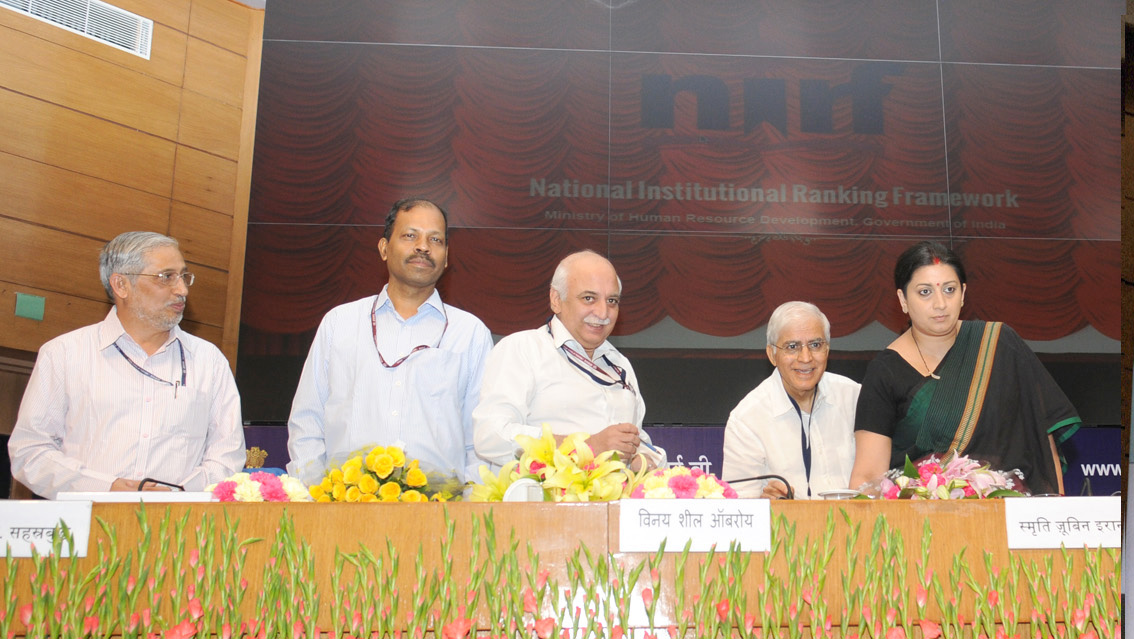 There will be an Implementation Core Committee (ICC), which will oversee the implementation of ranking work for the first year, after which a suitable Ranking Agency duly authorized to receive and verify the data, and declare the rankings, would be set up. “The Ranking Agency should invite institutions intending to participate in the ranking exercise to submit their applications in the given format by 31st December. The Ranking Agency will then extract the relevant information from this data and through software, compute the various metrics and rank institutions based on this data. This process should be completed in about 3 months, and rankings published ahead of the next year’s admission schedule,” says the NIRF document.
Also, a two-category approach is proposed to ensure that an institution is compared with an appropriate peer group of institutions, and provide a level-playing field to all. “In the early stages of its work, it became clear to the Core Committee that a single ranking framework for such a complex scenario of institutions would be counterproductive, and even meaningless. This led to the conclusion that a ranking framework should be designed that enables an apple-to-apple comparison,” writes Surrender Prasad , Chairman, National Board of Accreditation Member, Core Committee member in the preface of released documents.
The process of framing NIRF began on October 9, 2014 when the MHRD ordered setting of a core committee for this purpose. As a result, a 16-member committee comprising Secretary (HE), MHRD (as chairperson), vice-chancellors of Delhi University, EFL University, Hyderabad, Central University of Gujarat, Gandhinagar, JNU, New Delhi , directors of IIT-Kharagpur , IIT-Madras, IIM Ahmedabad, IIM Bangaluru, NIT, Warangal, Telangana, School of Planning & Architecture, ABV-IIITM, Gwalior, IISER, Bhopal, NAAC, Bangalore and Chairperson, NBA, New Delhi Member besides additional secretary (TE), MHRD, was formed, which after several sittings and exchanges finalized the framework. It may be mentioned that the terms of reference of the Committee were to suggest a National Framework for performance measurement and ranking of i. Institutions; ii. Programmes; and also to recommend the organizational structure, institutional mechanism and processes for implementation along with time-lines of the National Ranking Framework besides mechanism for financing of the Scheme on National Ranking Framework and linkages with NAAC and NBA, if any.
In view of the diversity in nature and quality of the Engineering /Management institutions in the country, the committee proposed that ranking be done separately across two distinct categories. Category A: Institutions engaged in Research and Teaching. And, Category B: institutions engaged primarily in Teaching. Category B institution may choose to be ranked in both categories. All institutions that have been granted academic autonomy (by the appropriate authorities) will normally be classified as Category A institutions. All those affiliated to a University will be classified as Category B institutions. An autonomous college, however, which is engaged primarily in teaching, may also opt for being ranked in Category B. To elaborate, Category A would comprise of Institutions of National Importance set up by an Act of Parliament, State Universities, Deemed-to-be-Universities, Private Universities and other autonomous colleges. Category B institutions, on the other hand, are affiliated to a University and do not enjoy full academic autonomy. The weights assigned to different components have been slightly adjusted to reflect the different mandates and expectations from institutions of the two categories.
About the assessing mechanism, the proposed framework says that a suitable Ranking Authority/Agency should be identified or formed and empowered. “Instead of creating another organization, however, it may also be visualized as a Virtual Authority, authorized to outsource parts of the work (including data analytics) to various survey organizations. The entire effort could be self-supporting, if the institutions desiring to participate be charged a suitable fee for this purpose. Initially, the ranking agency should be provided with a seed funding to roll out the process in a time-bound manner.” For some of the parameters, the data could be populated from internationally available Databases (like Scopus, Web of Science, or Google Scholar etc.). This is indicated in the Assessment Metrics. The Ranking Agency should directly access data from these resources, if necessary for a payment. Similarly, some data can be made available through a national effort. For example, data about success in public examinations can be easily compiled, if all concerned bodies (UPSC, GATE, NET, CAT, GMAT, CMAT etc.) conducting such examinations prepare an institution-wise list providing details of the total number of aspirants and successful candidates from each institute. Also, Universities, including affiliating ones, should be able to provide examination results data in the appropriate format to evaluate the component of Graduate Outcomes (GO).
With an estimated 8 million students by 2025 in higher education in the world, international students place a lot of value on rankings. Therefore, rankings which have already become a kin d of geopolitical tool, will have impact on policies and stimulate debate. And, with India getting reluctantly and belatedly into rankings business, a lot will change for higher education in India very soon for better perhaps?