With a 125-strong primary-cum -senior secondary school chain operating under a single family run management across India, Mumbai-based Ryan International Group of Institutions (RIGI) is arguably the most successful private school enterprise in India and also the largest family-owned school chain. The group, while continuing with its expansion of setting up more schools in India and value addition to its curriculum & co-curricular activities, is lately also harbouring global ambitions with RIGI already having opened two schools in UAE. The group schools are currently mobilizing 100 million Kilograms of food under Food Bucket Challenge for the needy & orphanages. 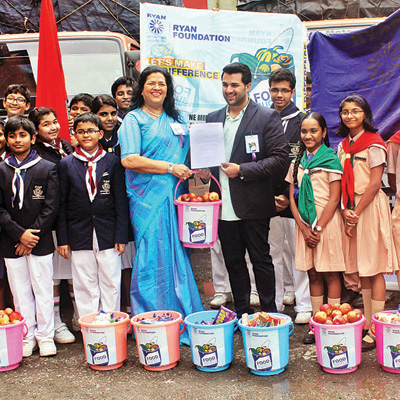 THE STORY GOES LIKE THIS. One of the nine children born to a modest family in Mangalore (Karnataka) after studying at St. Aloysius High School, Mangalore and graduating in economics from Loyola College, Chennai, comes to Mumbai for work and finds the job of a clerk in Bharat Swiss Plastics in 1970. Two years later, he loses his job as the company shuts down. In the distressing circumstances, upon recommendation of a friend, he temporarily gets the job of a primary school teacher in Malad on the periphery of Mumbai. While working with the school and its principal, he falls in love with teaching and discovers abundant aspirations for English medium school education among middle class people. And in 1976, he sets up a small school in Borivali East, which fails to take off. Dr Augustine Francis Pinto, the founder-promoter and the chairman of RIGI as we know him today didn’t let circumstances take over reins of his dream destiny.  His marriage to Grace Albuquerque (now known as Madam Grace Pinto, the managing director of RIGI), a maths teacher in 1974 proved  a blessing as the couple shared a common cause and added up to a fruitful partnership as the later success proves. In 1983, he eventually succeeded in turning around his first school by the name of St. Xavier’s High School in Borivali East, a Mumbai suburb. This catholic school from class K-10 and affiliated to Maharashtra state education board became the foundation building block for nationwide growth and expansion of RIGI in coming years.

The early years of growth for the group were based on trying to spread education across the country especially in areas where high quality English medium education was not available. This meant travelling to the interiors and encountering many regulatory and other difficulties. Schools were built where there was hardly any habitation. Many such areas have now become thickly populated and schools well-settled. Dr Augustine F Pinto attributes divine inspiration and guidance behind the spirit of his vision saying, “God planted a seed in my heart and directed me to spread affordable, high quality English medium education within Indian society.” However, there is much more than just the God (well-seated in Ryan Group schools and invoked frequently in official functions) or divine blessings that has gone into RIGI success. According to an observer who doesn’t wish to be named, the flexible approach adopted by Pintos did the trick. “Unlike the conventional convent schools, which perpetuate standardized learning architecture, ethos and majorly stick to Council for Indian School Certificate Examinations (CISCE) affiliation, Pintos challenged that notion and customized their schools to suit local needs. They went for different and convenient board affiliations, variable fees from school to school and even localized school building design. But all this while ensured centralized control, branding and a reasonably high quality education. The second big factor in growth of RIGI has been its unwritten policy of marketing (networking in modern day parelnce) itself to underserved areas, new settlement habitations and politicians of all political parties. And it has worked well,” he adds. The group has set up schools in VIP constituencies  as well to keep right connections across political formations.

The strategy has paid off and today, the Ryan International Group of Institutions has 128 schools (only two are residential) spread across 18 states in the country with more than 2.5 lakh students and 16000 employees. Not only that, the Ryan Group is working towards establishing its off-shore school campuses and has already two school in operation in the Middle East. A dedicated faculty, trained and led by the mentors, supported with state-of-the-art infrastructure and ICT, Ryan operates schools under various boards – CBSE, ICSE, ISC, SSC & HSC, and has schools offering education under the IB (International Baccalaureate) & IGCSE (Cambridge) curriculums under the aegis of the Ryan Global Schools and within various  price brackets. The group is run in a corporate style with Ryan Pinto, the son of Pinto couple and a master’s degree holder in business and entrepreneurship from Cass Business School, London as its Chief Executive Officer. He along with Dr Pinto and Madam Grace Pinto form the top leadership of the group.

The vision that started three decades earlier  and built on premise of providing affordable English medium ‘convent’ school education within easy reach of the burgeoning middle class population has now become one of the most formidable success stories of our times. With its innovative approach to education and insistence on focusing on the all-round development of the child, the Ryan Group has been at the forefront of pioneering a new kind of education in the country. Over the years, education has undergone a tremendous change and Ryan’s progressive views in academics have been broadly based on the Multiple Intelligence theory of Dr. Howard Gardner, professor at Harvard University that leads to literacy, inquiry, creativity and critical thinking. With such a successful model and such a huge enrolment of children, the group has a definite impact on the school education in India. “I would call it the culmination of the Lord’s blessings, dedicated efforts and years of perseverance. We have remained sharply focused and anchored to the true essence of education and made a difference with some innovative educational endeavors that have helped us remain ahead in the curve,” says Madam Grace Pinto, the flamboyant managing director of RIGI and the most recognizable face of Ryan brand of schools. The group also has a centralized teacher development program, which facilitates not only in-service training workshops but also sharing of best practices. “We intend to build on the current strengths we have and spread the cause of education. We are closely studying the developments in the teaching-learning processes and piloting some studies in our schools. We are also looking at building a teacher training school to help us meet the need for quality teachers,” adds a group official.

By all means Ryan schools provide an excellent sports infrastructure in its schools and also avenues for students to excel in sports and outdoors. Ryan has partnered with the Baichung Bhutia  Football  Club, Mahesh Bhupathi Tennis Academy, Vishwanathan Anand Chess Academy, Anil Kumble for Cricket and so forth to provide world class training for sports-loving children. Ryan Sports Club organizes Ryan MILO  and Ryan Maggi Minithon across the country at various venues every year.  While the group ropes in the best from the sporting field, Ryan also provides opportunities to excel at both national and international level.

The group has also endeavoured to provide diverse platforms on both national and international fronts that would take students beyond the traditional classroom prism. Being in the field of education for the past three decades, Ryan has pioneered and developed several unique practices of both national and international repute that provide students with a wider experience. Ryan has adopted what it calls as the KASSM (Knowledge, Attitude, Skills, Social and Moral Values) approach. It was perhaps the first school group Indian Model United Nations (INMUN) and also stage International Children’s Festival of Performing Arts (ICFPA). Both the events are on the annual calendar of the group.

In continuation of its desire to stay ahead and realize its stated motto of “Excellence in Education & All Round Development” RIGI has also introduced the concept of education through media & film making. Some of the software and animation produced by students is even provided to TV channels as a result.  The Group schools are also part of UK India Education and Research Initiative (UKIERI), which aims to substantially improve educational links between India and the U.K.  Its students have travelled to 60 countries for various educational and cultural exchange programmes.

Ryan was the first group of schools to include computer education in the curriculum, way back in the early 90’s. Being aware that children want learning to be very engaging and experimental through the usage of modern tech tools, keeping with the times Ryan has already incorporated the usage of tech tools like smart boards, myclassboard – portal and many others to enhance the learning experience amongst students. Use of digital technology is one of the cornerstones of the group’s vision for the developments of the schools & students.

Again a part of its core philosophy has been community service to inculcate social responsibility among its students and also provide them a window to sensitize social realities and to build an attitude of selfless service. The group has undertaken initiatives in support of Society such as adoption of orphanages, blind homes, and homes for the elderly; community outreach programs, village adoption, hygiene programs and health camps; environmental awareness drives; and the provision of relief and rehabilitation measures for disaster-affected communities. Very recently, it launched ‘Food Bucket Challenge’ with the mission of collecting one million kilograms of food (cereals, pulses, etc) for distribution among orphanages, old age homes and other needy people through voluntary groups. According to a group official, the target would be achieved by end of this year as students are enthusiastically participating and people are also forthcoming. This will yet another milestone in Ryan group’s growing stature and appeal. Not surprising therefore the Group is a recipient of 80 prestigious awards, eight Limca Book of records and this year 13 of the Ryan schools were awarded the “International School Award” by the British Council.

The group has been adding 3-4 schools every year but is also receptive to change and diversification. RIGI have also ventured into international boundaries by establishing friendship institutions all across the globe. Its future plans include getting into higher education and setting up of a university.

To sum up in words of Madam Grace Pinto, “Ryan has been at the forefront of changing the paradigm of education. We are now in the process of gearing ourselves up for the next level of growth.  We hope to leverage technology in offering quality education to inaccessible parts of India and enable the children of India to benefit from high quality English Medium education feasibly and also scale up presence in the entire South Asian region.”