According to a statement issued soon after the first meeting of the reconstituted CABE (Central Advisory Board of Education, the apex advisory panel on education in India) committee that took place on August 19, in New Delhi, there is a broad census among states to do away with the ‘No detention Policy’ and bring back assessment (examination). Barring Karnataka, almost all states reportedly favored diluting of section 16 of the Right to Education Act, 2009, which says, “No child admitted in a school shall be held back in any class or expelled from school till the completion of elementary Education.”  However, the union HRD ministry under Smriti Irani much like as in the case of scrapping of Delhi University’s FYUP where it made UGC the fall gay, doesn’t want to take blame or be seen a party to pushing RTE Act amendment. So, it has directed states to send their comments in writing with 15 days (that is by September 4). Irani also indicated a reversal of former HRD minister Kapil Sibals’ decision on making 10th class board option after the meeting. In effect, class X board exam may be back soon. 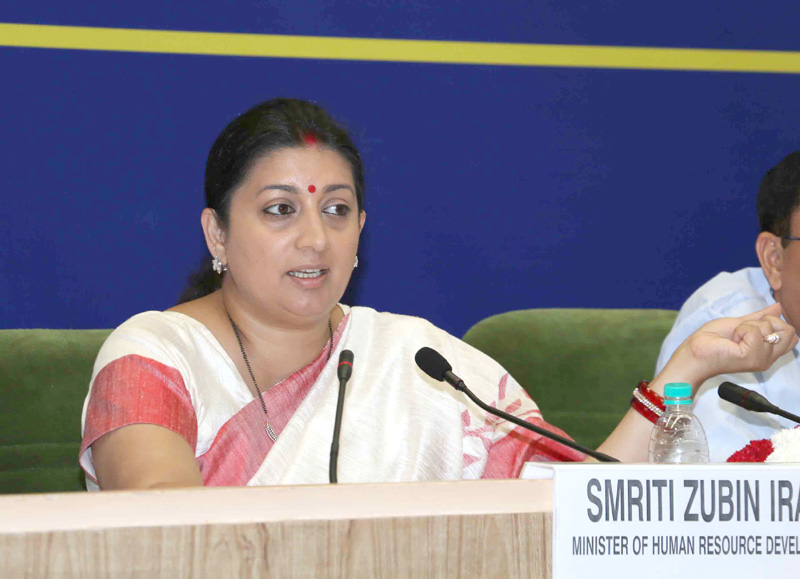 Following the enactment of the Right to Education Act, 2009 on April 1, 2010, a lot of attention and discussion has been on the impact of section 16 (no detention policy under which each student irrespective of his academic performance has to be promoted to next class) of the Act on learning outcomes and a ‘consequential’ dilution of education quality in schools as well as inability of these students to cope with class IX and beyond curriculum.  In line with this perception and vociferous appeals from some states and educationists, during the 59th CABE meeting in June 2012, a sub-committee headed by the then Haryana education minister, Geeta Bhukkal was formed, which eventually submitted its report in September 2013 and actually by majority view recommended a rethink on the provision.  “While theory and theoreticians may have a strong case for retaining the provision of “No Detention” (this view has been specifically put forward by two members of the Committee), the practical reality and experience across the country, across the stakeholders, clearly shows that ground is not ready to receive this positively. In absence of ground preparation, the intentions of the provision have not been met at all. Since it is a serious issue related to future of our children, we need not act in haste. We need to stop, re-assess and then move forward. At this stage, it would be prudent to re-iterate the need for assessment of learning outcomes and make it consequential by linking it to promotion or otherwise to the next class beyond Grade V,” the report concluded. Since then, the recommendation has been hanging fire.  And ever-since the NDA government took over, the demand has again picked up for action.

Even some educationists see no big deal in bringing back assessments and retaining under performers in the same class. “Failure is a reality of life and without experiencing it a child’s life will be lopsided. Some people need more time to learn. And schooling is the foundation of education, so if it is weakened by promoting a child irrespective of learning outcome, you aren’t helping either the objective of child or society by way of knowledge transaction. By letting the child bypass benchmarked learning outcomes, you are only burdening his subsequent academic future with unfinished education.  It hasn’t to be seen in a negative connotation, but a line has to be drawn. Whether it should be class III or class V can be decided later, but first you have to agree that straight away promotions aren’t good,” says Rachna Pant, Principal of the Ramjas School, R K Puram (New Delhi).

However, notwithstanding, this overwhelming support for repeal or modification of section 16 of the RTE, Act, the fact remains that any such amendment has to pass through parliament and perhaps a whole body of research, which clearly provides evidence of the benefits of no detention policy against retention. Recently, a group of parliamentarians have come together in support of activists who are against dilution of RTE Act and want the government to accept that implementation of the Act has largely failed and through an amendment to the Act, the government makes fresh deadlines for its effective implementation. So in the first instance, the amendment may not find easy support in the Parliament.

The Bhukkal committee report ironically cites one study by the International Association for the Evaluation of Educational Achievement, which found no absolute relation between retention policies and overall pupil achievement. It noted that pupils in the Scandinavian countries and Japan, which have done away with grade repetition, typically perform well above the international average on comparative examinations. Further it concluded that a review of the research on grade repetition provides no conclusive evidence to support the hypothesis that repetition is a more effective way of helping low achievers than automatic promotion. Also, the states which are lagging behind in Educational Development Index (DISE 2012-13) Jharkhand, Uttar Pradesh, Assam, Tripura, Madhya Pradesh, Odisha, and Meghalaya have all shown positive results both in terms of pass percentage and number of candidates appeared. The candidates of Class X pass outs of 2013 availed just one year no detention facility under RTE Act, 2009 though 28 states have no detention up to different classes. The results clearly demonstrate no negative impact of the No detention, rather illustrated positive impact.

The issue has also been made complicated by Comprehensive and Continuous Evaluation or CCE, which is provided under section 29(h) of the RTE Act. As the concept is not understood by an overwhelming majority of teachers/school administrators and no sufficient in service training of teachers has gone into it, the evaluation system has become a joke and a burden for all from students, teachers to parents. So, any tinkering with section 16 will also have to effected in CCE provision. Anita Rampal, professor, department of education, Delhi University who also played a pivotal role in framing the policy as per a report in Times of India, ascribes the demand for removal of ‘no-detention clause’ from the RTE Act to ineffective implementation of provisions of the law. “Continuous and Comprehensive Evaluation (CCE) was not understood well, including by the CBSE. Manuals produced by CBSE were not sufficient and teachers also never got any meaningful orientation. It was produced in a traditionalist paradigm,” she explains. She points out that despite CCE, questions in school examinations continue to be such that only rote learning will help. “Our system is stuck on giving remedial measures rather than going for supportive measures.”

In such a complex situation, it would be difficult for government to make amendments to satisfy state politicians but disregard expert opinion. Low teacher accountability,  lack of a pedagogy that sufficiently addresses multi· level environments, insufficient teaching skills, insufficient systemic support are some areas the government should place its attention to than blaming the ‘laxity’ under section 16 for poor quality education in schools as also to prevent undoing of government schools in country.

An alarming 54% Indians turn to social media for factual information: OUP’s The Matter of Fact report

“In a country like India, with a large young population, it is imperative to build process…