India’s central secondary education board, the central board of secondary education (CBSE) with over 17,500 affiliated schools in country and abroad has finally taken a call on the issue of weighty school bags being ‘shouldered’ by students to schools and back home.  In an advisory through a circular dated September 12th, the CBSE has suggested measures to lessen the burden of school bags under three categories—schools, teachers and parents.

The CBSE has asked schools to highlight and generate awareness on health issues concerning overweight school bags. Experts from medical field have over and again warned of ill health effects of heavier school bags carried by children.  In a major relief for little children of classes I-II, the board has advised against assigning any homework to them thereby ending the need of carrying a school bag to school by them.

The issue of overweight school bags has baffled everyone, it has been discussed and debated for decades (The Government of India in fact appointed a committee under the chairmanship of Prof Yash Pal in 1992, which came up with a report and set of recommendations) and yet so far no solutions have been adopted. The renowned novelist R .K. Narayan, who was a nominated member of Rajya Sabha from 1986-92 in his maiden speech spoke on the very issue saying, “My his heart bleeds whenever I see young boys and girls going to school laden with books which they could hardly carry. This burden does not improve their minds; it only makes them hunch backs.”

On face of it, a survey by release by ASSOCHAM ahead of Teacher Day this month (September) on weight of school bags says that 68% of children between 7-13 years going to school face the risk of backaches and other related problems, courtesy heavy loads of books and sporting kits, they carry in their school bags which weigh between 40-45%t of the weight of the kids. The survey has singled out private schools, whose student bag weighs heavier than government or KVS schools. So, the CBSE advisory has come bang on when the issue has been revived by the survey.

Heavier school bags are known to have adverse effects on health of growing children and if such bags are used for a prolonged period, the impact may well be irreversible. Young children whose spine is at a crucial stage of growth are the most susceptible ones to hazards such as back pain, muscle pain, shoulder pain, fatigue and in extreme cases the distortion of spinal cord or shoulders that may most plausibly be attributed to heavy school bags. “In this context, schools can play a significant role by sensitising students, parents and teachers,” the circular said while adding that schools may take any possible measure of their own leading to reduction of the weight of school bag as they deem fit.

In its suggestions to schools, the board has asked its affiliated schools to engage students in the process either by integrating knowledge about bad effects of heavier bags across scholastic and co-scholastic areas or by sharing it during school assemblies. “The theme such as Adverse  effects of Heavy School Bags may be included in various activities and functions conducted in school,” the circular by K. K. Choudhury, Director (A, R, T& I) said. 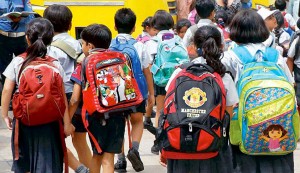 Schools have also been advised to encourage students to repack their bags on daily basis and to avoid carrying unnecessary articles, textbooks, workbooks that are not needed. For this schools may check school bags randomly to ensure the proper weight of school bags. According to the advisory, schools may ensure the adequate supply of potable and safe drinking water for everybody and counsel students not to bring the heavy water bottle to school.  “This may be possible if all the teachers including principal consume the same water that is taken by their students. Regular quality checks of water may also be ensured,” it adds.

Schools should design weekly timetable in such a way that minimum number of textbooks and workbooks are required each day, keep separate provision for students to complete their assignments/projects during the school hours under direct supervision of teachers and take extra care to preclude the possibility of carrying large number of  books/workbooks, atlas, drawing board etc. or other article by students. Also, students need not carry extra pair of sportswear throughout the day rather they may be allowed to wear it for the entire day are some other suggestions by the CBSE.

For  teachers, the guidelines suggest that they should work towards dispelling fear of students for not brining text books or work books to class by providing clear instructions before hand and also pairing of children while sitting so that books can be shared between them. “Teachers may be asked to use loose sheets for the workbooks as it reduces the weight of school bag and facilitate the checking by teachers as well. Teachers would also require carrying less test copies. They may be encouraged to use alternative methods of teaching like the ones based on ICT to alleviate the dependence on textbooks,” the circular says.

In the same spirit, parent community has been asked to remind and supervise children in repacking their bags everyday as per the timetable and ensure that their wards do not carry unnecessary items such as story books, playthings etc. to school. “The bag should be put on tightly to the child’s back, rather than hanging off her shoulders.  Children are often in the habit of storing things in their school bags, therefore regular cleaning of the school bag is essential,” parents have been advised.  “ We hope this order is implemented because we particularly feel bad and irritated when a teacher asks us to bring a book or note book and is either absent or doesn’t make use of it,” says Tejas, a class X student studying in a private school in Delhi.

Reacting to the news Ashok Pandey, chairperson of the National Progressive Schools Conference (NPSC, a group of 120 elite cbse affiliated schools) and Principal, Ahlcon International School, Delhi,  says, “The issue of increasing load of school bags is a serious one.. Unfortunately, the matter never got the attention it deserved. The renewed emphasis on reducing the load has a chance of success only if there is a commitment across schools, parents, teachers and school leaders. It calls for tweaking the timetable, diligently reducing the number of books and notebooks, provision for keeping books in the schools, innovations in class and homework and device-based learning. I very strongly feel that each school should adopt the suggestions made by the CBSE.”

If CBSE schools indeed follow the just released guidelines, it could perhaps trigger an avalanche effect and kill this issue that hurts every child so much.