The uncertainty of several weeks over civil services preliminary examination of this year is over and will be held as per schedule on August 24. There has been a high pitched agitation against Civil Services Aptitude Test (CSAT) first introduced in 2011 and the new pattern introduced in the Main examination in 2013 besides other issues concerning aspirants of the coveted services.”As for this year, there is no scope for postponement of (UPSC preliminary) examination,” Parliamentary Affairs Minister M Venkaiah Naidu said as opposition created uproar in Rajya Sabha demanding an all-party meeting immediately early this month. Naidu said the UPSC issue requires “deep” study and discussion with political parties and other stakeholders as there are both sides of the argument about the CSAT in UPSC.”…after the session, government is ready to discuss it with all” to reach a consensus, he said, adding the government has taken a correct decision in this regard and minds of students should not be disturbed. 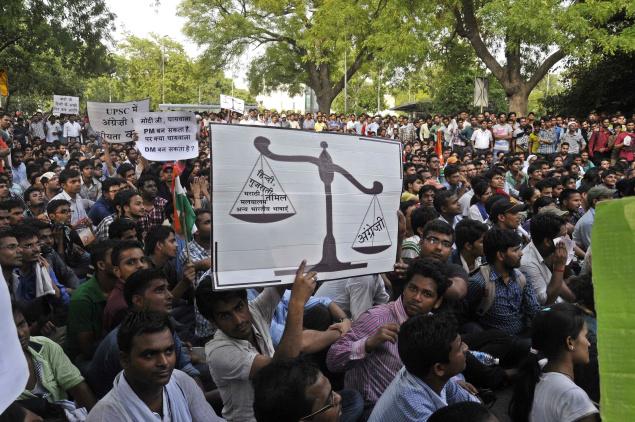 UPSC, in 2011 had introduced the CSAT pattern in the Prelim examination involving reasoning and mental ability test requiring speed and accuracy. The questions were printed in Hindi and English and were seen as advantageous to Hindi medium students because they can grasp the question reading in their mother tongue and answer them faster than the other linguistic group who can only follow through English script. Then now in 2013, UPSC has done a pattern change for the Main examination, doing away with language paper of qualifying nature, besides brining in few other changes.

Further changes UPSC has brought in the Main examination 2013 is that if a candidate has done his education through a regional language medium at the degree level is only eligible to write the Mains examination in that language. The new UPSC norms have created a furore among the linguistic groups in India. Agitations have already begun in Maharashtra, Karnataka, Andhra Pradesh, Gujarat and Tamil Nadu. The arguments against the new UPSC pattern is, many candidates may be deprived of writing the exams in a regional language even being more comfortable in that language because they have not done their studies through the regional language medium.

Candidates of Indian languages and rural background the group that is protesting the current examination system of civil services (held for a 1000 posts annually for which 3-5 lakh candidates sit in the preliminary exam of which about only 15000 or so reach the mains exam stage) says that candidates of their background are at an disadvantaged position in the present system and are therefore demanding a level-playing field. They say that Civil Services Aptitude Test paper II (CSAT-II) in the prelims places candidates with Hindi and other Indian languages medium, and candidates with Arts and Humanities educational background at disadvantage. They demand the  rationalisation of the difficulty level of the English qualifying paper in the Mains by aligning its difficulty level with difficulty level of Hindi and other Indian languages. They demand that model answer books of Mains exam question papers be made  available in all Indian languages. Further ensuring that the answer books are marked by examiners of the respective Indian language in which answers have been attempted and ensuring that marking across languages is calibrated. Ensuring that the translation of Prelims and Mains question papers into Hindi is not done by machines and the tanslated question papers should be readily comprehensible, the group is also demanding that the interview board should have clear instructions to not to force candidates from Indian languages to speak in English during the interview. Saying that the civil services exam must essentially be language neutral as India is multilingual, discipline neutral as these services have been conceptualized as generalist services, etc. Earlier, government had announced marks of English will not be included for gradation or merit in UPSC exam.

Even statistics show Hindi-medium and arts background candidates’ success has dropped with the introduction of the aptitude-cum-English exam. With a number of engineering and management graduates increasingly filling up civil services posts, the divide is becoming more obvious.

The  other side of the debate is if it is alright to have administrators without modern-day communication, English and technical skills? English is a global language. Most of the work of the Government in India, and a larger majority of the work around the globe  especially between nations  is conducted in English. Also, it is among the five recognised languages of the United Nations Secretariat.  The entire training aspect of post selection, including in Lal Bahadur Shastri National Academy of Administration (LBSNAA, Mussoorie) is conducted in English. More than these issues, English is the link language within the country.

Civil Services being a central government services with an all India character, it would be really difficult for the UPSC to cater to the demands in 22 regional languages mentioned in the 8th Schedule of the Indian constitution.

So,  it is really a big challenge before the stakeholders when they meet to address the issues while maintaining meritocracy and steel frame character of the civil services.