A growing number of small Innovative Edupreneurs across India are aiming at a valued impact on bettering the education in as many ways as their numbers. Some of the innovations could well prove to be disruptive anytime soon says Autar Nehru after attending a Meetup of nearly 40 of them in Delhi

EACH OF them got to speak about three minutes. But it was time enough to register their innovation/idea on the minds of fellow edupreneurs in the audience because all of them, banking on technology use, sounded passionate and believers in what they are doing. And the presence of senior people from biggies like edX, Khan Academy, and their measured talks and presentations tuned the event into a mini conference and a networking event. Precisely that was the objective of the group by the name of EDIX – Educational Innovations Exchange, an Edtech startup (Entrepreneurs in educational innovation) community of 2000 members in India. 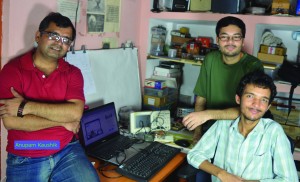 Anupam Kaushik, the brain behind the imitative is an alumnus of Ajay Kumar Garg (AKG) Engineering College, Ghaziabad, who along with brothers Kuldeep and Sandeep (Singh Dhaka) in 2014 co-founded MadResister, a startup harnessing open source technologies for affordable devices used in engineering and science education experiments.   The story of Anupam’s foray into edutech innovation is very much similar to that of several Silicon Valley successes which ‘famously’ started from garages and scratch. And who knows at a future date perhaps, he could well be case study at Harvard?
Soon after graduating in electrical engineering, Kaushik got a job in marketing robotics labs in schools and colleges with a company called Neo Robotics. He couldn’t sell much of this stuff but a few years that he spent into it, helped him develop insights into science and engineering education requirements of students and institutions.  “The experimentation and practical applications which form the essence of hands on learning in science and engineering education comes through the use of various tools and device s present in labs. However, due to their expensive nature and being high end, teachers generally discourage students from making their use or restrict experimentation. The result, a majority of students studying the science disciplines end up unskilled and face problems in working life later,” he says.  Now if the rampant practice has to be reversed then education institutions and students have to be given an alternative, which will help them to overcome traditional inhibitions and enjoy collecting data or doing experiments. This is precisely, what Anupam told Kuldeep and Sandeep who got to know him while learning about robotics. Kuldeep is a computer sciences engineering graduate and his twin brother Sandeep an electronics engineer. So, all the three joined force, energy, expertise and domain knowledge to harness open sources technologies to develop a gadget that revolutionizes laboratory experience on mass level. “Students have restricted access to labs in schools or colleges. What if they wanted to do explore, experiment and learn at home with CRO (for cathode-ray oscilloscope) , record vibrations, temperature or other data. So we thought of making a device, which will make it possible,” he adds. 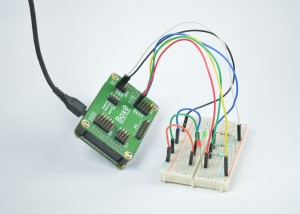 This was how the idea of Mad Resister was born. However,  making it work was not easy as there was no seed money. Aunpam contributed from his savings, insurance and whatever income he had, the other two designed sites and did other jobs to fund their venture.  The tensions and lows at times left him wonder if they were the only ones chasing a dream with umpteen struggles.  And he began to search for people like them and that’s how EDIX was formed.
Holding steadfast to his idea has begun to materialize into a reality. The prototype of credit card size device they have designed and devised which they call as Mad Resister is ready and is undergoing beta testing. By October this year, they will be able to have 50 odd pieces for demonstration and as samples. And they hope to receive bulk orders which will facilitate commercial manufacture of the device by next year. “It would be priced at about Rs 5000 a piece in India, which is very cheaper, compared to Rs 60-80,000 for similar scientific experimentation devices in labs. We are aiming for a ‘Lab in the Bag.”  From biology to agriculture, physics and engineering, this device will find multiple applications and be a game change in making science education more engaging and interesting,” he hopes.
While helping his own cause, Anupam has linked hundreds of edutech enthusiasts together, who not only appreciate one another but share practices, tips and support information. With cloud and IoT being touted as the harbingers of next virtual revolution, likes of Anupam Kaushik deserve cheers.