CPI (M) leader Sitaram Yechury while initiating the short discussion on the New Education Policy draft inputs in the upper house of the Parliament, Rajya Sabha on August 11 evening criticized the draft inputs as unreflective of the education needs of the country and went to the extent of trashing the claims of the ministry that the draft is a result of widespread consultations at various levels across the country. He said the draft is a copy of the RSS inputs from the 3-day international conference on ‘New Education Policy and NAMODI Framework’ held at Amarkantak (MP) from July 11-13. 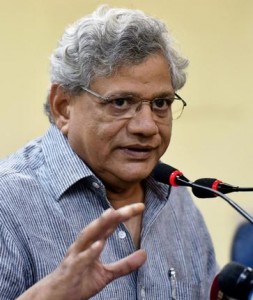 In his over 25-minute passionate and well informed speech, Yechury heavily came down on the government for what he called 3Cs—centralization, commercialization and communalization reflected in the draft. “History is becoming Hindu mythology and Indian philosophy is become Hindu theology,” he added. He was equally lucid at why the people who are so found of our ancient heritage and knowledge tend to ignore the next 400 years (periods of Buddhist empires and Mughals). “Don’t go halfback but imbibe best of all,” he said adding,  “Education defines the character of nation and its people. Unless you universalize education, you can’t reap the potential of country. All developed countries have universalized their education,” he said. Yechury also questioned the government intent when it says that instead of setting up new institutions, it would expand capacity of current institutions while expenditure is involved in later as well and there is marginal difference. He urged the government to deal with education policy seriously.
Former HRD minister Kapil Sibal who controversial remark, ‘throw it into dustbin’ didn’t go well said it was directionless and thoughtless exercise. “Education is and must be ideology neutral but they have safronized every post (head of institutions) in the country,” he said. According to Sibal the draft does little to address access, quality and equity issues. Former VC of Pune University and member of Planning Commission, Narender Jadhav he is appalled at the omission of values of social justice, egalitarianism and socialization. He also made a mention of a move at setting local parameters for RTE Act compliance made in the draft inputs. Anu Agha was of the view that India should not shy away from international surveys and should take part in PISA, which would in a way help us in knowing where we stand.
Ravi Prakash Verma, Samajwadi MP, known for his passion for the cause of education and a great supporter of RTE reminded the house that the 27 years (1920-1947) gave rise to a new India where people really came together and rallied against the British and a new set of values emerged that defined the generations after freedom. “For the first time in the history of India all became equal and free to dream. That dream is today under threat. Why are we fighting on petty issues, why as a great and old civilization aren’t we able to solve our problems. Why should a graduate, PhD, engineers rate themselves poorly and apply for a class 4 job (in reference to 28 lakh people applying for 400 posts of peons in UP recently). There must be a key to this locked situation. And that is to take care of our children. Investment in children has smart returns for societies,” he added.
In his speech K Rehman Khan of Congress warned the government of tinkering with Article 29 or 30 of the constrictions providing for certain rights for minorities. He said madrasas are as good as gurukuls and be given same importance. He said that first President of India Rajendra Prasad was educated in a madrasa. He mentioned the first education minister and freedom stalwart Maulana Abdul Kalam Azad, again a product of madrasa and easily the best education minister of India till date who rejected creation of Pakistan and laid foundation of institutions in the country in education, culture and science that have not only become nation’s pride but define our global standing.
Former hockey India star, Dilip, Tirkey, now a BJD MP called for having a national sports education policy and marks (scores) for those sports playing students who play well and bring laurels to the institutions. JD (U) MP Ali Anwar said that Doon culture (privatization) has spread all over and attempts are made to impose labels and rake up emotional issues for polarization of society. “Every type of diversity, religion and region must be respected more so through education,” he added. He also raised the question of shutting down the library at BHU during night although in prospects there are even claims for providing transport to girl students during night. Honesty and integrity should be the core value of education but see in name of digital India our youth have resorted to stealing to please their girl friends.”
Meanwhile RTE Forum, which convened a meeting of parliamentarians in the capital on RTE and New Education Policy, expressed its dismay over the way RTE is discussed in pieces in the draft inputs. “So far from this government no commitment was reiterated to RTE at any level including from the PM, which is worrying. The way discourse of education is being changed to undo the gains of the long years of struggle,” says Ambarish Rai, national convener.