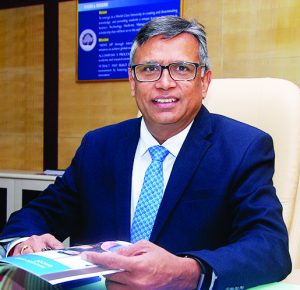 Prof Sandeep Sancheti, vice chancellor, SRM Institute of Science & Technology, Chennai ( formerly also known as SRM University) was elected as the 97th president of the Association of Indian Universities (AIU) and assumed office on July 10. (AIU established in 1925 has 720 HEIs as its members and represents universities of India. It acts as a collective liaison agency on their behalf as also facilitates coordination and consultations among its members.)

Autar Nehru met the new AIU president to know his views on Higher Education Commission of India (Repeal of UGC) act draft and also on his new role.

How do you view the government’s move at scrapping University Grants Commission and replacing it with a new Higher Education Commission of India?

For last 60 years UGC has rendered a good service as is evident from the fact that Indians have done well here and abroad,  are sought after everywhere and it implies higher education system has done something good and all under UGC.

However, the bigger problem or challenge that UGC faces is on account of the spurt in GER in higher education, from 2011, we have enrolled more than 200 times more students. On face of it the nature of technology change has affected universities all over the world, the education delivery has gone change, and the student aspirations have newer elements. The diversity of courses, diversity in the way of teaching, online education, digitization, require many changes at the end of regulator in terms of new protocols, rules, guidelines, mentorships etc. Whether a body redefines itself or is replaced by a new to satisfy the change is one and the same thing.

At the same time, several commissions or committees from NKC to Prof Hari Gautam Committee have made a case for changes with this focus or that focus. Remember both Prof Yash pal and Hari Gautam were former chairperson of UGC.  The work at UGC had become clumsy and it was being felt that scaling up of higher education and growth of universities was hindered. So my understanding broadly is there is a need of a new robust framework and if we do it in old garb, the same changes might not look convincing or fresh enough. Like everything is recycled, UGC can also be better born in a new avatar.

There are some people who say the new bill has been made in haste and it needs deliberation?

It is a weak argument. As I said two former UGC chairmen have recommended change. UGC has itself felt it.

Did AIU made any suggestions on the draft Act that was kept for suggestion from June 28-July 20?

We made some small suggestion in the review. But some time back we did give our suggestion to NEP committee. Generally speaking, we mainly suggestions were  on strengthening autonomy, providing level playing field, speedier decision making (governance aspects).

But it will be same set of people, same mindset and same work. How much difference will change of name make?

Certain things settle with time. What the government or bureaucracy did was whatever came in terms of anything new in higher education was thrust upon to UGC, which in a way got burdened and lost perceptional focus. NAAC was part of it, distance education was there and so were other things. But the realization also came and decentralization also started to take place. RUSA was one way of reducing the UGC work of disbursing grants.  Finally if the change happens or not is not a concern till the time our demands and concerns are addressed by whatever agency.

But RUSA has also failed in the sense that lot of funds remain unspent?

Education is concurrent subject, everybody is learning. Before RUSA, UGC was abused. But when the same power was passed on to states, the same ‘inefficiency’ resulted. So, everybody is learning without accusing one another.  As I said things will   take time and gradually settle down, Washington Accord has settled down NBA, empowering is happening, deregulation is happening, decentralization, distribution is taking place.

It is like when the child grows up, he or she needs to be set independent, so these things gradually settle with time. At least now the critics of UGC who abused it learnt by their experience that they are also in the same boat. UGC itself is very open now. In recent days it has become liberal on section 12B, it has opened up common resources and lib resources which are costly are now also available for level playing.

Private universities in particular cribbed and were not happy with UGC and alleged discrimination?

No I won’t buy that. Some private players resorted to shortcuts an indulged in rule flouting. Everything is obvious, how some of them increased seats here and there, didn’t follow legal nomenclature of course programs, entered into dubious foreign collaborations.  The regulator had to exercise control.  In nutshell, those didn’t work with diligence and accordance with rules, started and also shut down. Also, some private providers took it as a business and modeled it that way. But world over education institutions don’t work on business model. So, who came with bad intention had to windup?  That is one part. The others have prospered by adopting business equivalence model.

What is this model?

Market place is the driver of change. Education is a sort of business model now. You have to do marketing to attract students, looking into financing to sustain and grow. You have to introduce courses as per new age needs and student aspirations. Make products which are accepted and saleable in the market.  You have to be unique and may be cutomize. The best model will remain a challenge even in times to come as the world changes in Education 4.0 era.

For private sector, getting grants is an issue?

In the developed world, higher education institutions run on a different model and I believe we have started with these IOE (Institutions of Eminence) and category 1 institutions. You can decide your fee. In India, fortunately, parents save for proper education of their children. Money is not an issue. Bank loans, soft loans, education loans, and scholarships are there. For those who can’t afford, scholarships are a way of doing it. We at SRM give away about Rs 30 cr by way of scholarships.  The grants regimen has been liberalized. So, the challenges will be overcome.

Broadly speaking, how are we different from the developed education systems in other countries?

India we have a reverse model of this. School education is costly and of poor quality. But higher education is highly subsidized and attracts students who would otherwise purse their own passion and choices.  We will have to reverse our model and correct the flaws.

Coming to your becoming AIU president, what will be your priorities?

India is aspiring to be a sporting nation; we should be physically fit and should get accolades like winning some Olympic medals. For that higher education is the breeding ground because at 16-18 medals can be won in a few categories like gymnastics but bulk of professional athletes, sports or games takes place in the age bracket of 18-25, and this when young men and women are in our institutions.

We need to support that proactively, tell our people to nurture and handhold youngsters, educate our vice chancellors and teachers how to support such special needs and groups, bring in more awareness.

In terms of capacity building, why AIU is emphasizing on foreign collaborations?

If you are new institution or don’t have a particular expertise or area of strength, you look for partners. This is why MoUs remain best option. I don’t know how many people would remember that our IIT system developed through this model only. IIT Bombay through Russia (then USSR),  IIT Madras Germany, IIT Kanpur USA, everybody got help 60 years back. But after that do you remember any name  and did any other get handholding when they were born. Or when IITs became big themselves,  did any of these help any new ones. That handholding than nationally came through international collaborations. It has its own advantages of getting exposed to good models and practices.

Speaking for myself, till the time I hadn’t international exposure, I also used to think that classroom teaching/learning is about completing syllabus course, making students sit for 40 hours and orient them towards exams. But when I went abroad and saw what they were doing, did I realize that this much is not required.  It is just like serving food to your child as much he can eat instead of forcibly feeding him. So through international exchanges you get new ideas and thinking also. So we are laying a lot of emphasis on MoUs for capacity building of our members

What is one message that you would like to give HEIs?

To understand the autonomy, use it effectively is a major issue. More things we have learn through self learning and regulation. Nobody can let you organize your own race and be the winner. The race has to be set by someone then only you can you be a winner. Some independent body will have to frame rules and monitor. Rest everybody is king of his house or frog of his well.

Your own university (SRM, Chennai) didn’t make it to the list of IOE, What would you say on that?

We have gained a lot. When we made the application and prepared for it then we can to know what we have done at SRM. We came to know about our strengths and weakness. The exercise itself galvanized our whole set up. It was a self-learning. We came to know that we are on borderline, very very close. So after the results were declared, next day we in management decided that we’ll apply again when the window opens.  Whether we pass or fail, we’ll try wholeheartedly.

Your university being known for engineering education, lastly would like to hear from you on India churning more engineering graduates (15 lakh against 1.5 lakh vacancies)  than needed and the stated notion that most of them are unemployable.
An unemployed engineer has a better potential for job compared to any other gradute and hence engineering will remain a prime choice for foreseeable future. Reason for that is three types of skills are in demand in industry today. One is logical, computational, analytical or maths skills. Second is IT and computing skills. Third is a good communications skill. Engineering background has the first two anyway and can add the third as compared to other stream graduates.

In world engineers are actors, directors, forest conservators, civil servants, and do you know where a good number from IITians go? In financial sector, banking, investment banking, so let’s not be alarmist. Engineering is a base degree.

Yes if the number is more, market will make corrections. In a country like India you can’t cap the number or cut the line. It will be against our democratic set up.