In the coming month of April, Rajasthan Government in collaboration with GEMS Education, an international private education group of Indian origin operating several K-12 schools, brings to Jaipur the Festival of Education—a first of its kind multi-event conglomeration around education anywhere in India by a state and in the process hoping to project Rajasthan as an education destination 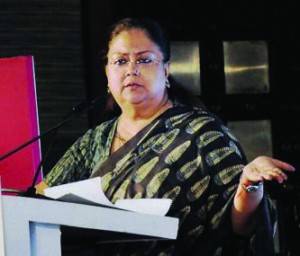 Projected as the brain child of convent educated first female chief minister of Rajasthan, Vasundhara Raje, who has evinced personal interest in bettering education status of her state after returning as the chief minister for a second time in 2013,Jaipur Education Festival to be held in April, 2017 over two days (dates yet to be announced) may bring together a galaxy of educationists, school leaders, organizations experts and other stakeholders from state and outside. In addition to a national conference and workshops,  provision will be made for eminent people from various walks of life to address students, workshops, Culture of state will also be showcased in full strength. Creativity activities, explorations and a pink zone for promoting women entrepreneurs is also planned.

At a curtain raiser event held in New Delhi on December 19, 2016, the chief minister while making public the festival plan, also said that the festival will become a permanent annual feature and will be rotated around the seven regions of the state. Amreesh Andrew Chandra, vice president of the St Pauls Trust (Gorakpur) and CEO of Chandra Education Links India, who has penchant for big ticket education initiatives and has recently joined as the Group President GEMS Education is the man really behind the idea. He hopes it would be a celebration of education in real sense and helps in defining Rajasthan as the intellectual capital of India.

Chief Minister Raje used the occasion to showcase achievements of her government in transforming the school education landscape in the state. She illustrated how a team effort right her office to school teachers and all education administrative machinery of the state worked in tandem to integrate loosely populated schools and provide them with some of the best facilities. She said there are now more 10-12 lakh students in secondary education, teacher vacancies have come down to 20% from 60%, 70% attendance is seen in parent teacher meetings and results have improved by 50-70%. “There is a huge movement of back to government schools in our state as a result of the work we are doing in making education qualitative. Quality of teaching is very important and can change lives. We are for empowering teachers,” she added.  She also shared how a simple intervention like having mirrors in schools has changed the behavior of students towards their dress sense and student looks. “When they see themselves in the morning and observe something, next day they correct it,” she said. She hoped that education story will go global and the upcoming festival will serve its platform.