The Chairman, CBSE, Shri R.K. Chaturvedi addressing at the inauguration of the National Conference on Examination Reforms for Inclusive Education, in New Delhi on August 23, 2016.

Ever since the new chairman R K Chaturvedi took over office on July 26, CBSE or the central board of secondary education, the pan India secondary education board with over 17,500 affiliated schools, has suddenly come to ‘regulatory’ life. One after another,  CBSE has started to revisit regulatory issues in the last couple of months. It began by issuing an advisory on weighty bags, which was followed by asking schools to make information public on fee structure and facilities provided against fees. Then it amended its own rule on teachers accompanying students on transport vehicles from home to school and back. Now, it has asked schools to relieve teachers of this non-academic duty and instead send women guards in their place. 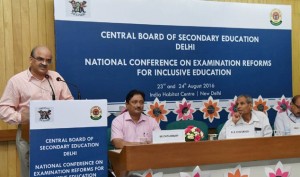 It is like CBSE awakening from slumber of years and discovering its essence and core activities. But as goes the saying ‘better late than never’, so does it apply to CBSE under the new chairman, who must be credited and encouraged to keep momentum of this new activism. CBSE over the last couple of decades had become a mere administrative body cajoled equally by vested interests and ‘smart’ educationists. It had lost its influence and regulatory teeth.

Now that it is rediscovering its core objectives, any amount of criticism even by courts must be taken with a pinch of salt.  The school system of the country is really in chaos ; it is being manipulated by a few groups of people. School education instead for masses has thrown up classes and in the long run, it is going to be dangerous for egalitarianism and therefore abet continuation of poverty and lack of development. So, welcome new CBSE!