Home Interview ‘Our only choice is to reform the way a teacher becomes a teacher in India’: Santhosh Mathew

A couple of developments to the teacher education regulator, National Council for Teacher Training (NCTE) have brought the regulator in focus yet again. While Santhosh Mathew was relieved prematurely as the chairman  (appointed this January), the union cabinet has approved  a Bill to grant retrospective recognition to Central/ State/ Union Territory-funded institutions and universities conducting teacher education courses without National Council for Teacher Education Act, 1993 (NCTE) recognition till the academic year 2017-2018, in Parlaiment to amend the Act concerned. At present, all institutions running courses such as B.Ed. and D.El.Ed., have to obtain recognition from the NCTE under Section 14 of the Act. Further, the courses of such recognised institutions/universities have to be permitted under Section 15 of the Act.

Further, NCTE has issued a showcause notice to 1,000 B.Ed and D.Ed colleges for failing to provide requisite data through affidavits. Of the total 16,000 colleges offering B.Ed and D.Ed courses, close to 4,000 failed to provide requisite data through affidavits as mandated by NCTE. These (1000) colleges will not be able to admit students. 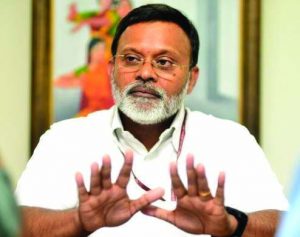 Some weeks prior to his premature repatriation which he followed up by voluntary (protest0 retirement Santhosh Mathew (IAS),1985 batch Bihar cadre was interviewed by Autar Nehru, some excerpts:

The narrative around Teacher Training or Education institutes (TEIs) is that of malpractices for a long time now. Everybody is talking about or even courts, what is NCTE doing about it?

First let’s understand the ground situation. The first falsehood starts when these TEIs say these are not for profit. Actually these must be so and are meant to be run on philanthropy. This class of institutions requires spending Rs 2 lakh a month per student simply to pay faculty salaries. For an enrolment of 100, you need 60 people of staff. Is any student or parent willing to pay Rs 24 lakh for training as teacher? What they take from a student as fees is at best Rs 60-65,000 for one year if not two years. So, obviously, a teacher education college can’t be run on tuition fees.

People have to bring financial resources to run these institutions and fulfill the promise they made to the student and the society. Teacher colleges have to raise money. You have to harness things like CSR, which is today more than Rs 20,000 Cr.

But there are serious allegations or say beliefs that a majority of private TEIs have thrived because of selling B Ed degrees?

Oh yes. We have or have had a class of people who have made lots of money from whatever businesses and they are black money recycling through these institutions. In the name of research, consulting and blah blah they are not only legalizing this money but seeing no harm in making some more money by collection of student fee. What is more appalling is what I sarcastically call ease of doing business. You have no-attending students, If you pay Rs 1.5-2 lakh, you  get 100% in internal assessments. And like Gold Cards if you pay more, degree is served at your home without even having a look at the college. That is why they took our recognition to be able to collect that moolah.  Problem is Pehle yeh cream tha, ab to doodh he bangaya (First it was sporadic like cream in milk but now whole milk is like this (commonplace)).

But what has been NCTE doing, it is meant to check all this?

The problem is that NCTE is extremely corrupt and its reputation is no better than the colleges it regulates (Chor bhi waisa, police bhi waisa). Being a monopoly, it enjoys discretionary powers. So, laws of economics will tell you that is characteristic of such monopolies if safeguards are not there. Our regional offices have been the sites of highest corruption. So in a way this has been responsible for this situation.

If the situation is so bad, then why make teacher qualification a must. Let schools have their own criteria for choosing their own teacher recruitment criteria?

Today we have a catch 22 situation. Schools want good teachers because parents are willing to pay and admit their children to schools that have good teachers. That market has grown with the kind the prosperity over the years. There are enough of rich and middleclass people now. Some can even pay a fee of  Rs 1 lakh a month. Such schools welcome good English speaking teachers in nice Kanchivaram sarees. Now, problem is B Ed is a must and the entire racket is here. So one solution is remove B Ed regulation altogether, however, good English and kanchivaram saree is not a condition to be good teachers. One can be a good teacher with or without this. But as a country we don’t have a choice to waive that condition. No country in the world is like that. Teacher qualifications are enforced everywhere. Our only choice is to reform the way a teacher becomes a teacher.

How will that happen? Is there any thought process going on in this direction?

World has changed. Digitalization has set in and transparency can be a reality. Earlier you collected so called experts sent them to college for three days. What transaction took place between those three and college, only God knows on what basis they would arrive at a conclusion? So, all we said is listen, do courts or judges go to the site of crime, talk to witness or collect evidence. No, they just look at it sitting in court. Same way, we have separated evidence collection from evaluation/assessment from each other by putting a sort of iron curtain, a Chinese wall between the two. The way papers are evaluated in exam where you don’t know who is assessor, applying same principle, we let you know the marks and that of everybody else’s. If you feel you were better than the other, come and appeal. We have a peer review committee and look at both the things. The safeguards I talked come by transparency and ability to contest.

Earlier there was nothing to look at. Now we have digitized everything from videography of  teachers to videography of students practicing as teachers, test of their ability, attitude and skills, academic assets. You sit anywhere and access the digital platform. We will do it. The institutions will have to do certain things like digitization of library and from that we will not only know the number of books but also the velocity of their use. Digitalization will bring transparency in approvals as well. For instance earlier a person from Itanagar had all the way to go to Bubneshwar for regional office. Now applicant can do from his place so can authorities. All system is transparent.

There are court cases against NCTE. Now what you have to say on this?

Some of the colleges want to say you should have no control over us. They are basically saying that the earlier regulation said that inspect us once in a life time. Now when you changed to once in five years, it is arbitrary. Now tell me NCTE which has got a statutory powers from Act of the Parliament and is the authority  to decide  in the interest of the education of this country. Don’t pilots in this country need to revalidate their license every year? With them, a maximum of say 300 lives are at risk but here you are teaching a child for lifetime. Isn’t that more serious. Justice Verma Commission and the honorable Supreme Court wanted NCTE to reform and that is part of reform process.

But the Bihar case is curious?

Some TEIs managements went to court saying have this love story with NCTE, how can district administration inspect us after the state government ordered inspections following toppers scam. Now the court has asked for a joint inspection which includes district magistrate, NCTE and affiliating university representatives and the inspection is going on.

Now coming to this QCI rankings, how is this process moving?

The QCI was mandated by the union cabinet and as I said digitalization is at the heart of it. We have collecting and verifying data from all 16000 plus affiliated colleges digitally. Based on documentary evidence-backed information/claims, these colleges will ranked in A, B, C & D categories. A category will be the top ones where basically we are saying these are best. B is ok, you can go and study there. C category colleges may be lacking somewhat and will be given a year to improve. D category colleges will be those who fail and have a problem.

March 2018 is the deadline for this process. Can we expect it to be over by then?

And I am sure even aadhaar verification of faculty salary accounts is going to spring surprises. By March we will have finished. What use to happen was that fraud colleges with only infrastructure and no students or faculty would put a board for NCTE assessment one day, pharmacy for another day and nursing etc for the next time they were inspected by the authorities. Now they will shut down on their own. Also, we have made it mandatory to put the name of the institutions in the degree certificate and by this employer will also know from where the candidate comes.  We are breaking the information asymmetry in the market by this ranking. I am hopeful even before this publication of this rankings, the bad oranges will go out.

That sounds a great relief. But don’t you think government or for that matter NCTE needs to handhold TEIs doing a great job of supplying qualified people to a teacher starved nation?

They came to us saying we are not profit. Issue is not of government providing them grants or not. Nobody asked to become teacher education institution, right. Issues is what I said that of intent and resources.  What is the problem here is the aspiration of the owners to run these colleges on tuition fees collected from students. NCTE, which charges fee for its inspections can’t be funding them.

On part of NCTE, we have started capacity building of the faculty. The interest earnings on the mandatory corpus is being utilized in these capacity building programs. The issue of vacant seats is being addressed by keeping the application window open throughout but as per  Supreme Court guidelines, we take a call only on the designated days.