The Union Minister for Human Resource Development, Shri Prakash Javadekar lighting the lamp at the 64th Meeting of Central Advisory Board of Education (CABE), in New Delhi on October 25, 2016. The Minister of State for Youth Affairs and Sports (I/C), Water Resources, River Development and Ganga Rejuvenation, Shri Vijay Goel, the Minister of State for Human Resource Development, Shri Upendra Kushwaha and dignitaries are also seen. 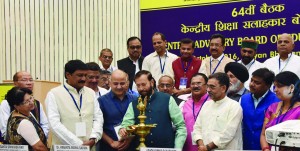 Notwithstanding evidence on good side of ‘no detention policy’ and counsel from  National Council  of Educational Research & Training (NCERT), the union ministry of human resources development is keen to amend Right to Education Act for capping the’ no-detention’ of the Ac at class V.  This was quite evident from the suggestion to this effect made at the 64th Meeting of the Central Advisory Board of Education (CABE) held on October 25 in New Delhi. A dominating view among states is that the ‘no detention policy’ has deteriorated the quality of school education and outcomes. At the end of the meeting one of the resolutions passed the apex advisory body said, “   It was further agreed that Central Government may bring in suitable amendment which will give States freedom to review “No Detention Policy.” As per the proposal, CABE wants students to be promoted compulsorily up to Class V, after which states would have the freedom to decide if they wish to hold a student back or not. Currently, no child can be failed up to Class VIII. The resolution also states that learning outcomes should be clearly codified under the rules of the Act.

The move to dilute the clause has been in working for quite some time. The HRD ministry in August referred the issue to the law ministry, seeking its advice on whether the clause can be done away through a non-legislative method instead of taking the longer route of amending the RTE Act. However, having realized it can’t be done that way, a separate Cabinet note will be moved to amend the law soon.

Earlier in its counsel, NCERT has advised the government against scrapping the policy of ‘no detention’, or automatically promoting students up to Class 8. “There is nothing wrong in the policy but what’s wrong is we have not been in a position to implement it properly, The no-detention policy has served its purpose,” NCERT director, Hrushikesh Senapathy, had said,  According to him the dropout rate has decreased sharply and 98 per cent children are in school. “Scrapping it is not the real solution. You can scrap no-detention policy but once you scrap it, dropout rate will increase. We have our view and have suggested it to the ministry, but it is not binding. This is a political decision. Quality has deteriorated, so people are thinking let us scrap this policy. But after that, what? We have to understand the problem is its implementation.. The policy should be retained while improving teaching simultaneously, “ he added in his comments to media several days before the CABE meeting. 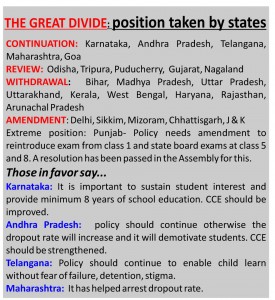 So, next academic year could be a lot more different for children and teachers. The fear of exams will return, so may drop out rate. On the positive side, we may also see the extension of RTE on both extremes (pre-schooling as well as secondary classes) and some improvement in learning outcomes, perhaps!