Home Latest Posts Under provisioning of Public Education has co-relation with Quality, but nobody is talking it 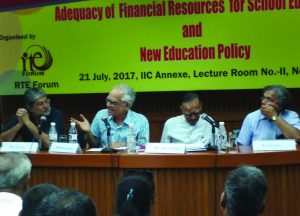 At a national consultation meet organized by RTE Forum, a collective of national education groups and networks in New Delhi on July 22, a study of 10 states made by CRY (Child Rights & You) and Centre for Budget and Governance Accountability (CBGA) made it clear that under provisioning of public school education is a big factor in poor quality of education. The undercurrent was that financing  of education has gone out of debate and is missing from public discourse.

“We were struggling for evidence so far to tell the government that you are under spending on education because whenever we tried to convince finance ministry before budget or otherwise they would give under utilization and other arguments to push us on back foot. This evidence can now help advocacy groups to be more effective on demanding adequate financing,”   said Komal Ganotra, Director, Policy Advocacy and Research at CRY India (Child Rights & you).

As per the CBGA analysis, the whole narrative of education is circling around quality with little focus on financing.  Hence the focus of education policies is eventually shifting from input based to outcome based. The NITI Aayog in its action agenda for three years has strategized its action agenda for school education keeping ‘improvement in learning outcomes’ as central objective without  taking into consideration the things contributing to quality like enabling school environment, teachers equipped with capacities and learning materials to facilitate learning in class rooms, efficient review and monitoring mechanism along with equitable and stimulating curricular and pedagogic processes are key to ensure quality education.

The five-point evidence put forth in the study include lower budgets for school education, no uniformity on per student cost between different types of government schools, huge gaps between in fund approved by MHRD on SSA to states and finally allocated by the ministry of finance, a continuous decrease in SSA budget by the MHRD of which more than 60% is financed through education cess  and a study of 10 states (Bihar, Chhattisgarh, Jharkhand, Karnataka, Madhya Pradesh, Maharashtra, Odisha, Rajasthan, Tamil Nadu and Uttar Pradesh) showing underfunding of vital components of school education.

The analysis reveals that inter se allocations have been stagnant over the past four years. After implementation of RTE in 2010, the school education has just increased by 0.2%tage point. In fact the estimated Rs 2.31 lakh Cr recommended for RTE implementation in five years which comes to about Rs 45,000 Cr a year has not been adhered to.

The study also found huge disparity among states on per child expenditure on school education. Only Goa and Kerala spend more than the Kendriya vidyalay (Rs 32,263 per year), while as a number of states including Bihar, Jharkhand, West Bengal and UP spend less than Rs 10,000.

An interesting observation made in the study is that the ministry of MHRD is not able to keep its commitment to states. The approvals agreed to in PAB (program approval board) for SSA becomes much less and in some cases half in the approved outlays from the finance ministry. For instance in 2016-17 the PAB approval for SSA (central share) was Rs 46,702 Cr but in budget allocation, it was Rs 22500, which is 48.2 % of the former.  The study shows it was a pattern for all the 10 states it studied. The study also after looking at NSS data wondered if indeed elementary education was free in India as even a rural household is spending Rs 965 out of pocket for a child studying in a government school. The figure for unaided schools is quite high.

“While the collection of cess began as a measure to inject additional amounts to supplement government’s own support, it grew to be more of a substitute. A CAG audit report shows that SSA budget for 2014-15 (Revised estimated) had been reduced by Rs 5256 Cr against the budgeted provision of Rs 27,575 cr due to lower collection of cess,” says the report adding that with the implementation of GST, how the education cess will be used is not yet very clear. Closing balance of cess will not be carried forward in GST as it is not covered by the definition of ‘eligible duties and taxes’ under GST Act. In this scenario, the question arises whether it would be prudent to plan for soliciting 60% of SSA budget from collection of education cess?

Based on government data, the study shows there is a shortage of more than five lakh teachers at elementary level and at the same time 14 % of government secondary schools don’t have the prescribed minimum six teachers. Recruitment of additional teachers has not kept pace with the rapidly growing enrolments. It also reveals that expenditure on teacher training by the selected sates except for Bihar (which spends 1.6 of education budget on this)  is abysmal or negative.  17% of DIETs do not have their own building, 40% don’t have hostel facility and many faculty position in them are vacant all over. Inadequacy of provisioning in DIETs impedes capacity development at sub-district levels, thereby adversely affecting the process of curricular reforms, onsite academic support, and supervision and monitoring.

According to Prof Praveen Jha, professor of economics at JNU, while advocating for adopting education financing on unit cost bottom upwards says all available benchmarks are inadequately designed to provide an escape route to government.  The message being sent is that if government can’t do it; let’s give to private sector while as nobody realizes that we end up paying more as society for the same service through indirect taxes and subsidies.

“The issue of universalization of education has not been raised in CABE after 2009-10 and finance has been kept out of debate. We need to arrive at a unit cost in a bottom up approach if we want adequate provisioning for education, which is critical for quality of education,“ he adds.  In view of Prof R Govinda, former VC of NUEPA, the country’s economists have failed to make an impact with education and most of people fail to understand that school is a place where teacher engage with children. He said we need give a human face to what inadequacies mean and how it impacts our children.

According to Prof Krishna Kumar, former director of NCERT, today there is a contrast between 2002 and 2009 when RTE received support from all quarters. That momentum unfortunately didn’t throw up leadership in states and today education ministry in states is seen as the most unwanted. He recommended that we need to galvanize states and don’t get bogged down by the word ‘national’ in the policy. He suggested constitution of state level education advisory committees much like the CABE and recovery of institutions. “Our contact with past literature has become feeble. The advocacy has lost its teeth. We need to study how Kothari commission and other committees worked and what are unfinished tasks from them,” he added.  The problem is the government and others don’t consider the real problems as problems, how will they accept the challenge of solving them? There is vast gap between rhetoric and reality.

Let’s hope as Ambarish Rai, national convener of RTE Forum put it, make realize the government and society that education is indeed a priority so that adequate resources are available besides a change in the mindset.