While there is clearly a growing clamour for rolling back the four-year university undergraduate programme (FYUP) of the university of Delhi (DU) introduced only last year after a controversial courtship of nearly two years, the reasons for scrapping be it the electoral politics of Delhi state assembly where elections are likely to be held later this year or ensuring ideological survival at the university campus, are not convincing. The rare unity on the roll back among the various protesting ideological divergent teacher and student groups makes it look that FYUP was a bad idea. However, one must be reminded that the issues and objections these protesters are now raising were very much there last year as well. For more than six-months from December 2012 to May 2013, ‘Save DU’ campaigners tried every trick and means available to stall its roll out, but obviously its merits far over weighed its objections and the then union minister of HRD ultimately sided with the DU vice-chancellor, Prof Dinesh Singh. 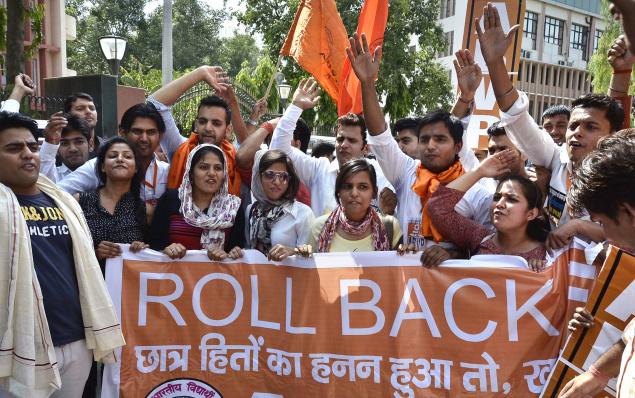 Those who believe in its scrapping the new degree programme, on surface cite a rationale which says an increased burden of fees and studying expense for an additional year for students of DU is unjustified given no other university in the country does it. They also say that it would also jeopardize the mobility within the university system as students of other universities can’t migrate to DU and vice-versa. Further, a section believes the concept of FYUP is imported from USA and will vitiate the legacy and culture of a 92-year old prestigious central university.
With the Aam Aadmi Party or AAP with an inherent penchant for going for a kill through populous promises, having made it amply clear publicly that it will fight for FYUP roll back on the ‘flimsy’ ground that it was not done democratically, the BJP which is sensing power in the Delhi state, has hardly any incentive to back FYUP. Now with all odds against FYUP, should it face a death in its infancy, is a question every citizen caring for this country and people must answer after applying much thought. No doubt that the overwhelming protester community comprises of educationists and students, but the challenges before the country are such that unless you better the education system, these will become more daunting and bigger. Questioning the questions is what a university is essentially for and certainly not for continuity or gridlock. As a teacher of the DU puts it, if a central public university doesn’t innovate, looking for solutions, which institution else, will do it. ‘For God sake, please don’t satisfy only your ego and camouflage your power thirst though these protests,” he says. Of the 65,000 regular students that get admitted annually to the colleges of DU, a sizeable percentage drops out before completing the degree course. The fee (for additional year) of DU is a non-issue as in comparison to any private college, it is almost nothing. FYUP is a well-researched scheme. When we are not tired of saying that skills education should be mainstreamed or embedded within the academics, why should anybody have an objection if this welcome change comes from a university system? There is nothing utopian about even the ‘sacred’ 3-year degree scheme, so there might be shortcomings in the FYUP, which will go away as the concept moves with time and practice. If one thing India needs at present or for couple of decades is millions of jobs, job creators and innovators. And they will not come from Mars, university system will have produce them. Having a vast army of educated unemployables is a bad choice. That is what the existing 3-year scheme does barring a few exceptions.