The Prime Minister, Shri Narendra Modi at BHU for the launch of the Madan Mohan Malviya National Mission on Teachers and Teaching, in Varanasi, Uttar Pradesh on December 25, 2014. The Union Minister for Human Resource Development, Smt. Smriti Irani, the Minister of State for Culture (Independent Charge), Tourism (Independent Charge) and Civil Aviation, Dr. Mahesh Sharma and other dignitaries are also seen.

On December 25, 2014, the union ministry of HRD (education ministry) launched the much awaited national mission on teachers and teaching with an estimated overlay of Rs 900 cr over the 12th plan period (2012-17). Announced, first in the union budget proposals in June 2014 and christened as Pandit Madan Mohan Malviya National Mission on Teachers and Teaching, the mission subsumes various current central government schemes across education sub-sectors (higher & school). Clearly a welcome development given the crisis like situation over acute shortage of teachers and lower teaching quality in the country, much of the outcome will depend on innovative and holistic approaches the mission leaders adopt than purely going by  norm driven engagements. 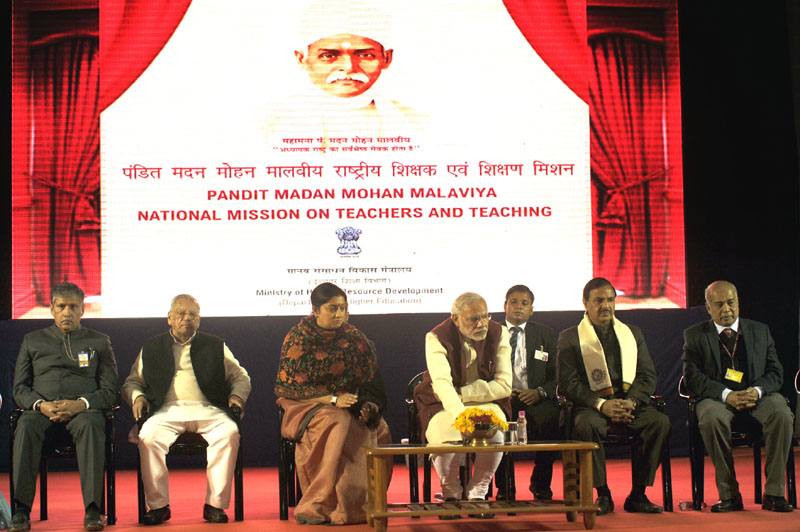 Coinciding with the 153rd birth anniversary of iconic freedom struggle leader Pandit Madan Mohan Malviya (1861-1946),  a Bharat Ratna (the highest civilian award in India), who founded Asia’s largest residential university, the Banaras Hindu University (BHU) in 1915 and was also a four-term president of the Indian National Congress besides a seasoned journalist and Hindu nationalist, the Government on December 25, 2014 launched a Rs 900 cr scheme for improving teacher quality in the country during the 12th plan in his namePandit Madan Mohan Malviya National Mission on Teachers and Teaching. The new scheme is an umbrella scheme which will create synergies among the various ongoing initiatives on teachers and teaching under the union ministry of HRD and other autonomous institutions. The Mission would focus on the whole sector of education without fragmenting the programmes based on levels and sectors as school, higher, technical etc. The Mission among its components  would have  30  Schools of Education (in Central Universities),  50 Centres of Excellence for Curriculum and Pedagogy, two  Inter-University Centres for Teachers’ Education, a National Resource Centre for Education,  five Centres for Academic Leadership and Education Management  besides provision for innovations, Awards, Teaching Resource Grant, including Workshop & Seminar, Subject Networks for Curricular Renewal and Reforms.

As per a brief issued by the ministry, “The Mission envisages to address comprehensively all issues related to teachers, teaching, teacher preparation, professional development, curriculum design, designing and developing assessment & evaluation methodology, research in pedagogy and developing effective pedagogy.” Adding that the Mission would address the current and urgent issues such as supply of qualified teachers, attracting talent into teaching profession and raising the quality of teaching in schools and colleges  the statement said that the scheme would simultaneously be pursuing long term goals of building a strong professional cadre of teachers by setting performance standards and creating top class institutional facilities for innovative teaching and professional development of teachers.

It may be mentioned that as per estimates about 54% teacher positions in higher education are vacant and there is a shortfall of about 12 lakh school teachers. With many a primary schools being single-teacher schools and average PTR (pupil teacher ratio) double than stipulated under RTE Act, the actual shortage may be several times than this conservative estimate. According to Dr R C Dabas, vice-president of the All India Primary Teachers Federation and also principal of Nigam Pratibha Vidyalaya, Janak Puri (New Delhi), the rolling of the mission is certainly a positive development if seen in current context. “DIETS (district institutes of education and training) don’t have staff so training is affected. New teachers are not appointed and adhocism is the rule of the day in Indian education across the spectrum. Even NCERT has adhoc faculty. Also, 90% of the pre-service teacher training is under private sector and most of these institutes as we know are only degree selling shops. So, if this mission seeks to reverse some of this damage, it is certainly welcome,” he adds.

Prime Minister Narendra Modi who rolled the mission in BHU in presence of HRD minister Smriti Irani said that “good education” is in great demand across the world and among all sections of society. He said India’s youth can fulfil this global requirement of teachers, if they are trained effectively. He also advocated introduction of a five-year training course after schooling for those aspiring to pursue a career in teaching and said the country should aim to export top-class teachers across the world in lakhs.

While the sentiments and vision of Prime Minister strikes a chord, experts are sceptical about grand launches and big money initiatives actually meeting the laid down objectives. “ India needs clear ideas, imaginative plans. It is how you deploy resources for an outcome based change and not money necessarily.  In India, teachers are taught what is teaching rather than how to teach. Most of our teachers have to cope with larger number of children, work with constraints of curriculum, infrastructure and other resources. We need to train them how to work to work effectively and overcome these constraints. Also we need to adopt to many more ways of inducting teachers than formal degree/diploma routes,” says Maya Menon of the Teacher Foundation, Bangalore. Prof Sanjay Dhande, former IIT Kanpur director opines, “The mandatory PhD provision for being a teacher (in higher education) is a conspiracy by the academic world. You can enter the profession only after 30 years is not sync with other professions. You need to create positions where young with passion to teacher can enter and progress. Recruitments have suffered from bureaucratic delays and let’s ensure transparency.” According to Prof Gary A Tubb, faculty director at the University of Chicago, “ You need to know the difficult reasons that force Indian teachers to move abroad and probably that will also hold some answers to teacher issues here. There is a connection between research and teaching, the dynamic processes. That your laws don’t allow foreign faculty to be taken as full time may also need to change.”

The newly launched mission needs to understand clearly the national psyche and unmet needs, teacher issues and critical role of education in national development for any meaningful impact on a the emergency like situation prevalent over these issues in the country.  Teacher shortage is being felt across the education sector and it is not a numeric problem alone. As already reported in the cover story of Curriculum November 2014 edition (Looking at a Nation of Students) Prof R Govinda, Vice-Chancellor of NUEPA, India’s most respected education policy research public institution, faculty is not a monolith; low-end existence in small towns is a different scenario and a disengaged world together. “We have narrowed down on teacher. S/he is burdened and under technological stress and a big pressure. We don’t have faith in our people while as the fact is we had great institutions and teachers without the frameworks we are now talking about. There are no incubations for teachers?”

While on one hand there is so much talk on empowering women and looking at ways and means to end gender bias, teaching, a much preferred profession by women, isn’t that easily available to young women living in hinter lands. According to an activist, the bright girls from villages, hills and other places fail to acquire the mandatory B Ed qualifications as parents won’t send them to cities where training institutions exist. “They end up exploited in small budget schools where they don’t earn more than Rs 1500 a month. Their aspirations and dreams get killed,” she adds. The Teacher Eligibility Test (TET) results of recent years proved that country’s youth is not equipped with that kind of knowledge and skills. Most states even sought exemption. These are some of the issues, which need clear cut pathways of progression.

India’s education is at cross-roads as Indian society is changing with economic growth in response to youth aspirations and global changes. Vice-President Hamid Ansari while delivering the key note address recently at the Golden Jubilee celebrations of the R.V. College of Engineering (RVCE), Bangalore, said it more than eloquently. “Education is a critical tool for developing a modern economy, a just society and a vibrant polity. It provides skills and competencies for economic well-being and social mobility. Education strengthens democracy by imparting to citizens the tools needed to fully participate in the governance process. It also acts as an integrative force in society, imparting values that foster social cohesion and national identity. A well educated population, equipped with the relevant knowledge, attitudes and skills is essential for economic and social development in this century… education is a vital ingredient for actualizing the ‘demographic dividend’ and for achieving higher, sustainable and more inclusive economic growth. ..The higher education sector is plagued by a shortage of well-trained faculty, poor infrastructure and outdated and irrelevant curricula. The use of technology in remains limited and standards of research and teaching at Indian universities are far below international standard.

In recent years, the massive expansion in enrolment in higher education in the country has resulted in unbearable burden being put on the physical and pedagogic infrastructure of colleges and universities. This is reflected in overcrowded classrooms and distortion of desirable student-teacher ratios, overall shortage of teaching and tutorial space, overloading of laboratory and library facilities, and often a lowering of quality of teaching. All these issues require urgent correctives.”

The same kind of sentiment reverberated at the just concluded Indian Science Congress in Mumbai. “The demand for good motivated teachers at the university level has gone up but the supply for it has gone down”, said A.S.Kolaskar, Consultant and Mentor of the Neotia University, Kolkata. Kolaskar was speaking about the exponential growth of new knowledge, globalization of commerce and culture, lifelong educational needs of citizens in a knowledge-driven, global economy being challenges of our times in the arena of higher education. He presented Case Studies of Internet Impact on Research and Education, where he underlined that textbook structure hasn’t really changed as such. “We need to bring about pedagogical changes where one is thinking about the job of the teacher as not a provider of information but as someone who can tell you how to learn. Assessing children should be driven not by examinations but by competency driven credentialing. Technology should be helped to grow both parts of the brain. Children should be evaluated differently and not examined so that a great future musician does not end up in an engineering college without his wish. He also added that there should be improved collaboration between researchers through next-gen high definition Skype or Telepresence for conferences. Stressing on affordable, inclusive access to higher education by all, he put forth that while combating existing severe faculty shortages, relying on experts globally is essential.”

Teacher training is a critical area where the government needs to pay unequivocal attention in order to make a firm start. According to Samik Ghosh, principal of the Scindia School, Gwalior, while there has been good progress on several fronts in learning/teaching, the training of teachers is an area where the government needs to do more and much faster. Echoing  his concerns, Vanita Uppal, principal of New Delhi’s British School says, “We must understand that education is the only agent of socio-economic change. There is inadequate teacher training infra structure in the country. Government needs to pump more money and also look at its own successful models like sarvodaya vidyalayas etc. This has to be done on a war footing. ”

According to Madhav Chavan, the notion of teachers as government servants has to change. The 200-year old model on which school is still  functioning has to change. Barring UP and Bihar, the situation is manageable where villages are smaller and class sizes less.

Above all what is discussed, teachers and potential teachers need to be energized, eulogized, and supported. Perhaps catching them would be better.