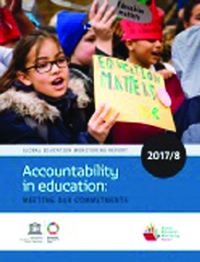 This year’s Global Education Monitoring (GEM) Report released on October 24 in Paris by UNESCO, among several key recommendations has called upon the governments to design accountability for schools and teachers that is supportive and avoid punitive mechanisms, especially those based on narrow performance measures, allow for democratic participation, respect media freedom to scrutinize education and set up independent institutions to handle complaints, develop credible and efficient regulations with associated sanctions for all education providers, public and private, that ensure non-discrimination and the quality of education and make the right to education justiciable, which is not the case in 45% of countries.

GEM report also highlights that only 14 of 34 low and middle income countries had established early childhood education standards and compliance monitoring systems. It is pertinent to mention here that India is one such country even though it has enacted a right to education for children between 6-14 years of age. A larger bench of the Supreme Court of India will be hearing a petition from Social Jurist on November 17, the applicability of RTE to early childhood education and the apex court observations and orders may turn historic in the case!

The 505-pages annual GEM report titled, ‘Accountability in education, meeting our commitments’ , second in the series that focuses on accountability is “the mechanism for monitoring and reporting on SDG 4 and on education in the other SDGs” as specified by the Education 2030 Incheon Declaration and Framework for Action.

According to UNESCO, there are today 264 million children and youth not going to school – this is a failure that we must tackle together, because education is a shared responsibility and progress can only be sustainable through common efforts. This is essential to meet the ambitions of the Sustainable Development Goal on education (SDG 4), part of the 2030 Agenda for Sustainable Development. Governments, schools and teachers have a frontline role to play here, hand in hand with students themselves and parents.

The Report warns that disproportionate blame on any one actor for systemic educational problems can have serious negative side effects, widening inequality and damaging learning. “Education is a shared responsibility between us all– governments, schools, teachers, parents and private actors,” said UNESCO Director-General Irina Bokova. “Accountability for these responsibilities defines the way teachers teach, students learn, and governments act. It must be designed with care and with the principles of equity, inclusion and quality in mind.”

“The word ‘accountability’ appears throughout the 2030 Education Framework for Action, demonstrating the importance that UNESCO and the international community give to follow-up and review functions to catalyse and monitor progress. This means also that all countries should produce national education monitoring reports explaining their progress against their commitments – currently only about half do so and most of them not regularly (India is among countries that don’t publish such a report) . Accountability is about interpreting evidence, identifying problems and working out how to solve them. This must be the backbone to all our efforts to achieve equitable, high-quality education for all,” she wrote in the foreword of the report. 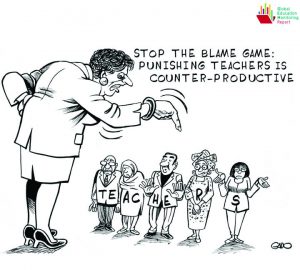 The Report demonstrates that blaming teachers for poor test scores and absenteeism is often both unjust and unconstructive. People cannot be held accountable for outcomes that depend on the actions of others. “Using student test scores to sanction teachers and schools makes it more likely they will adjust their behaviour to protect themselves, which may mean leaving the weakest learners behind,” explains Manos Antoninis, Director of the GEM Report. “Accountability must start with governments. If a government is too quick to apportion blame to others, it is deflecting attention away from its own responsibility for creating a strong, supportive education system.”

Setting and enforcing regulations ranging from contract tendering to teacher qualifications are also crucial, argues the Report. Fewer than half of low and middle-income countries had standards for early childhood education and just a handful had mechanisms to monitor compliance. There are no regulations on class sizes in almost half of countries. Government regulations are often too slow to keep up with the fast growth of private schools and universities.

The report also highlights that some of the institutional foundations have been put in place, notably the Technical Cooperation Group on the Indicators for SDG 4-Education 2030, whose secretariat is at the UNESCO Institute for Statistics. This aims to build consensus in the definition of indicators and national ownership over the process. Still, as the review shows, the international community needs to invest a lot more to ensure all indicators are well defined and monitored. There is also mention of countries of the E9 group, a forum of low and middle income countries that have committed to achieving SDG 4 and account for over half the world’s population hold the key to global reporting on learning outcomes. “Among them, Brazil, Egypt, Indonesia and Mexico contribute data at some of the three education levels, while Bangladesh, China, India, Nigeria and Pakistan do not report on this indicator at any level. It is critical, therefore, for all nine either to participate in a cross-national survey or to use their national assessments for reporting, provided they meet quality standards,” says the report.”

The establishment of an International Finance Facility for Education, initially proposed by the International Commission on Financing Global Education Opportunity, received a boost when a reference to it was included in the G20 Leaders’ Declaration at the July 2017 summit in Hamburg. Its aim would be to expand development banks’ lending capacity to lower middle income countries.

Though the report is not county specific, yet it has brief mentions on some best and worst practices/interventions/research findings from various countries. On India, the GEM report also carries some notes. While it acknowledges that following a Supreme Court ruling, government agencies in 2003 started producing extensive content on environmental education, which has resulted in over 300 million students in 1.3 million schools receiving some environmental education training. It also talks about how right-to food litigation brought before the Indian Supreme Court, prompting an additional 350,000 girls to attend. Noting  that the Akash Tablet was a disaster, the report says that  India’s Aakash tablet project, a public-private partnership that, due to inadequate government enforcement, ended up primarily benefiting the vendor. “A right to information request revealed that the programme eventually met an initial target of 100,000 tablets and was wound down quietly in March 2015. While only some Indian students received subsidized tablets, DataWind ended up a big winner. By marketing itself as a company seeking to bridge the digital divide through low-cost internet and computing access, it introduced new low-cost models in India and has been hailed as a highly innovative technology company,’ says the report.

Also, in India the action/pressure of CSO was highlighted by mentioning that the Annual Status of Education Report (ASER) has brought learning to the centre of discussions in the political debate. Between 2006 and 2017, political parties used ASER findings to ask over 70 questions in Parliament related to low and declining learning levels, dropout rates, teacher absenteeism and conditions of rural schools (ASER, 2017).

The voluminous report has several lessons for our policy makers and  as an important recommendation it has said that  adequate financial resources should be provided to fund the education system as international funding to education has declined. It has asked Governments to  fulfil their commitment of spending at least 4% of GDP on education or allocating 15% of total government expenditure. Donor countries should keep to their pledge to provide 0.7% of national income to aid. Of that, 10% should be allocated to basic and secondary education. They should be careful in making aid available through results-based mechanisms that shift risk to countries that are least prepared to bear it.

Responding to the observations and recommendations in the report, Ashish Dhawan, founder-CEO of Central Square Foundation and co-founder of Ashoka University said, “SDG-4 lays out key lighthouse goals that the Indian education system should strive towards. To own these goals and catalyse efforts to achieve them, it is critical to establish – (1) robust measurement system that generates credible and timely data on outcomes and (2) dedicated funding to spur innovation and develop scalable solutions”

According to Jerry Almeida of International Confederation of NGOs, sustainable development goal #4 requires a huge paradigm shift or mindset alteration for stakeholders like principals, educators ,school owners and parents. Quality and inclusive education is the birthright of each and every child. “I often find educators and parents who are biased towards inclusive education. They should realise that inclusive education further enhances the quality of education and builds solid character in children as it helps improve the emotional, spiritual, moral and mental intelligence in every child but teaching them empathy, compassion, love,  humanity and interdependence. We also need education reforms to empower educators and schools to create a culture of failure where students can experiment with creativity and curiosity to innovate. This in turn would create love of learning.”

GEM has also recommended governments to ensure strong institutions are in place, including those serving policing, judicial and auditing functions, with the capacity to help deter, detect and investigate corruption in education besides, governments should treat teachers as professionals. They should help build their professionalism by investing in the necessary initial and in-service education programmes and providing them with autonomy. In turn, teachers’ unions aiming to strengthen professionalism through codes of ethics should raise members’ awareness and build the skills of those entrusted with following through on such internal accountability mechanisms.

“The report has explicitly brought out very good set of recommendations and a lot of discussion material both of which are very relevant to India. Given the weak accountability and monitoring mechanism that we have here, the report has beautifully illustrated that education is primarily the state responsibility and we all need to make the government understand that. This won’t have come at a better and opportune time when the policy formulation is in progress and many things from the report can be reflected in the policy. This report has also given publicity to some good international example and India as a country can take some lessons from them,” says Angela Taneja. technical director, Education, CARE India, an international NGO, which fescues on poverty alleviation and social exclusion and has education as one of the major thrust areas. …..By Autar Nehru