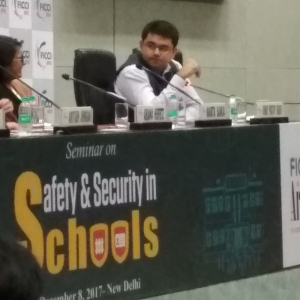 The recent hullaballoo over lax and/or neglected school safety and security regulations after a couple of on-campus incidents created widespread public outrage, is giving anxious and scary time to all school managements and school leaders particular those of private schools in India. And, not without valid reasons!  For instance, Haryana didn’t had any guidelines for schools before the September 8 (2017) murder case of a class 2 student in Ryan International School in Gurgaon and now there are a plethora overlapping sets. The Central Board of Secondary Education (CBSE) with over 18500 affiliated schools revisited its rules and came out with a set of guidelines and regulation which among other things included psychometric tests of employees and police verification including that of teachers.

With this sudden burst of guidelines, public outcry and the guilt of not knowing enough on the subject, schools have pressed panic button. In order to address this issue and create awareness in school community FICCI on December 8 organized a one-day seminar Safety and Security in Schools” to deliberate and discuss the issue.

In her keynote presentation, Divya Balgopal, senior partner, Mundkur Law Partners, illustrated how schools are caught on wrong foot despite on the right side most of the time due to lack of basic understanding of the law and conventions. According to her schools must learn the difference between criminal liability and civil liability and how it can be applied to them.

Under Article 19 (Protection from all forms of violence) of the United Nations Convention on the Rights of the Child, Children have the right to be protected from being hurt and mistreated, physically or mentally. Governments should ensure that children are properly cared for and protect them from violence, abuse and neglect by their parents, or anyone else who looks after For every child Health, Education, Equality, Protection ADVANCE HUMANITY them… As India is a signatory to the convention, the government has to be ensure this right to children, so there is no undue government interference if some people think so.

To begin with education is in the concurrent subject that is under both the central as well start governments. A school can be held guilty on counts of neglect, violence (physical and emotional), abuse (mental & physical), discrimination (caste, creed, gender, etc), economic or sexual exploitation and under consumer protection for deficiency of service.

Again, there are several regulators including transport department for road safety, child rights under department of women and child development, student welfare from affiliating boards in addition to district administration and education department.

“You may not have a guilty mind, but you have to prove duty of care,” says Balgopal while emphasizing the importance of documentation. In a law of court or before an authority one has to demonstrate and show that one had best intentions even when something went wrong. Every policy and procedure in a school must be made with benefit to child in mind and must be verifiable. The standard of reasonable care for all children, keeping in mind the interest of child and minimum mandatory obligations is a must to qualify for a civil liability in case of any untoward incident.  “Schools must constitute security and safety committees with parents also as stakeholders,” says Balagopal adding that it must be a diligent and honest work. “Your health report of grade I is not going to protect you in grade VIII? Same for teachers, if something happens to a teacher on duty, what will you do?”

Section 43A of the IT Act is another legal provision that schools need to be aware of as they are in possession of private and sensitive data and same must not be breached. The Protection of Children from Sexual Offences (POCSO) Act 2012 is applicable to the whole of India, the schools need to keep a reasonable knowledge of its provision and preferably have a committee. Under some provisions, the school has to mandatorily report on some cases. Also, the child helpline and other compliances from NCPCR and district administration are necessary to prevent, recognize, respond and report to crimes against children in schools.

Some school administrators, who have seen security evolving from what used to be the additional job of physical education teacher to now a full-fledged control rooms, having own standard operating procedure is still the best model to frame. “Take opinion of parents, teachers, support staff and senior students,” says Capt Gurmeet Kaur, Head-Admin & Operations at the Shiv Nadar School, Gurgaon.

Things can go wrong, so be prepared. According to Rohan Oberoi, CEO, Momentum India, a company in delivering emergency services, risk analysis is a must. “Look at past 30-40 years, it will give you an idea. You must understand the catch is self-regulation, you must know what you are doing and not be scared. Generate and mine data, empower yourself and your students.”

O P. Singh, IPS, Director General, CISF, who also spoke at the event said that the security of the children is a multi-dimensional issue and at present implementation and monitoring is a challenge which need to be addressed in a holistic manner. School administration should consider consulting professional risk consultants and security managers. “School administrations have to be much more proactive than other stakeholders. Make safety and security part of our DNA in while working in schools. Train staff and students, hold regular drills and table top exercises on mitigation, preparedness, response and recovery from emergency response for hazards, disasters, accidents etc. Develop a procedure,” he added.

Deputy Commissioner of Gurugram, Vinay Pratap Singh, a familiar face now in India as he is the only bureaucrat who is also the head of a school (Ryan International) after government took it over for three months following the murder of a student and subsequent violent protests, said that only those guidelines are best which are implementable and agreeable to stakeholders and therefore require dialogue and consensus. He further added that security skills council has been involved in the process of making workable guidelines and schools need hand holding in this transformational phase.

FICCI along with EY and Mundkur Law Partners also presented a framework of the proposed study, “Student Safety in K-12 schools: a Report, Primer and Toolkit”. The proposed study seeks to cover various dimensions of safety.